So, it’s pretty obvious by now that I’ve had a hard time updating Pinch My Salt since our move back to the United States. Each time I write a post, I think that I’m finally back in the groove. Then a few days pass, then a week, then a month.

But I miss blogging. I know I miss it because lately I’ve been tweeting like crazy. Yes, that’s right. Tweeting.

Alright, for those few people left in the world who haven’t yet been introduced to Twitter, I’ll do my best to explain it.

Twitter is like blogging in short bursts, without actually having to maintain a blog. It’s a a way to share your immediate thoughts with the world in a very laid-back and casual way. It’s a way to get to know your friends better and a way to peek into the lives of people you admire. It’s a way to have a conversation with the world.

It took me a long time to understand Twitter. At first, it was fun to blurt out random thoughts to a group of strangers. Then it was fun and challenging to try to squeeze my thoughts into the 140 character limit. Then, on day three, I got bored.

But I went back to Twitter, and that’s when the fun began. It had caught on with the food bloggers and all of a sudden I was following the lives of people who genuinely interested me. It added a whole new dimension to my Twitter experience.

Now I follow real-life friends, family, virtual friends, NPR news, and even Barack Obama on Twitter. It’s become a source of entertainment, news, and an outlet for an overactive mind. And, it’s become an addiction.

So when I sat down to write a blog post about sourdough today and realized that I had a serious case of writer’s block, one of my twitter pals jokingly suggested that I just post a recap of my twitter activity for the past month. I laughed at first but then wondered, “why not?” In a way, I have been writing a lot about food lately. You just didn’t know about it!

So, without further ado, here is a quick introduction to Nicole on Twitter:

7:27 am About to be elbow deep in flour…time to knead some sourdough!

9:33 am Eating ginger snaps and vanilla ice cream for breakfast. Is that so wrong?

11:07 am It’s allliiiiiiiiiiiiiiive! Only two hours after first feeding, the new sourdough starter has started growing! Much sooner than I expected!

11:08 am Just put together some dough for whole wheat sandwich loaf. Yes, I really am in the middle of three different batches of bread right now.

12:17 pm Thick, strained yogurt is a great substitute for mayo in creamy potato salads. Especially good with some fresh chopped herbs thrown in.

12:53 pm Ew. This whole wheat sourdough is not fun to work with.

2:11 pm Want Indian food tonight but can’t decide whether to cook or go out. Been baking so much today, I don’t feel much like cooking!

3:04 pm Whole wheat sourdough baguettes just went in oven. Wasn’t planning on baguettes but that’s the only shape they wanted to be!

3:05 pm White sourdough batards up next!

3:21 pm Wish I could get paid to bake, without having to keep baker’s hours 🙂

4:22 pm http://twitpic.com/236n – All six loaves of bread are finished! The house smells wonderful!

4:35 pm Found some Niman Ranch applewood smoked bacon in freezer. Rather than go out, I think we’ll have BLT’s on fresh baked bread for dinner!

And here is the result of the day of marathon bread baking: 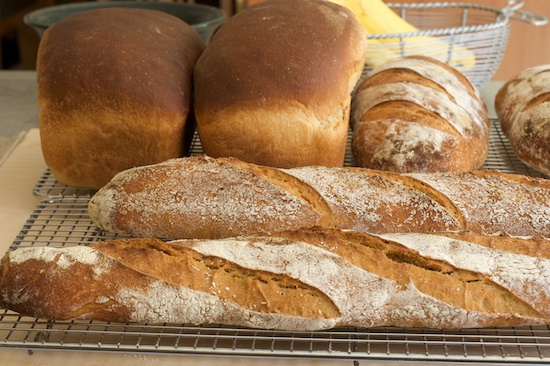 And now that I’ve conquered my writer’s block, that blog post on sourdough is coming up! In the meantime, check out the photos of my fledgling sourdough starter.

Previous Post: « World Class Chocolate in San Diego?
Next Post: Addicted to FoodPorn? A New Place to Get Your Fix »