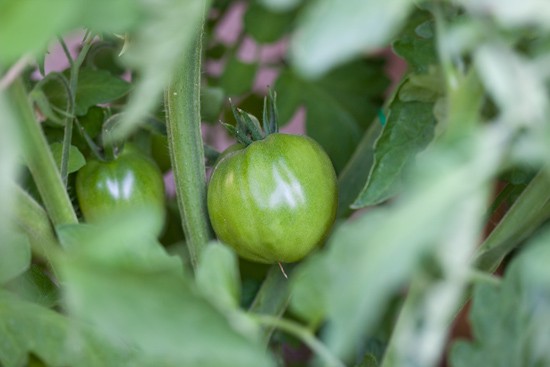 I don’t know what spring has been like for the rest of you, but here in central California it’s been unseasonably HOT.  While I’m not quite ready for summer to begin, our tomatoes and peppers sure have been loving the heat! 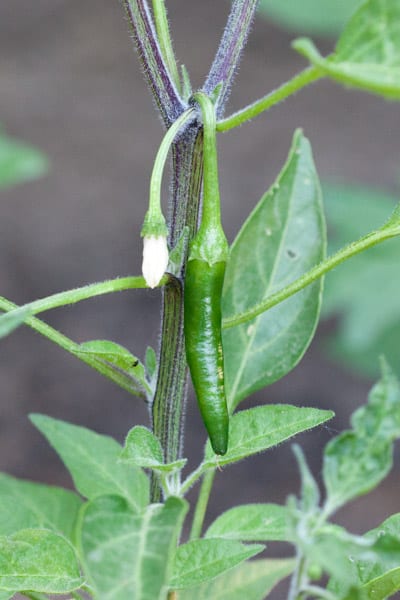 At the rate the serrano chiles have been growing, we’ll probably be able to start cooking with a few of them soon.  We were a bit impulsive and put some vegetables in the ground quite early in the season.  Luckily for us, the weather more than cooperated and we now have quite a garden growing already. 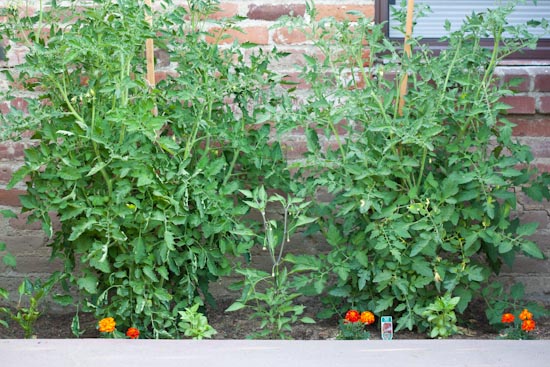 This south-facing bed is against the house.  It was empty when me moved in so we took my Dad’s advice and tried a few tomatoes and peppers here.  They love it!  In this bed we have three different heirloom tomatoes, a couple chiles, and some basil and marigolds. 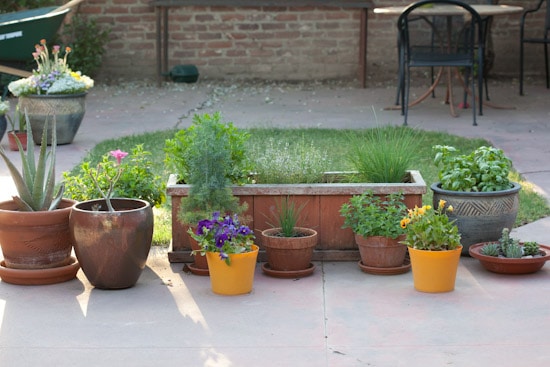 I have a little potted herb garden going in the center of the courtyard for now, but soon it will really be too hot to have these pots sitting out on the concrete so I’ll be moving them eventually.  In this area we have parsley, thyme, onion chives, garlic chives, oregano, basil, mint, and dill.  I love having an herb garden again and I’ve been using combinations of these herbs in quite a few dishes lately. 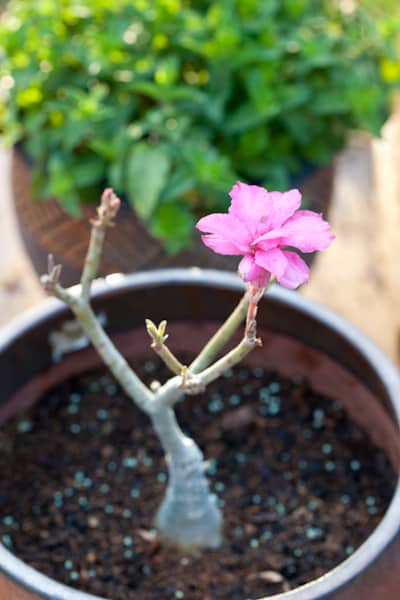 This is Phil’s Desert Rose.  Well, we think it might be a Desert Rose, but we’re not sure.  We don’t know much about it, but it’s kind of strange and beautiful and it’s Phil’s pet. 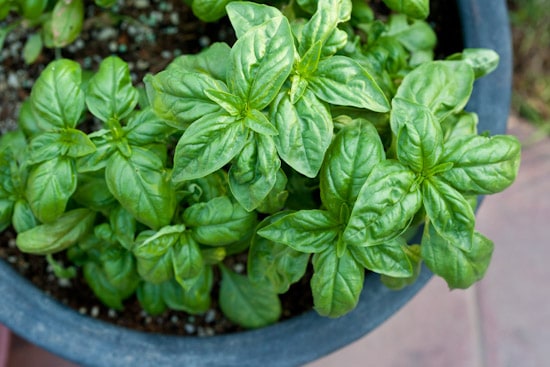 I recently harvested a ton of basil and it just keeps coming.  Pesto, anyone? 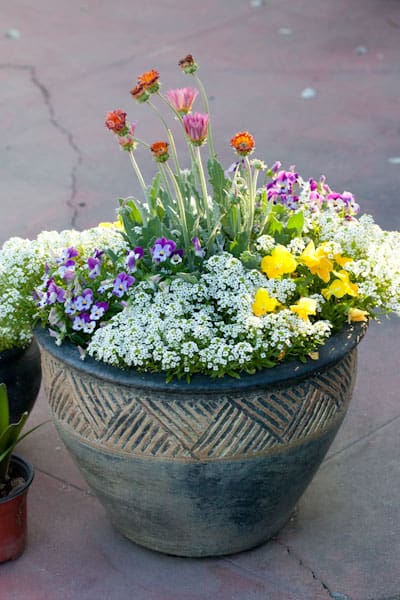 This is one of the first pots I planted this spring.  I took this photo before the daisies were even awake this morning! 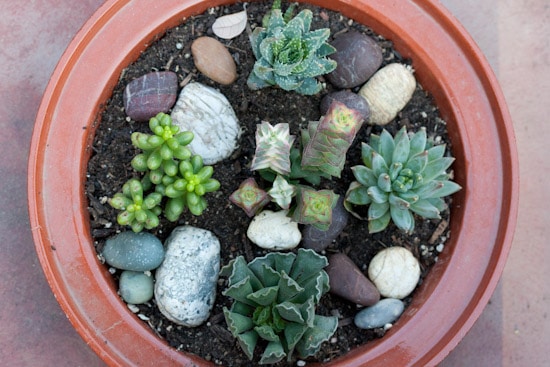 I planted this little succulent garden in the bottom part of a tagine.  The top had broken and rather than get rid of it, I asked my dad to drill some holes in the bottom of it for me and it turned into a nice planter. 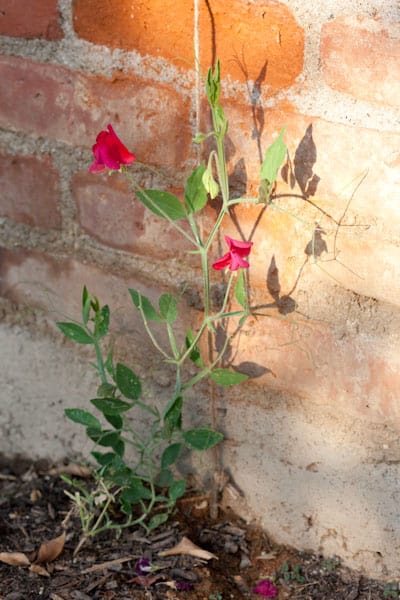 This lonely sweet pea hitched a ride to my house in a potted hydrangea that came from my dad’s house.  We transplanted it in the ground against the house to see if it would keep growing and it did.  We even supplied it with a little string to hang onto.  Next year, we’ll plant some more in this area so we can have a wall of sweet peas in the spring. 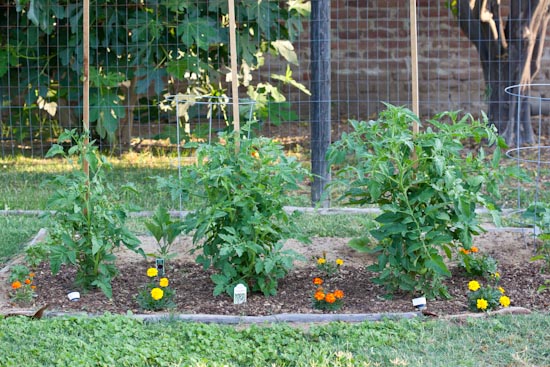 This is our new garden bed in the back.  Phil dug up the grass and then double dug this bed, which loosened the soil a couple feet deep under the entire bed.  These tomatoes went in a week or two later than the ones against the house and they didn’t grow as fast because the soil back here wasn’t as warm.  But these plants are doing well and we already have lots of fruit on both the Early Girl (far right) and the Brandywine (far left).  This bed also has basil, marigolds, and peppers as well as a few different cucumbers, an eggplant, and a yellow crookneck squash.  Behind this bed are the fig tree and tangerine tree. 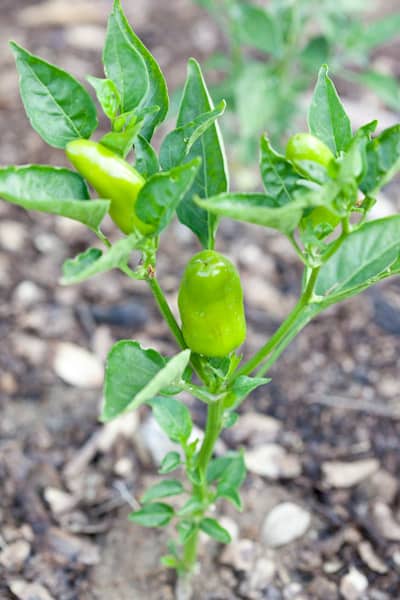 Here is one of our Fresno Chile plants.  The Fresno Chiles haven’t done well in either bed – this is the only plant out of six that has thrived.  I might try planting some more in containers because I really would like to have some to play with later in the summer.  We made some delicious hot sauce last year with Fresno Chiles. 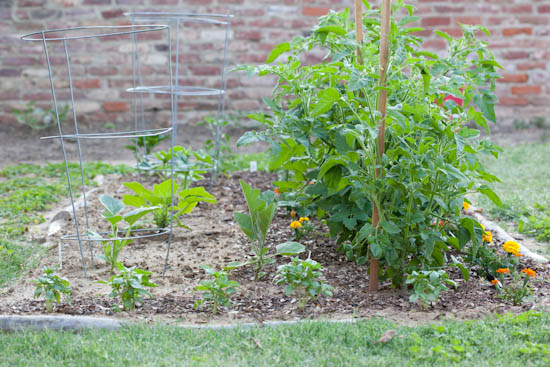 This is another view of the same bed.  The tomatoes are on the right, the eggplant is in the middle, and the squash and cucumbers are on the left.  There are several different pepper plants hidden in the back.  Those little plants in the front are basil, which will soon be growing like crazy.  In the background against the fence on the left are a couple of watermelon mounds where Phil planted his Yellow Baby Watermelons.  Also not pictured is a green zucchini that is also planted against the fence. 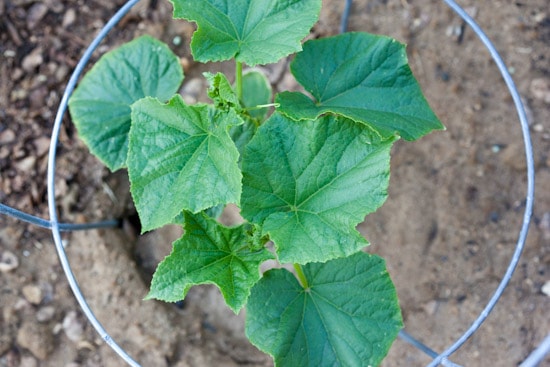 I decided to try trellising my cucumbers with tomato cages to keep them contained and growing up instead of out.  I think this one is a Japanese Cucumber.  I also have an Armenian Cucumber and a Painted Serpent Cucumber. 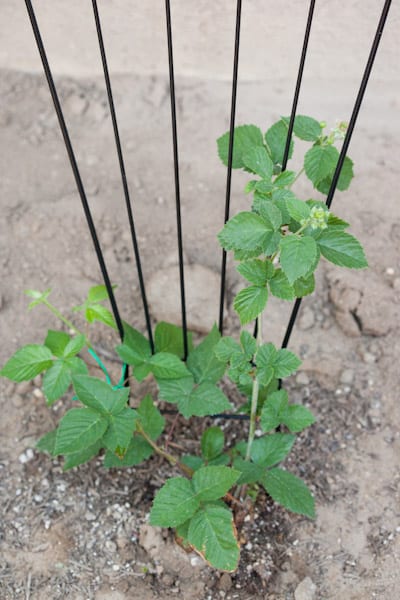 I’ve never grown berries before, but Phil brought this Black Satin Thornless Blackberry home from the nursery one day and has been tending it himself.  I hope it does well because I would love to make a blackberry pie with fruit from our own garden one of these days! 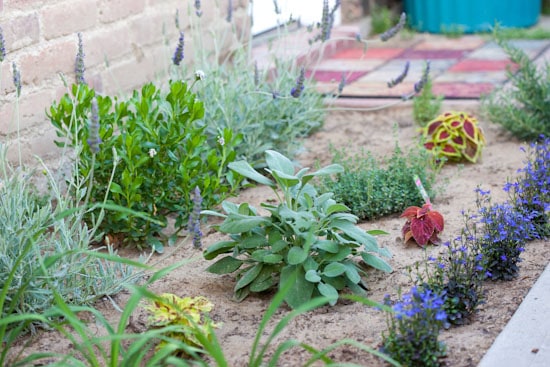 This is one of my favorite garden beds and it’s located just outside the back kitchen door.  We have a few more herbs planted here, including rosemary, sage, lemon thyme, and French lavender.

Well, that’s a quick peek into our spring garden.  Since this is our first year here, everything is an experiment and a learning experience, and we’re enjoying every minute of it!