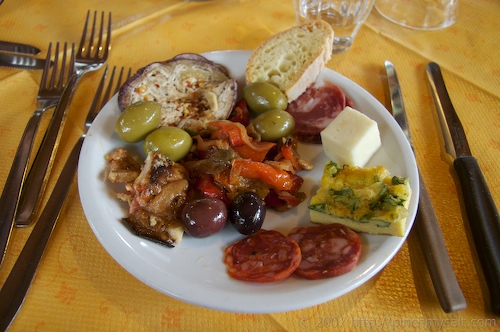 Antipasti (appetizer): Two types of salami (one spicy, one not), cheese, olives, peperonata (marinated sweet and sour peppers with pine nuts and raisins), garlicky eggplant slices, one square of something really tasty that was obviously made with eggs and cheese but I’m not sure what it’s called, and one square of something else (again, I have no idea what it’s called) that was layered with eggplant, tomato, cheese, and some other things.

Antipasto is always my favorite course! 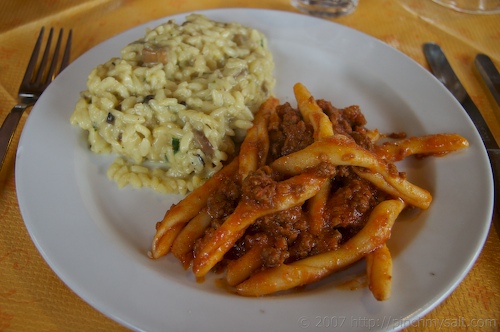 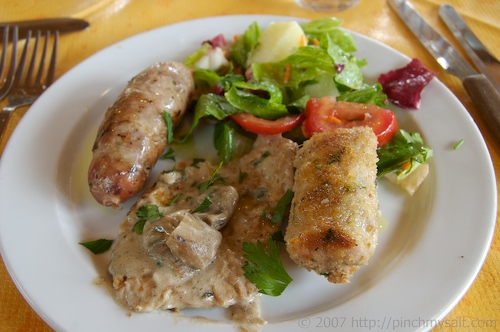 Secondo (second course): Grilled sausage, veal scallopine with porcini mushroom cream sauce, chicken involtini (thin chicken breast layered with cheese, bread crumbs and ham, rolled up, breaded with seasoned bread crumbs and fried), mixed salad. This was also really good. Justin thought this was the best sausage he’s had in Sicily and I think I have to agree. The veal was a little tough but the porcini cream sauce made up for it. The involtini was pretty standard but a little on the dry side. What was really surprising was that the salad had potatoes in it. In Sicily you’re generally lucky to find even a tomato in a mixed salad because ‘mixed’ could simply mean some lettuce mixed with radicchio. But this salad had lettuce, radicchio, tomato, carrot and potato. It was good. 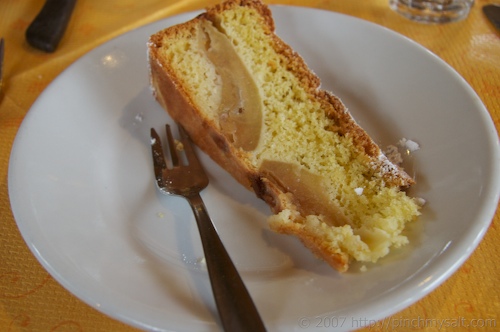 Dolce (dessert): Apple Cake. For dessert we were served a slice of torta di mela (apple cake). It was ok, but a little dry. I have to admit that I’m not a huge fan of many Italian cakes. But, I ate all of it 😉 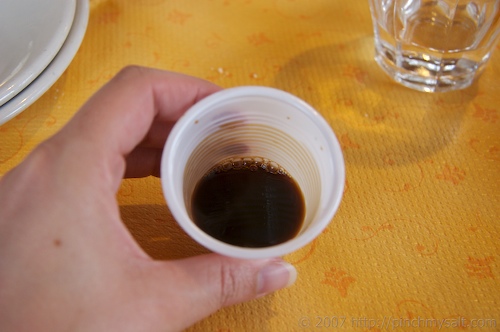 And, of course, the only way to end an Italian meal is with a shot of espresso!

I thought you might be interested to know what a typical Sicilian lunch might look like. In Italy, lunch is the most substantial meal of the day. Although most people don’t sit down to this type of meal every day anymore, it is still a must on the weekends.

Many restaurants will have a fixed price lunch like this where you just sit down and eat whatever they bring you. It’s my favorite way to dine in Sicily because you know that what you are eating is most likely fresh and local. In my experience, the normal price for this type of meal ranges between 20 and 25 euros.

The photos above show the lunch we had today in a restaurant in the small mountain town of Sant’Alfio. The town’s claim to fame is a giant Chestnut tree that is supposedly the largest tree and oldest tree in Europe. It is estimated to be between 3000 and 4000 years old. 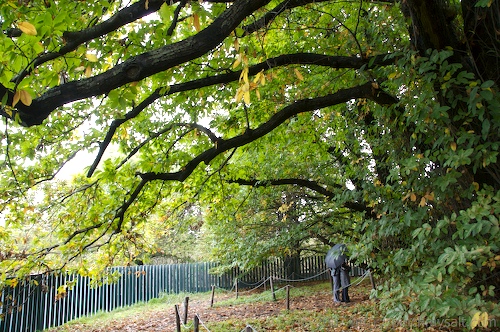 This is only one small part of the tree, it was difficult to get a shot that showed the immensity of it. But I liked this one with the couple standing under the umbrella.

We had quite a few adventures driving around Mount Etna today but I’ll have to tell you more about it tomorrow! We’ve been out all day and I still need to sort through the rest of my photos before I can tell you the rest of the story. I did, however, need to share something with you today in order to fulfill my NaBloPoMo commitment!

And just a quick reminder to cast a vote today for your Best Food Blog pick in the 2007 Weblog Awards. Remember, you can vote once every 24 hours until November 8th! If you haven’t done so already, you can go vote here.