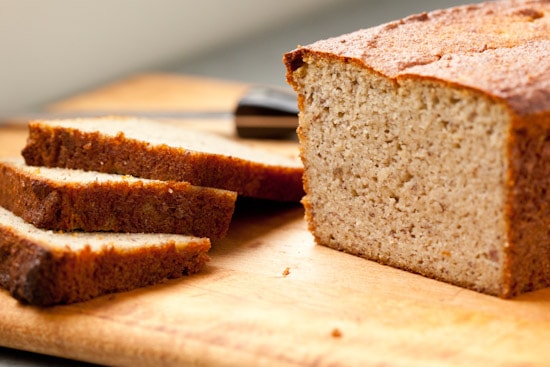 This is the second installment in my unofficial Baking with Almond Flour series that I didn’t know would be a series until today.  This afternoon I made some delicious banana bread with almond flour instead of wheat flour.  It’s wonderful!  Phil has unfortunately had a hard time adding grains and dairy back to his diet and for now still feels best on a pretty strict Paleo diet.  I’m experimenting with this grain-free baking mostly for him since these tasty treats are very calorie-dense and don’t fit into my Need to Wear a Wedding Dress Soon Diet Plan very well.  It’s hard for me to stop at just one tiny piece of banana bread!

As for the rest of my diet since finishing the Whole30 Challenge, I’m now gleefully eating cheese and other dairy products again and I have felt fine with rice and corn, although I haven’t experimented with eating wheat or other gluten-containing grains again yet.  We’re both still eating as little sugar as possible because it makes us both feel pretty terrible.  So far, I’m still experiencing the benefits gained during the Whole30 Challenge, despite adding the dairy and occasional gluten-free grains back in.  My skin is still perfectly clear as long as I don’t eat too much sugar (Both times I ate candy, I woke up with a pimple).  So it appears that for me, good quality dairy isn’t a problem, gluten-free grains aren’t a problem, sugar is definitely a problem, and wheat is yet to be determined.

Now about this banana bread.  It looks great, doesn’t it?  It IS great!  Since I’m so new to grain-free baking, I’ve been following recipes from some of my favorite grain-free bloggers, Elana Amsterdam from Elana’s Pantry and Carrie Vitt from Deliciously Organic.  This Paleo Banana Bread comes directly from Elana’s Pantry. 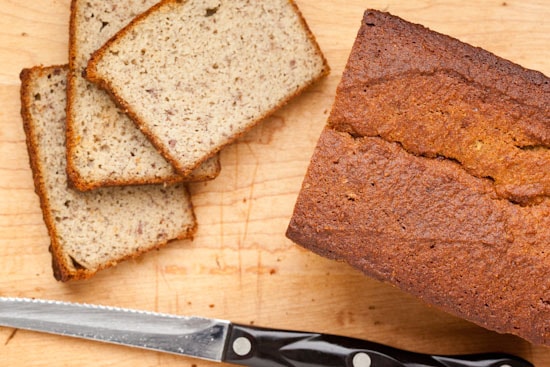 Many of Elana’s bread recipes, including this one, are tailored to fit a very specific loaf pan (7 1/2″ x 3 1/2″) that most of you won’t have on hand.  I happen to have one because there are several of her bread recipes I eventually want to try and because I kind of have a thing for new loaf pans, so I ordered it from Amazon.  I honestly see no reason why this can’t be baked successfully in a standard 8 1/2″ x 4 1/2″ one-pound loaf pan.  The slices will be a bit wider and shorter and you might need to shorten the baking time by a few minutes.  If you have mini loaf pans, you could divide the batter between 2 or 3 of them and again, shorten the baking time.

I really wanted to follow Elana’s recipe to the letter, but this morning I forgot that I was saving bananas for bread and accidentally ate one for breakfast.  So, I only had two bananas where the recipe called for three.  My solution was to add a couple tablespoons of maple syrup to make up for the sweetness and moisture another banana would have provided.  I might have just increased the honey from one tablespoon to three instead of using maple syrup, but it turned out that I only had exactly one tablespoon of honey.  That’s just the way things go in my kitchen.  And guess what?  The bread still turned out perfectly.  If I hadn’t scooped that almond flour myself, I would have never guessed that this wasn’t traditional banana bread made with wheat flour.  The flavor and texture is spot on.  One thing I will say is that this bread is less sweet than most banana breads, but I’m getting used to having less sugar in my life and I think it’s absolutely delicious as is.

The almond flour I used for this bread is Honeyville Blanched Almond Flour, which I ordered and tried for the first time last month while we were doing the Whole30 Challenge.  It’s wonderful stuff.  So far I’ve used it for baking and also for breading chicken.  The texture is so much finer than other almond meals and flours I’ve tried in the past.  I divided mine up and keep some in the fridge for immediate use and store the rest in the freezer.

So that’s it, another successful grain-free baking attempt thanks to another great food blog recipe.  If you’re interested in baking this bread or just checking out the recipe, head to Elana’s Pantry for her Paleo Banana Bread Recipe.