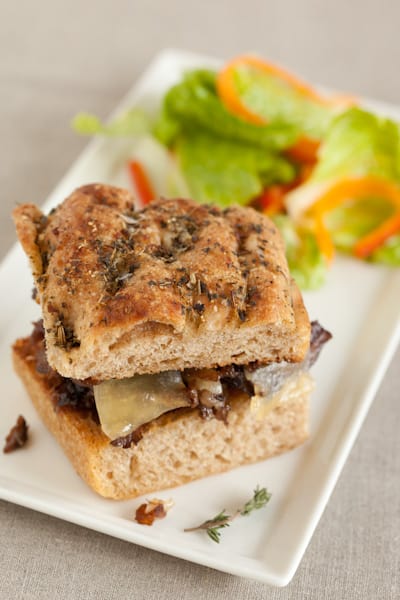 Did you watch the Super Bowl yesterday?  Did you eat way too much junk food and/or consume a few too many adult beverages?  I bet a lot of you did.  While I didn’t drink (or watch much of the game), I took full advantage of the Super Bowl Sunday excuse to eat junk food, including lots of chips and dip and a bit too much ice cream.  But the best thing I ate yesterday, by far, was this braised short rib sandwich.

I’m not a football fan.  I try and I try, but I have a really hard time following the game.  I grew up watching baseball, and while some people think baseball is slow and boring, I like the pace and I like the tradition.  Growing up, we drove to San Francisco and Oakland often to catch the Giants and the A’s.  I loved everything about those games and I understand that football has the same hold on lots of Americans as baseball had on my sister and I when we were kids.

Yes, Super Bowl Sunday has become a little too much about the commercials and halftime show, but there is still a thrill when watching the big game, even if it’s just on television, and even if I can’t follow everything that’s happening.  I didn’t watch most of yesterday’s game because I was in the kitchen, but I did see the last quarter, which turned out to be exciting and emotional even for me.  There’s something powerful about big games and the relationship between the fans and teams, regardless of the sport.  I don’t follow soccer, but that didn’t make it any less exciting to be on the streets of Rome at the moment Italy won the World Cup.  So no, I’m not a football fan, but I do like the tradition of Super Bowl Sunday and I will continue year after year to use it as an excuse to celebrate and eat.

It wasn’t until Sunday morning that I figured out what to make for game day.  I remembered that I had some short ribs in the freezer and that reminded me of a short rib sandwich my friend Amanda and I used to enjoy at one of our favorite restaurants in San Diego.  Sandwiches make great eating-on-the-couch-and-watching-football food, so I decided I would braise the short ribs in wine then use the meat for sandwiches with caramelized onions and cheese.  The short ribs take a while to braise, so I had plenty of time to make fresh bread and a caramelized onion marmalade.  If you’re thinking that sounds like a lot of work for a sandwich, you’re probably right, but the game wasn’t starting until 3:30 and I really enjoy playing in the kitchen on a lazy Sunday.  Also, the sandwiches were totally worth it! 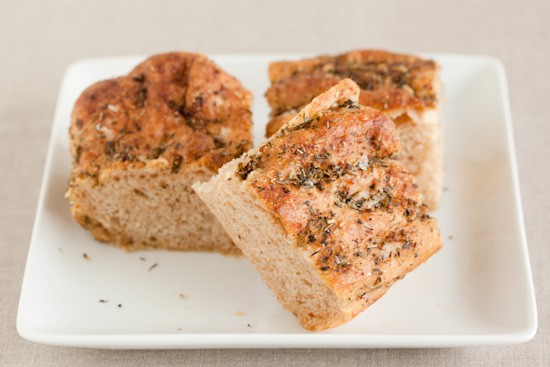 While the short ribs were braising in red wine, I mixed up the dough for Peter Reinhart’s Herbed Focaccia from The Bread Baker’s Apprentice.  I love that recipe, but normally you let the dough dough rest in the refrigerator overnight to develop the flavor.  I wanted bread in a few hours, so I skipped that step.  I substituted half fresh ground whole wheat flour to give the bread a bit more flavor since I wasn’t going to let it rest in the refrigerator overnight.  I also cut the recipe in half and baked it in a smallish rectangular casserole dish instead of a sheet pan.  It turned out great. 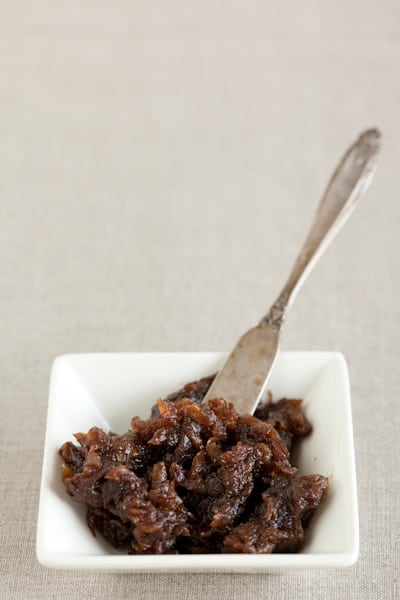 Next, I made Onion Marmalade using my favorite recipe from Kevin at Closet Cooking.  I left out the fresh thyme since the focaccia was already flavored with herbs.  I also added a bit more balsamic vinegar.  If you’ve never tasted onion marmalade, I highly recommend you give it a try.  It’s fantastic on sandwiches and burgers. 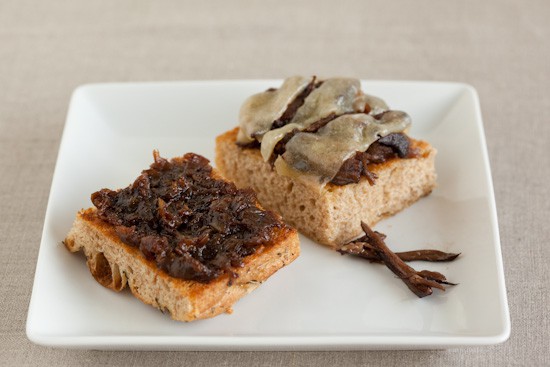 Once all the components were ready, I assembled the sandwiches.  First, I sliced open the focaccia and toasted it with a bit of olive oil.  Then I stacked one side with tender short rib meat and topped it with cheese (we tried both aged cheddar and a delicious local raw sheep’s milk cheese from Chateau Fresno Organics).  The other side was spread with onion marmalade.  That was it! 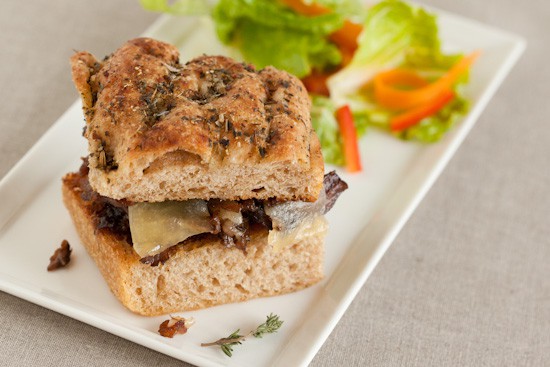 Phillip said it was the best sandwich he’s ever tasted and it was up near the top of my list as well.  It was definitely the highlight of our Super Bowl Sunday and since there were leftovers, I’m pretty sure it will be today’s highlight as well.  Here are links to all the recipes I used for the different sandwich components: