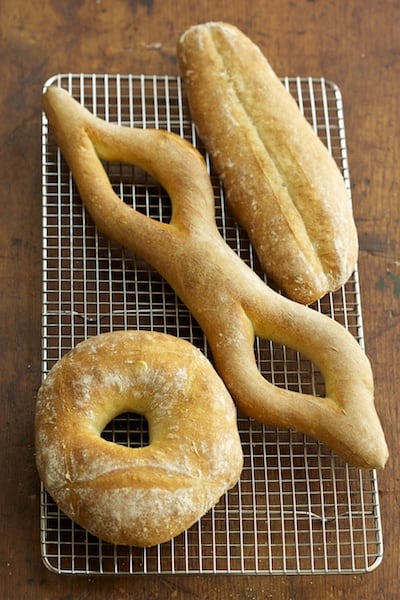 With this bread complete, I’ve officially passed the halfway mark in The Bread Baker’s Apprentice Challenge.  I’ve now baked the first 22 of the 43 breads in the book and I’m fairly confident that I will make it through the second half by the end of this year.  I really can’t believe it’s been over a year since we first started the challenge. It’s taken me longer than I had anticipated, but even if I haven’t always been able to keep up, it’s been very rewarding to see all my new baking friends plow their way through the book.  Several people have already completed the challenge, and there are new people starting from the beginning all the time.  Congratulations to Oggi for being the first person to complete all 43 breads!  You can read her last post and see her top 10 favorite breads at I Can Do That.

Although I hadn’t originally planned on photographing and writing about every single bread, I’m really glad I decided to do it this way.  I now have a list of all the breads I’ve completed so far and whenever I want to bake a bread from the book, I can go back to see photos of what I did the first time as well as read about any difficulties I might have had.  It will also be a great resource for anyone who owns the book, as the entire recipe list will eventually be linked to my blog posts (which in turn link to several other people who have made the same bread).  Wouldn’t it be great if every cookbook had such a resource?

So the bread this week is Pain de Campagne.  It’s a French bread and the dough is similar to the Baguette dough we’ve already seen, but it includes a small amount of whole grain flour.  I used whole wheat since that’s what I had on hand, but whole rye flour is another option.  The great thing about this bread is that we are given many new shaping options for the bread, so I was able to try some new techniques.

As with the regular French Bread dough, this formula starts with a batch of pâte fermentée.  The pâte fermentée, or old dough, is just a small batch of dough that is started the night before and left to ferment overnight in the refrigerator.  The old dough is then chopped up and added to the new dough ingredients the next morning, or whenever you get around to starting your bread. 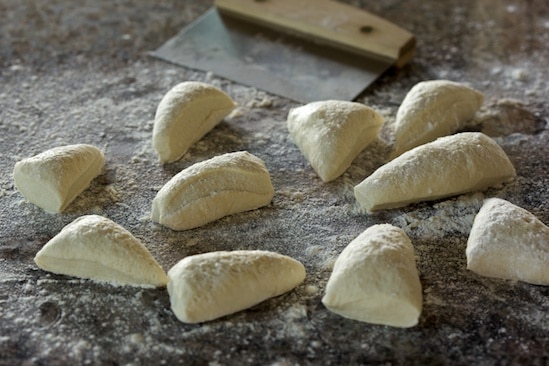 I made 16 ounces of pâte fermentée the night before I wanted to bake the bread.  I chopped it up into ten pieces and let the pieces sit at room temperature for an hour to remove the chill. 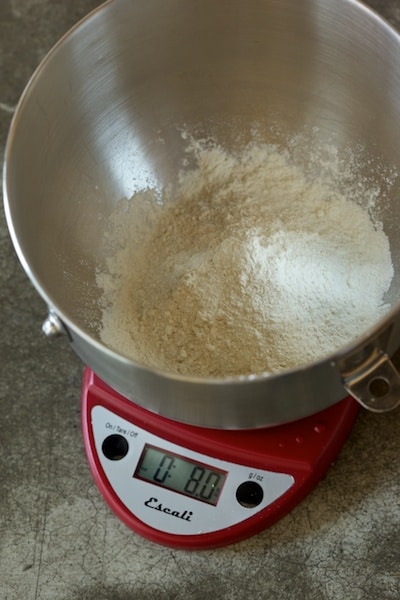 As usual, I measured the flour for the new batch of dough using a scale, rather than measuring cups.  While I still do use measuring cups for recipes that don’t include weight measurements, I turn to my scale more and more for baking bread.  It’s so much easier, faster, and more accurate to weigh your ingredients! 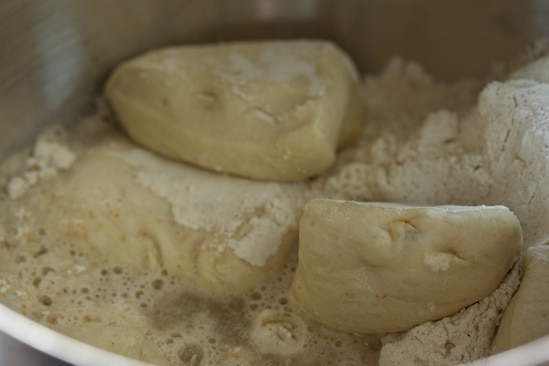 I combined the flours, yeast, salt, and warm water in the bowl of my stand mixer and added the pieces of pâte fermentée. 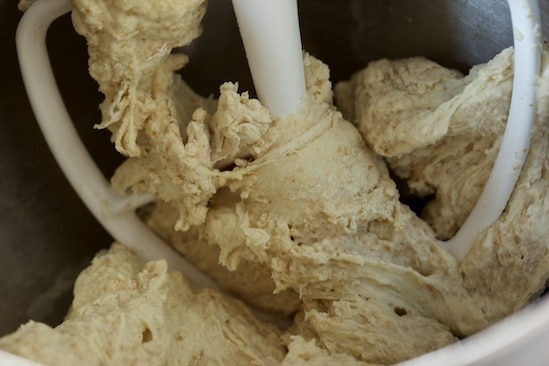 I mixed the dough using the paddle attachment until it was well combined, then switched to the dough hook and kneaded the dough for about 6 minutes on medium speed. 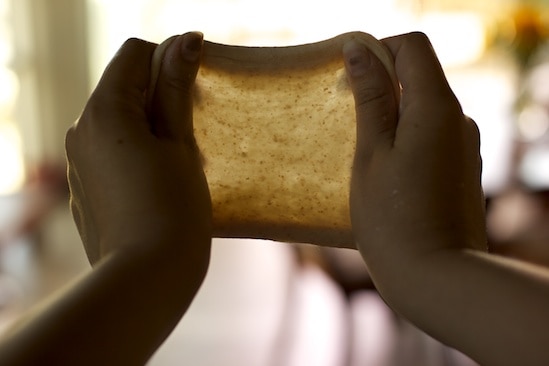 To check if the dough had been kneaded enough, I performed the windowpane test.  This dough passed with flying colors! 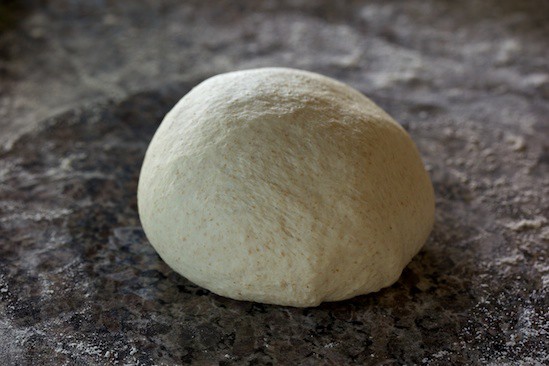 The kneaded dough was soft and pliable, tacky but not sticky.  I rounded it into a ball to prepare it for bulk fermentation – the first rising period for the dough. 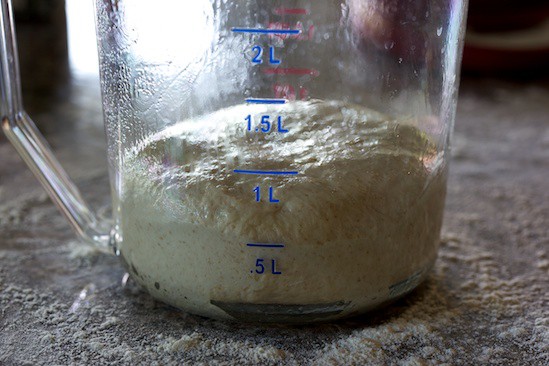 I placed the ball into my oiled container, pressed it down to flatten it, and noted the level of the dough.  The book says to let it ferment for two hours, or until it doubles in size.  It also says that if it doubles in size much faster than expected, you should degas it and let it rise again until doubled from original size.  Well, I set the timer for two hours and then went off and forgot about checking on the dough until the timer went off. 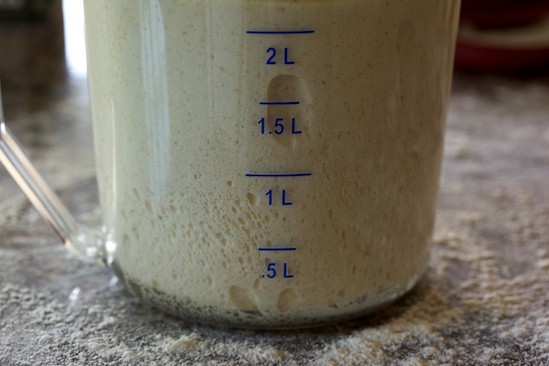 It more than doubled!  I didn’t want to punch it down and wait to let it rise again, so I just moved forward. 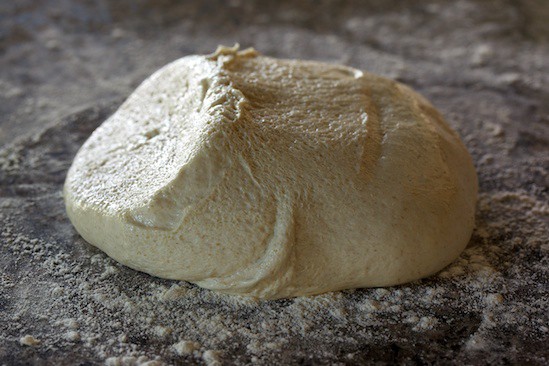 As gently as I could, I pulled the dough out of the rising container and placed it on the floured counter.  The goal is to keep as much of the trapped bubbles in the dough as possible. 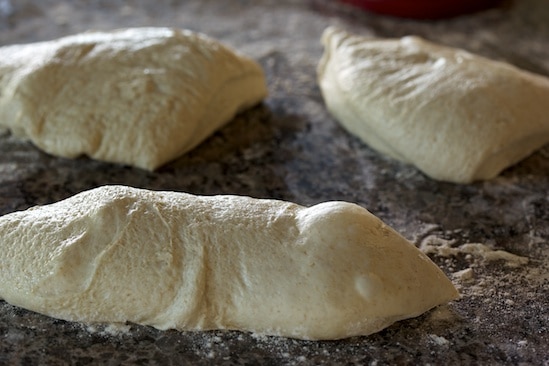 This amount of dough was enough to make three loaves, so I divided the dough into three pieces using my bench scraper. 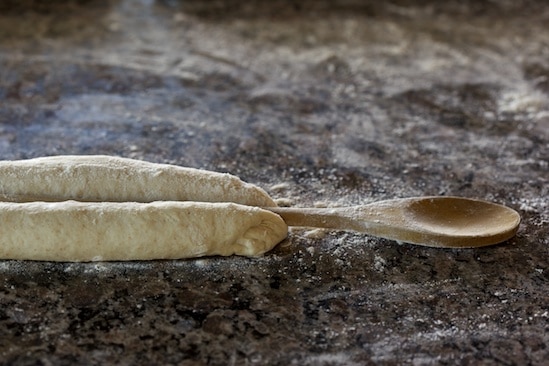 The first loaf I shaped is called a fendu, or split bread.  First I shaped a basic bâtard, which is like a short baguette.  Next I sprinkled flour over the top, and using the handle of a long wooden spoon, I made an indentation down the center of the bread that pressed almost all the way through.  More flour was then sprinkled in the indentation and I creased it again to widen the crack a bit.  Finally the loaf was turned over and allowed to proof upside down. 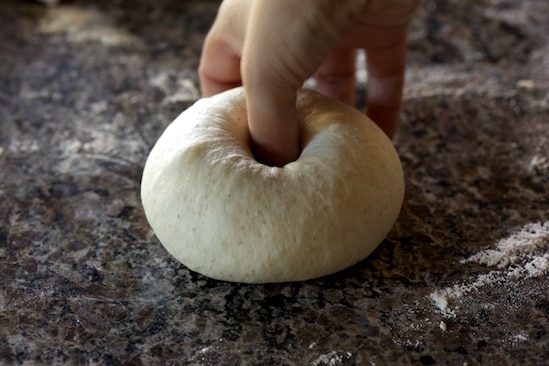 For the second loaf I decided to make a couronne, or crown.  First, I shaped a basic boule, or round loaf.  Then I poked my finger through the center, as if I were shaping a bagel. 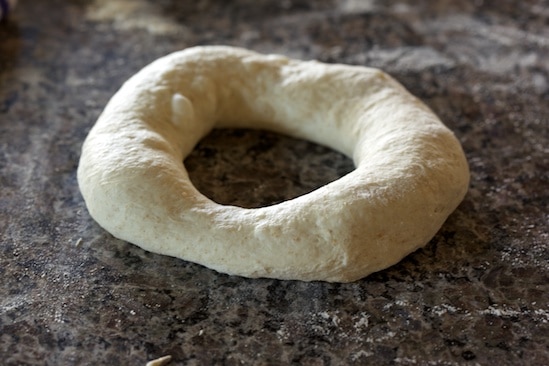 I stretched the dough gently into a circle and placed it back on the floured counter. 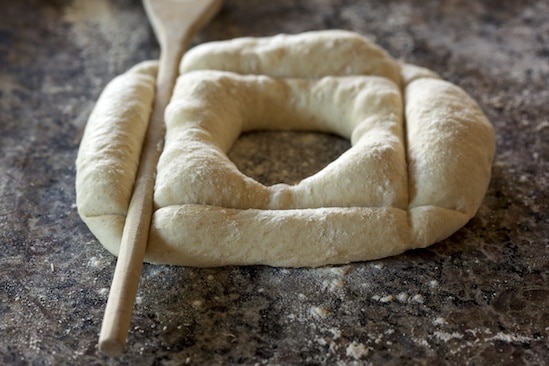 After sprinkling the dough with flour, I used the handle of the wooden spoon to make creases all around, forming a square within the circle of dough.  I then sprinkled more flour into the cracks and set it aside with the fendu loaf for proofing. 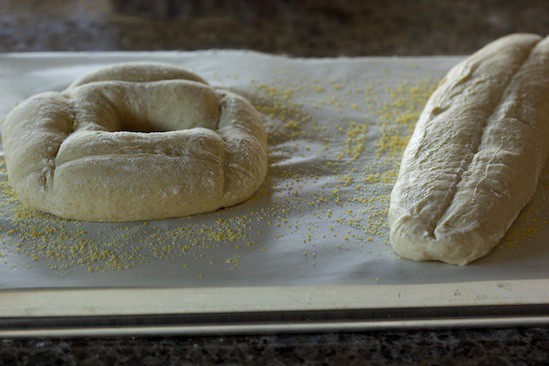 This is what the two loaves looked like right before going into the oven.  I decided to bake them on parchment because it’s easier for me to slide a piece of parchment onto a baking stone than it is to slide the individual loaves by themselves. 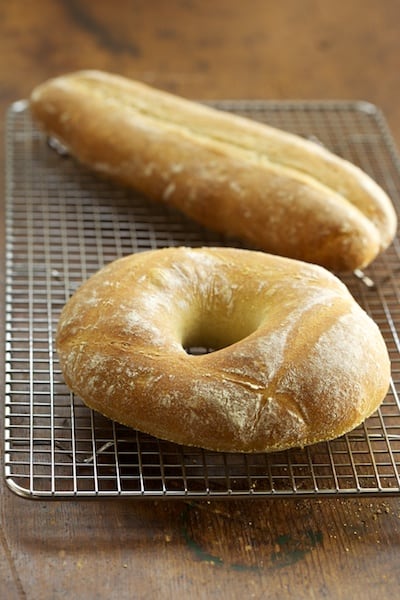 The loaves turned out beautifully, but the indentations in the couronne didn’t really stay indented so it turned out looking like a giant bagel. 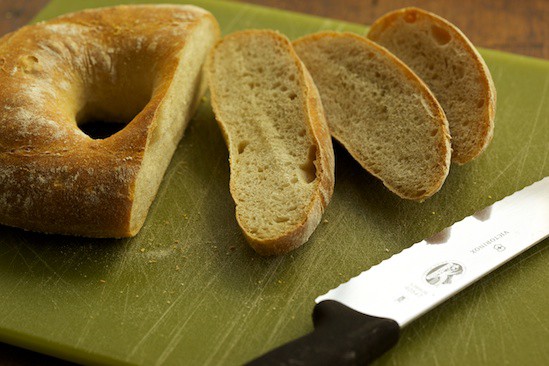 The bread had a wonderful flavor and texture, and I found the dough really easy to work with.  I definitely enjoyed this bread and will probably make it again so I can experiment with even more shapes.

If you’re following along in the challenge, the formula can be found on page 195 of The Bread Baker’s Apprentice.  The next bread I’ll be baking is Pane Siciliano and I can’t wait to see if it tastes like any of the bread I remember eating in Sicily!