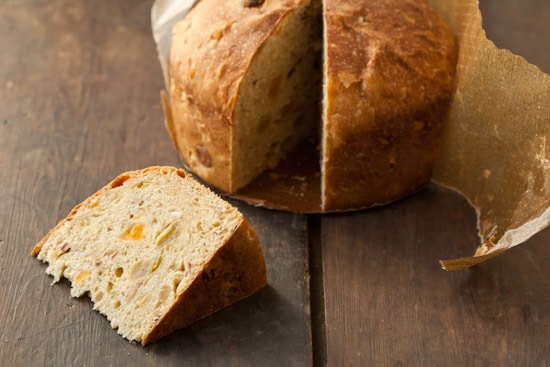 I’m sad to report that I have now had my very first failure in the Bread Baker’s Apprentice Challenge.  I’ve made mistakes and had a few problems with some of the earlier breads, but they all managed to pull through and turn out pretty great.

Then I met Panettone.

Panettone is a traditional Italian Christmas bread that originates from Milan and is popular throughout the world.  I’ve always loved it.  My first experience with panettone was when I worked for Lenscrafters in college.  Lenscrafters is owned by an Italian company and our Christmas bonuses came in the form of this sweet, rich, and fruity bread.  Not everyone liked it, so there were always extra boxes of panettone sitting around the Lenscrafters break room in December.  But I loved it.  I would toast big hunks of it (under the broiler because it was too big to fit in my toaster) and eat it dripping with butter.  It makes great french toast, too!  I also ate my share of panettone while living in Sicily.  It’s sold everywhere in Italy – little shops, big grocery stores, from the back of trucks on the side of the road.

But through all those years of eating panettone, I never once attempted making it at home.  I was excited about making this bread.  I ordered special ingredients from King Arthur Flour – the beautifully scented citrus and vanilla extract called Fiori di Sicilia, candied citrus peels, a dried fruit medley, and even the decorative paper molds for baking the traditional round loaves.

This bread uses a mix of  wild and commercial yeast and it is the first bread in the book that requires the use of a sourdough starter.  Instead of creating a new one, I refreshed the sourdough starter that I used in Sicily and have managed to keep alive through all my travels since.  I made a sponge with my sourdough starter, milk, and flour then watched it bubble and spring to life.  I soaked the dried fruits in brandy and citrus extracts and let them perfume my house overnight while the sponge rested in the refrigerator.  The next morning I mixed the silky, butter-rich dough that smelled exactly like the panettone I’ve always known and loved.  I let it sit out at room temperature to let it rise.  And then I waited.

I was prepared for the dough to take a long time to rise.  I had read about how the sugar in the dough shocks the yeast and that it wouldn’t rise like a normal bread dough.  I could have bought special yeast that is formulated to work better with sweet doughs, but I forgot to order it.  So yes, I knew it was going to take a while.  I waited.  A few hours passed and the rise in the dough was barely perceptible.  Sometime between 4 and 5 hours, I decided that I would have to move on or I would be up all night baking the bread.  So even though the dough had not come close to increasing by 50% (which is all I had been hoping for), I divided the dough between two large panettone molds.  The dough filled the molds halfway, which is what it was supposed to do.  But it needed to rise again to fill most of the mold if the loaves were to turn out the way I imagined they would.  So I prepared myself for a long night, and the waiting began again.

But the dough never rose.  I gave it a good 6 hours to do its thing in my fairly warm kitchen, and absolutely nothing happened.  Finally, I preheated the oven and baked it.  It smelled wonderful, but it didn’t rise in the oven, either. 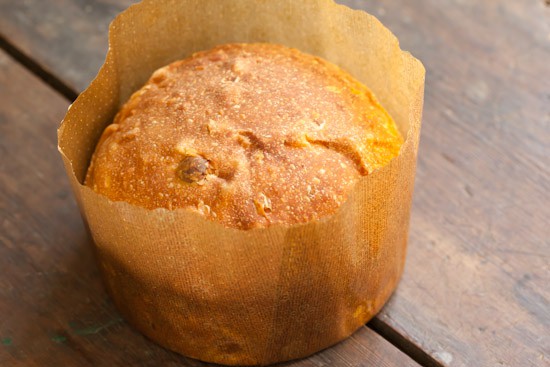 I ended up with two beautifully-scented bricks of bread.  They were heavy and dense.  The flavor was good, but without the light, airy quality, it was not panettone and it was not enjoyable to eat. 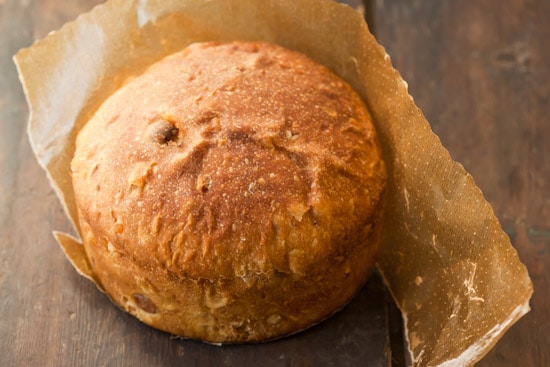 I’m not sure what went wrong.  There’s a chance that my yeast is too old.  There’s a chance that I just did something wrong during the course of making the bread.  And after reading through the experiences of others (not many people liked this bread), there’s a chance that this just isn’t a good formula for panettone.  I thought about trying it again, but I’ve decided I don’t want to risk another batch turning out the same way.  If I make panettone again, I’ll be trying the formula in Peter Reinhart’s latest book, Artisan Breads Every Day. The formula is quite a bit different and in the new book he prepares you for extremely long rising times.  If I give it a try, I’ll share the results with you.

Am I disappointed?  Of course.  But so far, 23 out 24 breads in The Bread Baker’s Apprentice have been really good and I’m quite certain that most of the ones I have yet to complete will be great as well.  I’m still very excited about the challenge of finishing the entire book.  The BBA Challenge is taking me a lot longer than I had originally planned and my life has gone through some pretty drastic changes since I first started this journey.  But even with its ups and downs and twists and turns, it’s been a fantastic adventure.  I’m thankful for all of the wonderful people who decided to join me – many of whom passed me up long ago, finished the book themselves, and continue to cheer for me as I plug along.  Thanks, guys!

If you’re following along in the challenge, the actual formula can be found on page 203 of The Bread Baker’s Apprentice.  The next bread I’ll be baking is Pizza Napoletano.  I’ve made this pizza in the past for a Daring Baker’s Challenge and it was fantastic.  I’m looking forward to giving it another try!

Panettone from other BBA Bakers:

Previous Post: « How Do You Plan to Stay in Shape this Holiday Season?
Next Post: Wordless Wednesday: His Favorite Toy »