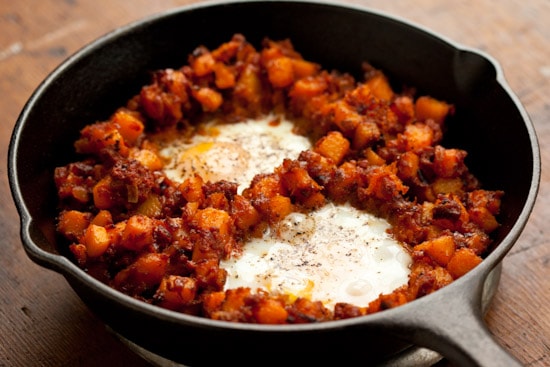 This Sunday morning breakfast experiment turned out so well that even though I don’t have an exact recipe, I felt compelled to share the ingredients and basic outline so that you can experiment and create your own recipe.

When I was a kid, Sunday seemed like the worst day of the week – my sister and I trudging to Sunday school in uncomfortable dresses and too-tight shoes, having to help my mom with housework in the afternoon, nothing on television but Westerns, and the knowledge that once the long, boring day came to an end, I would have to wake up and go back to school.

I wake up early to make sure the day lasts as long as possible, but it always starts nice and slow and usually the same way – on the couch under my favorite blanket watching CBS Sunday Morning and sipping coffee with a snoring Boston Terrier on one side and occasionally, if she’s feeling up to it, a ridiculously fluffy cat on the other.

Then comes breakfast.  I’ve always loved big weekend breakfasts, and whether I’m cooking for friends or eating alone, Sunday is my day to indulge.  So as soon as the CBS Sunday Morning nature segment ends, the TV is turned off, I break out the cast iron skillets, and begin my search for breakfast ingredients.

I had some chorizo left over from yesterday’s breakfast burritos – warmed tortillas filled with potatoes, chorizo, eggs, and cheese.  I would have happily repeated the meal this morning but realized I was out of potatoes.  Then the butternut squash caught my eye – a short, squat little squash from my Dad’s garden that has been waiting patiently for weeks on the bottom shelf of the pantry next to the more popular potatoes.

Butternut squash and chorizo?  Sure, why not?  I proceeded to make a hash very similar to my Cumin-Scented Sweet Potato Hash, swapping in butternut squash for sweet potatoes, chopping the onions instead of slicing, and leaving out the cumin (chorizo is already heavily spiced, so I kept it simple).

Since I wasn’t cooking for a crowd, I only used half of a medium butternut squash, half a large red onion, and about 4 ounces of fresh chorizo, squeezed from its casing.  After the squash and onions were soft and slightly browned, I stirred in the  chorizo and cooked, stirring occasionally, until the sausage was cooked through.  Then I made a couple of holes in the hash to hold some fresh-cracked eggs.  I stuck the whole thing in a 350-degree oven and let it bake just until the whites of the eggs were set.

It was delicious.  And after I topped it with some aged Gouda and popped it under the broiler to melt the cheese, it was even better.  I made Sourdough French Toast, too.

Since the butternut squash is pretty sweet, I might use half potatoes and half squash next time.  I’d also like to try stirring in some fresh chopped herbs at the end.  What would you do to make this recipe your own?