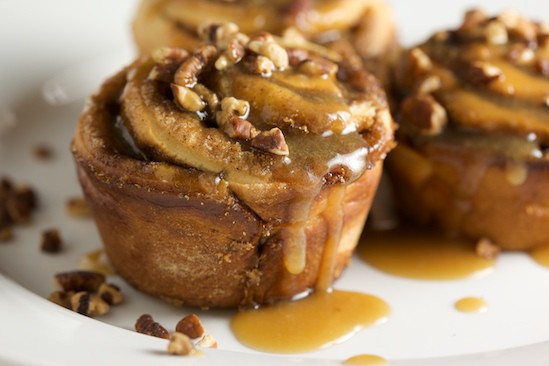 From the moment I saw these sticky buns on the cover of the latest issue of Food & Wine magazine, I knew I had to make them.  It’s fairly rare that I follow an exact recipe from a magazine—or cookbook, for that matter—but every once in a while a photo calls to me in a way that I just can’t deny.  If you’ve seen the magazine cover, you know which photo I’m talking about.  The lofty, light-as-air cinnamon bun drizzled with the perfect amount of sweet and salty butterscotch sauce is like something out of a dream—if one has a tendency to dream of baked goods, that is.

But just as most dreams quickly blur then slowly disintegrate upon waking, my hopes for butterscotch sticky bun perfection were diminished as I attempted to recreate the ethereal treat in my all-too-real kitchen.  It just didn’t work.  My sticky buns weren’t lofty or light-as-air.  They were squat and dense and the brown sugar filling had bubbled up and out of the swirls, blackening and burning on the muffin tin and oven floor.

Now,  I’m not going to place blame squarely on the recipe.  I’m aware that I made a few mistakes, although my first mistake, to be sure, was to put these sticky buns on so high a pedestal in the first place.

But there were other mistakes, too.  First, I decided to use instant yeast instead of active-dry as the recipe directs.  And as I was in a hurry, or perhaps just didn’t feel like looking up the conversion (even though one of my fellow BBA Bakers has created this handy yeast conversion chart), I just guessed on the amount of instant yeast to use, and I’m pretty sure that I guessed wrong.  Next, as I spread the brown sugar/cinnamon mixture over the rolled-out dough, it seemed like way too much sugar.  Now I’m not sure if I accidentally measured out the wrong amount, or if I packed the brown sugar too tightly into the measuring cup, or if the recipe just calls for too much brown sugar for that amount of dough.  Regardless of the reason, I could tell that there was too much sugar, but I stubbornly packed it on there and continued on as the recipe directed.

But my final mistake, and the one that I am most ashamed of, was leaving the rolls in the oven too long.  Once again, I got caught up in the details of the recipe, forgoing common sense in the desire to follow directions.  The recipe says to bake the buns until they are golden brown.  Well, after what seemed like a reasonable amount of time in the oven, I checked on the buns and they looked fairly well baked, despite the fact that the miserable things had barely risen.  The problem was that they were as pale as when I first set them in the oven.  I quickly racked my brain trying to remember if I had accidentally forgotten to add sugar to the dough, which could have been the cause of their pallor.  But, no, I was positive that I had added the sugar.  So I left them in the oven for a few minutes longer, determined that, even if they had refused to rise, they were at least going to take on a beautiful golden hue.  And they did.

So out of the smoky, burnt-sugar-crusted oven emerged a blackened, burnt-sugar-crusted muffin tin full of squat, dense, dry—but beautifully browned—cinnamon buns.  Wonderful.  In my disappointment, I stubbornly refused to even make the butterscotch sauce, the one thing that had really attracted me to the recipe in the first place.  In fact, I didn’t even take the darn things out of the muffin tin.  I just walked away.

Eventually, my curiosity and love of butterscotch overcame my frustration with the buns, and I did make the sauce.  And oh, what a sauce it was!  I decided that if anything was going to save those hockey pucks trying to pass as sticky buns, this sauce was going to be it.  So I pried them out of the tin with a knife—at this point they were fairly well glued in by the burnt brown sugar—and arranged them on a plate.  They really didn’t look so bad once they had been released.  Worse things had come from my oven, that’s for sure. 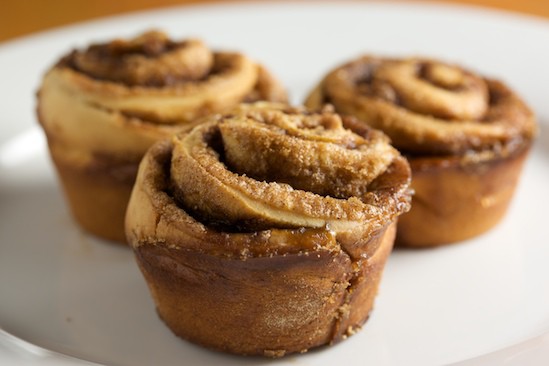 Next, I gingerly drizzled a bit of the sauce over one of the rolls, instantly transforming it into something that looked quite edible, if not exactly beautiful. 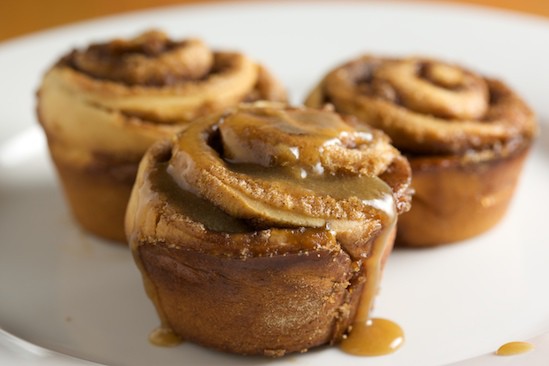 But a bit more sauce and some chopped pecans boosted my confidence in the buns even more, and I decided I might actually be able to share them with someone whose expectations hadn’t been extravagantly raised by the photo on the cover of Food & Wine magazine. 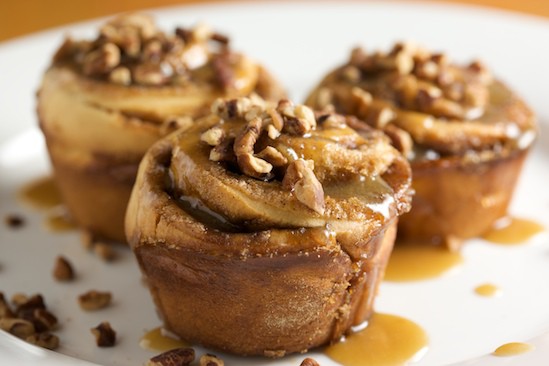 I ended up taking a tray of the butterscotch sticky buns to my sister, who, I was later told by my brother-in-law, managed to polish off every single bun herself.  They must not have been that bad!

But whether it was my own fault or not, I stand by my initial disappointment in the buns themselves.  I will definitely be making the sauce again, and recommend that you do the same.  However, next time I will be drizzling the butterscotch sauce over Peter Reinhart’s Cinnamon Buns from The Bread Baker’s Apprentice.  If you remember, I wasn’t a big fan of the white glaze when I made those cinnamon buns for The Bread Baker’s Apprentice Challenge, but I think the butterscotch sauce and pecans are just the thing to turn those buns into perfection.  But if you already have a favorite cinnamon roll recipe, you should try dressing them up with some butterscotch sauce.  You won’t be disappointed!  Visit Food & Wine magazine for the Butterscotch Sticky Buns recipe.

So, did any of the rest of you try the same recipe?  How did it turn out for you?  Will you be making them again?