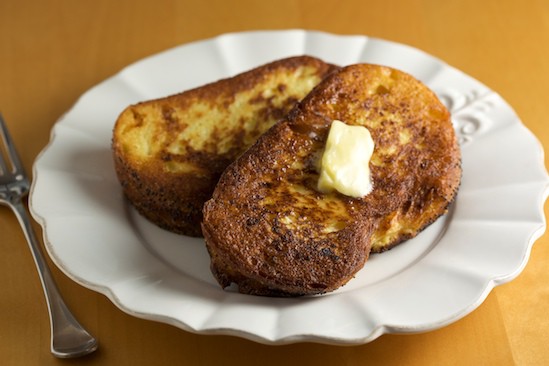 When my friends heard that I would be making Challah for the Bread Baker’s Apprentice Challenge, everyone told me the same thing:  challah makes the BEST french toast.  And since french toast is one of my favorite things to eat for breakfast, of course I had to give it a try.

As promised, I took half of the homemade challah to my sister and brother-in-law yesterday (which resulted in me staying at their house for a rousing game of Monopoly).  But I saved part of the loaf for myself, allowing it to stale slightly overnight so that it would be in perfect condition to play the leading role in my favorite breakfast.

I have already shared my standard French Toast recipe with you, including step-by-step photos, so I’m not going to go through the whole thing again.  But I did make a few changes this time that might interest you. Namely, I fried the french toast in oil.

Lately I’ve been reading Molly Wizenberg’s book, A Homemade Life: Stories and Recipes from My Kitchen Table.  Just like her blog, Orangette, Molly’s book is beautiful and filled with recipes that I can’t wait to try.  One of the recipes is for her father’s French Toast, which is similar to mine in all ways except for the frying method.  I’ve always been a butter girl, but was intrigued by Molly’s father’s reasoning that frying the french toast in hot oil seals and crisps the outside of the bread while the inside turns into a soft custard.

Of course I had to give it a try.

I coated the bottom of my cast iron skilled with canola oil and mixed up the eggs and milk while the oil heated.  I combined 2 eggs, 1/2 cup milk, a splash of vanilla, a pinch of sugar and a pinch of salt and whisked it together well.  I dipped the thick-sliced challah into the egg mixture, allowing it to soak up a bit of liquid on each side, but not soaking the bread completely (I prefer my French toast on the slightly dry side).  Then I transferred the dripping slices to the hot oil.  I cooked them for a minute or two on each side, until they were golden brown and crisp all over, then transferred them to a paper towel-lined plate to soak up any extra oil.

These french toast slices were beautiful! The oil crisps up the bread much better than butter and I loved the texture of the interior, which was soft and creamy where the bread had been soaked in egg batter and a bit chewy in the very center where the bread stayed mostly dry.  If you prefer a creamier french toast, you can soak the bread completely, it’s all a matter of taste.  I still think I prefer the overall flavor of french toast that’s been cooked on a buttered skillet, but the texture of this one was certainly better!  And once I added a bit of butter and maple syrup on the top, I was completely happy with this french toast.

And the challah?  It really might be the perfect french toast bread!

You can read about Molly’s father’s french toast on her blog, Orangette, or in her wonderful book, A Homemade Life: Stories and Recipes from My Kitchen Table. You can also find Molly at Bon Appetit, where she writes a monthly column, and on twitter.