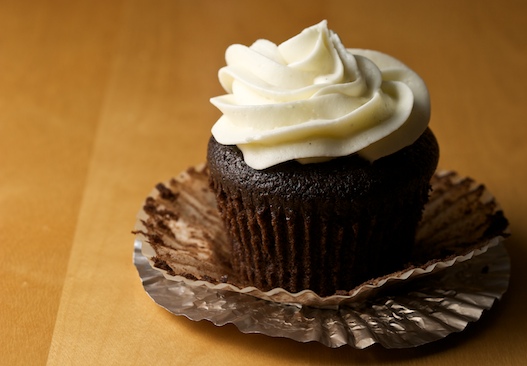 My goodness, my Guinness! These are some awesome cupcakes.

I’ve been wanting to make some type of Guinness Chocolate Cake ever since I first saw these beer cupcakes at Big City, Little Kitchen.  Gena based her cupcakes on a recipe for Guinness Chocolate Cake from Nigella Lawson’s book Feast: Food to Celebrate Life. I don’t have the book so I haven’t seen the original recipe, but I’ve had Gena’s cupcake version bookmarked for a year now.

Although I like the idea of baking cakes and cupcakes, I just don’t do it very often.  And I feel like I’m not very good at it, so I tend to avoid it when I can.  But when my friend Caron invited me over to watch the election returns with a small group of friends, I decided it was time to bake some Guinness cupcakes!

I ended up reading through several different Chocolate Guinness Cake/Cupcake recipes and they were all very similar.  I finally settled on a version by Dave Lieberman that I found on CHOW.  I made the cupcakes yesterday afternoon following the recipe closely with the exception that I substituted melted butter for the oil.

They were good.  But I was a tiny bit disappointed.  Don’t get me wrong, they really weren’t bad, but I just felt that the flavor could be better.  Plus, I had made a mess filling the cups and the resulting cupcakes were all different sizes and shapes.  I certainly didn’t want to take them to the party looking like that.  I mean, there were going to be three other foodbloggers at this gathering!

So I made another batch.  And this time, I did what I always do.  I fiddled with ingredients and amounts and ended up making my own, slightly altered, version of Chocolate Guinness Cupcakes.

I liked the second batch much better.  They had a better flavor, they were perfectly moist, and I scaled the recipe down to make exactly twelve cupcakes.  With the Lieberman recipe, I ended up with 20.  A weird number, I thought.  I prefer a cupcake recipe that makes a nice even dozen.  I mean, if you want more, just double the recipe!

I frosted the cakes with a vanilla bean cream cheese frosting.  Cream cheese, because that’s my favorite frosting in the world.  And vanilla bean because I like to see the little specks of vanilla seeds!  The vanilla bean is entirely optional, the frosting is just fine without the extra ‘fancy.’  Besides, I could hardly see any of the seeds once I got through dressing them up for the election party! 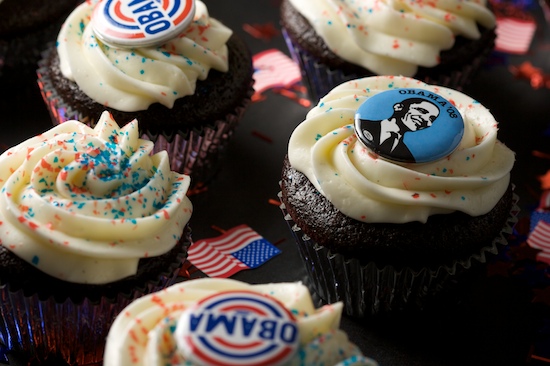 These cupcakes are so good, you shouldn’t even wait for a special occasion to make them.  I can’t believe I waited a whole year before making them!  Don’t make the same mistake.  The Guinness adds a nice complexity to the chocolate but it doesn’t taste like beer at all. There is no hint of bitterness in these cakes.  I can’t really explain it, but take my word for it, there’s something special about them.

And although I did just enjoy an unfrosted cupcake for breakfast, I highly recommend adding some cream cheese frosting!

Now, I’ve always wondered how to make that cute little swirly frosting design that I see at bakeries and on cupcake blogs. It always seemed like some big secret that only ‘real’ cupcake bakers knew.  Well, guess what, it’s no big secret and it’s not hard to do at all.  Thanks to a cupcake decorating kit I picked up at Michaels the other day, I now make cute cupcakes, too!

And although the cupcake kit is pretty great, all you need to frost cupcakes like these is this tiny, inexpensive little decorating tip and a cheap disposable piping bag (or parchment paper or even a plastic bag). You can probably pick up the decorating tip at your local craft store.

This cupcake was done on my very first try, so it really is easy to do.  Trust me, this stuff does not come naturally to me! 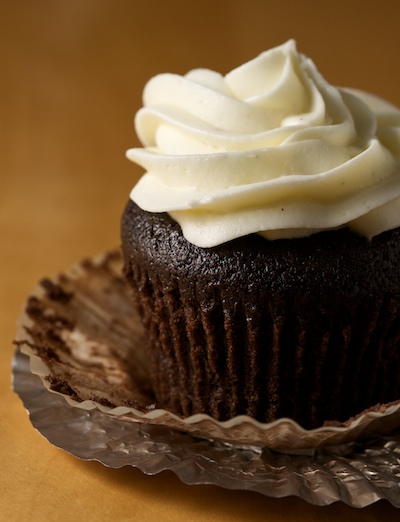 Well, now that I’ve convinced you that Guinness Chocolate Cake is the best thing ever and I’ve even shared the secret of making those cute little frosting swirls, I guess I’d better share my version of the recipe with you!  I really hope you enjoy it.  And in case you want to check out other versions of Chocolate Guinness Cupcakes, I’ll share some links with you at the bottom of the page.

By the way, you don’t have to use Guinness for these cupcakes.  Use your favorite stout or porter, if you have a preference.  I had actually planned on using an Oregon beer called Black Butte Porter, but I didn’t have any of those at room temperature.  So, I did end up using Guinness.  But next time, I’m going to try something else, just for fun!

adapted from this version by Dave Lieberman

1. Preheat oven to 350 degrees.
2. Line a 12-cup cupcake pan with cupcake papers; spray the whole thing, cupcake papers and all, with nonstick spray. Set aside.
3. Melt butter in microwave or on stovetop, then set aside.
3. In a large bowl, preferably with a pouring spout, whisk together eggs and yogurt. Add beer and vanilla whisk until well combined.
4. Sift all the dry ingredients together (cocoa powder, sugar, flour, baking soda, and cinnamon) into a separate bowl.
5. Add about a third of the flour mixture into the wet ingredients and using a hand mixer, blend well. Add the rest of the flour mixture, a third at a time, mixing well after each addition. When all ingredients are blended, add the melted butter then continue mixing until very well combined.
6. Pour batter into the twelve cups, filling each only about 3/4 full.
7. Bake on center rack of the preheated 350 degree oven and for approximately 25 minutes.
8. When cupcakes are done (toothpick inserted in center of a cupcake will come out clean), remove the pan to a wire rack.  Let cool for ten minutes then remove cupcakes from pan and let them cool completely on wire rack.

recipe notes: Sour cream can be substituted for yogurt, if that’s what you have on hand.  I used dutch processed cocoa because that’s what I had in the house. I think that regular unsweetened cocoa would work fine, I just haven’t tried it yet. Using a mixing bowl with a pouring spout is very helpful when filling the cupcake cups! I first tried using a ladle and ended up dripping batter all over the place!

In a medium bowl, blend together cream cheese, butter, vanilla and vanilla bean seeds. Gradually add powdered sugar, mixing well until it’s all incorporated.  Use immediately.  The frosting will harden in the fridge, so plan on bring it back to room temperature if you must refrigerate it before frosting the cupcakes.

recipe notes: This will frost about 18 cupcakes, but you could stretch it to 24 depending on how much you use. The vanilla bean seeds are completely optional!  If you choose to leave them out, increase the vanilla extract to one teaspoon if you want a more pronounced vanilla flavor.  If you want to frost the cupcakes the way I did, use a pastry bag fitted with a size 1M decorating tip. That particular tip, as well as disposable pastry bags and instructions came in the Wilton Cupcake Decorating Set I picked up at Michaels the other day.  It was my first time trying to make designer looking cupcakes and it was very easy! 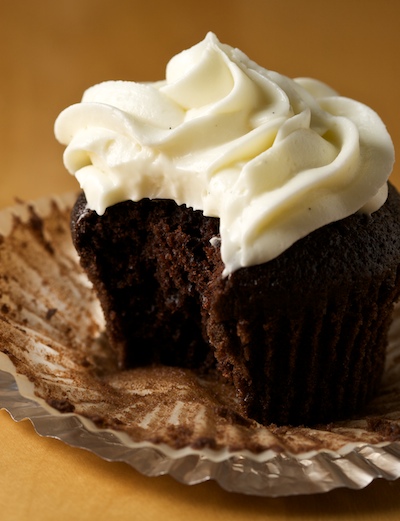 For those of you just tuning in this month, I’m happy to say that I’m participating in the National Blog Posting Month challenge. For this year’s edition of NaBloPoMo, I’ve pledged to post a new recipe every single day for the month of November. If you don’t want to miss a recipe, sign up to receive my recipes by e-mail. You’ll only receive an e-mail when I write a new blog post, and your e-mail address will not be used for any other purpose. Interested? Sign up now!