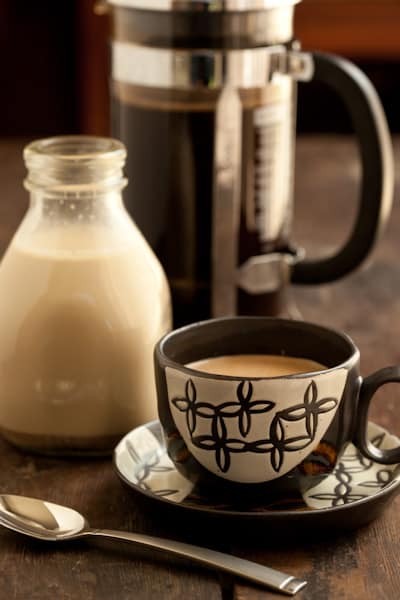 I’m taking a break from writing about sourdough today to talk about something that’s equally important in life.  Coffee.  I know that many of you love it as much as I do.  And in addition to coffee, I bet lots of you are addicted to those flavored creamers.  I’m not judging – I used to be a fan of the hazelnut variety myself.  But those colorful plastic bottles that promise to turn your cup of coffee into a candy bar are trouble – especially if you’re one of the 2000+ participating in October Unprocessed this month.  Have you looked at the list of ingredients?  Notice how “cream” is not one of them?  If you haven’t bothered to look for yourself, here’s what you can expect to find:

Gross.  Seriously, don’t put that in your body anymore.  Instead, head over to Deliciously Organic and learn how to make flavored coffee creamers that contain real ingredients.

I decided to celebrate the kickoff of October Unprocessed by making myself a batch of Carrie’s Cinnamon Streusel Creamer.  Except instead of cinnamon, I used pumpkin pie spice.  It started out as an accident when I grabbed the wrong bottle out of the pantry, but it seemed like a good idea so I went with it.  Wow.  I had to stop myself from pouring a glass of it and drinking it straight.  I wasn’t sure how I would like the maple syrup as a sweetener in my coffee, but it works.  I mean it really works.

So, here I am drinking an afternoon cup of coffee that’s creamy and spicy and lightly sweetened.  I really shouldn’t be drinking coffee, but I’m doing it anyway.  I kicked the habit for a few months, but my trip up to Oregon kind of messed that up.  I could make a million excuses and tell you that I plan to cut it out of my life again, but instead I’m just going to enjoy this cup and hopefully slowly cut back until it becomes an occasional pleasure instead of an everyday indulgence.

When I decided to take control of my health and make dietary changes in order to get a handle on my reactive hypoglycemia, I wasn’t sure which would be the hardest thing to give up.  Sugar?  Bread?  Alcohol?  I was dreading trying to live without those things for even a few months.  But it turned out that I didn’t have much problem giving any of those up.  After a couple of weeks without sugar, I lost those cravings completely.  Giving up alcohol helped improve my sleep so much, I didn’t have any desire to cave and have a glass of wine in the evening.  Giving up bread, pasta, and other grains wasn’t too bad either.  I found myself eating way more vegetables than I ever did before and it forced me to be more creative with meals.  I was eating better than ever.

But there was one thing that I really struggled with giving up.  Coffee.  And unfortunately, caffeine was causing some major problems for me.  After cutting out all of the other things that were screwing with my blood sugar and wreaking havoc in my life, it became very apparent that caffeine was nothing but trouble for me.

I’ve always been hyper-sensitive to caffeine – a couple sips of coffee and I’m ready to take over the world!  I’ve been drinking coffee pretty much daily since my late teens, but unlike some people, I’ve never developed any kind of tolerance for it.  And that’s part of what I love so much about it.  One sip and I’m bursting with ideas and I feel like I can do anything.  The last five years of this blog were completely fueled by caffeine.  But as you all know, what goes up must come down.  When I come down from a caffeine high, it’s pretty much a crash and burn.  And it can get ugly.  So although it was rough and took longer than some of the other changes, I did completely give up coffee and all other forms of caffeine for a few months.

If you noticed that I pretty much stopped writing during the summer, it was because I found it nearly impossible to do so without drinking coffee.  Physically, I felt good.  My crazy mood swings had mostly disappeared and I was slowly feeling like I had control of my life again.  But I couldn’t seem to find the kind of inspiration that had once led me to these pages to write.  I wasn’t really creating recipes either.  Instead of constantly worrying and stressing about it, I decided to let it go and focus on my health for a while.

I spent three months reading and researching and experimenting with my diet.  I gradually shifted from an extremely low carb diet to a more traditional diet rich in whole foods.  This was always the plan and I learned a lot by eliminating so much and slowly adding certain things back in.  I didn’t mean to bring back any caffeine, but it happened.  And when I started drinking coffee again, I was able to start writing again.  Since I’ve made so many positive changes in my life, I’m not going to dwell on the fact that caffeine is back.  It does affect me negatively, but at this point I think the positives outweigh the negatives.

Lots of other things besides coffee snuck back into my diet last month.  It tends to happen when I travel.  That’s why I’m so excited to be participating in October Unprocessed this month – I think this will be the perfect way for me to reset and get back on track.  My plan is to completely avoid eating out this month (except for the weekend when I’ll be attending my cousin’s wedding in SLO) and I’m going to be sharing as many things as I can from my kitchen.  Even if you didn’t sign the October Unprocessed pledge, I hope you’ll find some inspiration here to think a little harder about the foods you choose to eat.  Awareness leads to small changes and small changes can change your life.