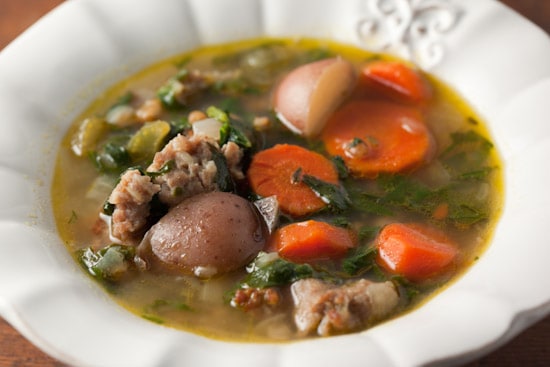 This hearty spinach and sausage soup with barley is the perfect thing to welcome the chilly nights of fall. It’s a simple soup that can easily be customized to suit your own taste, so experiment and enjoy!

I’m thrilled that Fall is here. The days here are still really warm but the nights have been cooling down nicely allowing for perfect brisk mornings that make me dream of pumpkin carving and apple pies.

But spinach? I can’t say I dream of that often. Well, spinach is the theme for this first week of Fall Fest so I pushed aside my thoughts of pumpkins and apples and decided to make a hearty spinach and sausage soup chock-full of vegetables and barley, perfect for the cooler weather that seems to be on its way.

I bought spinach and sausage specifically for the soup, but the rest of the ingredients were just things hanging around my kitchen that needed to be used up. Please just use the recipe as a jumping off point and feel free to throw in whatever you happen to have hanging around your kitchen.

I think this soup would be very good with white beans or pasta if you don’t want to use barley. To tell you the truth, I had intended to use barley but accidentally threw wheat berries in there instead (this is one of the problems with buying grains in bulk and then forgetting to label the bags).

The wheat berries were fine, though they took longer to cook than the barley would have. But I really wanted barley in the soup, so that’s what I listed on the ingredient list below. Beans, barley, pasta, rice—do whatever you want!

Even with the accidental wheat berry addition, I adored this soup. The spinach, sausage, and chunky potatoes were a great combination and I know that it will taste even better once it sits overnight. Can you guess what I’ll be eating for lunch this week? 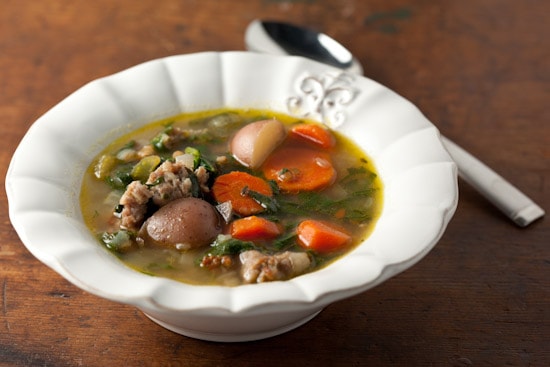 Heat olive oil in a large pot over medium heat. Add onions, carrots, and celery and cook, stirring occasionally, for 8-10 minutes or until onions are softened. Add potatoes, 5 cups of stock, and barley. Turn up heat, bring to a boil, then reduce heat and simmer uncovered for 30-45 minutes or until barley is tender. Meanwhile, squeeze sausage from its casings, crumble and brown it in a skillet. Drain fat and set the sausage aside. When barley is tender, add spinach and sausage to the soup and fresh herbs if you are using them. Add more stock if necessary or desired, bring soup back up to a simmer and let cook for another 15 minutes. Season to taste with salt and pepper.