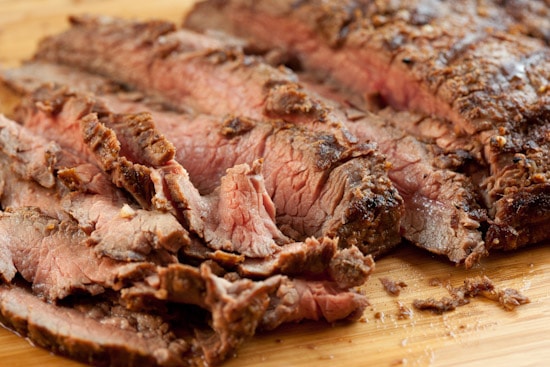 I love grilled beef.  I especially love grilled flank steak.  Today I’m introducing you to one of my favorite food bloggers, Terry from Blue Kitchen, and his recipe for Spice-Rubbed Flank Steak.  The meat is slow-marinated in a mixture of coriander, cumin, cinnamon, fresh ginger, and garlic before it meets the grill.  Yes, it smells and tastes just as fantastic as it sounds.

I’ve definitely been making an effort to eat less meat. When I do indulge, I try to buy grass-fed beef and free-range organic chicken. Now that I can buy both beef and chicken at the Farmer’s Market here in Fresno, the meat I buy is often local, too.

But it doesn’t always happen. The flank steak pictured above came from Costco. I tried to buy it at the Farmer’s Market, but neither purveyor had flank steak that day and I needed that particular cut of beef (usually I’m much more flexible).

So yes, I slip, but I’m trying. I’m at the point now where I want to pay more for beef and chicken if the animals have been raised right. I also feel good about paying more for local organic produce (although you’ll find that if you buy produce in season at a Farmer’s Market, the prices are surprisingly low). I want my money to support the people who are trying to make a difference.

Terry Boyd knows his way around a kitchen. But even better, he has the gift to inspire others to cook.  Blue Kitchen is one of those places on the internet where I always feel welcome.

I can drop by, hang out with Terry and his wife Marion for a while, listen to some jazz, and leave feeling both relaxed and inspired. The menus aren’t complicated, the ingredients aren’t complex. It’s just good food and good conversation.

This Spice-Rubbed Flank Steak is a perfect example of what the recipes are like at Blue Kitchen—simple ingredients, complex flavor, and instructions that even an inexperienced cook can follow.

Since Costco sells their flank steak in a two-pack, I’ve made this twice the past month for two different groups of people and it was met with rave reviews all around. 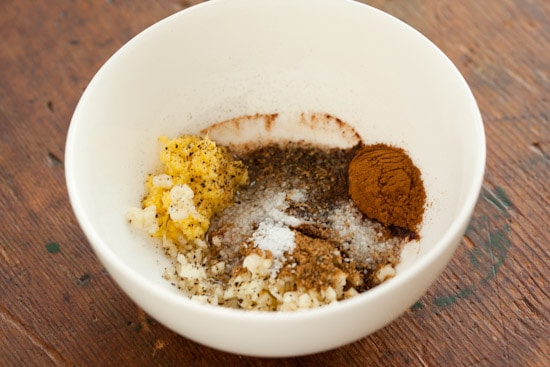 The marinade for the steak is a spice rub. Fresh garlic and ginger are mixed with ground spices and a bit of oil to make a paste.

I toasted and ground whole cumin and coriander seeds for the rub instead of using pre-ground spices.  It only takes a few minutes longer but I think it makes a big difference in flavor. 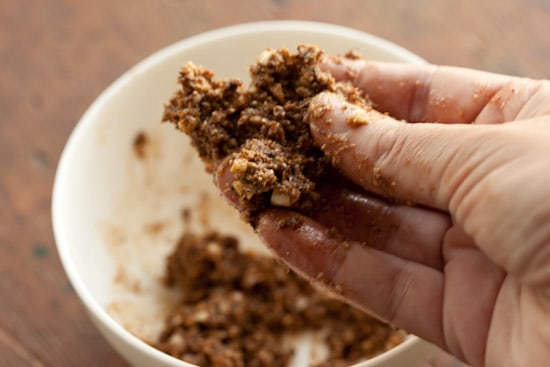 I mixed the ingredients with my fingers since I knew I’d be getting my hands dirty rubbing the steak anyway.  Plus, I love mixing things with my hands! 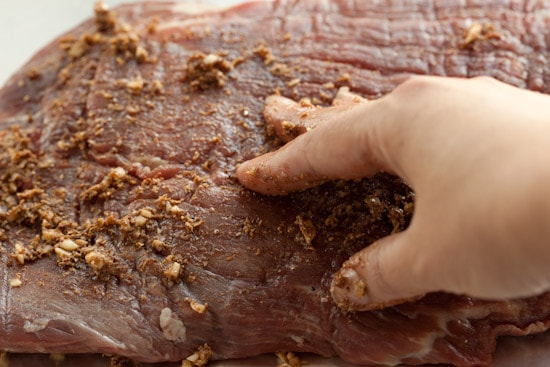 I rubbed the spice paste all over both sides of the flank steak making sure every inch of it was covered.  The steak was then placed it in a plastic bag and left to marinate in the refrigerator for about 8 hours. 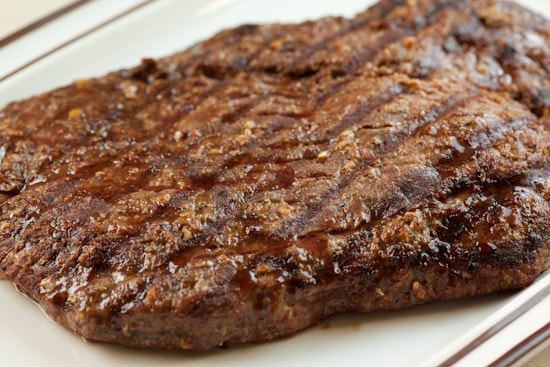 I grilled my steak over medium heat for about 5 minutes on each side and ended up with a perfectly pink medium steak.

Terry gives grilling times for a medium-rare steak in the recipe. Flank steak is really best grilled to a medium-rare to medium doneness, but even well-done flank steak will be somewhat tender if it’s sliced thinly against the grain. 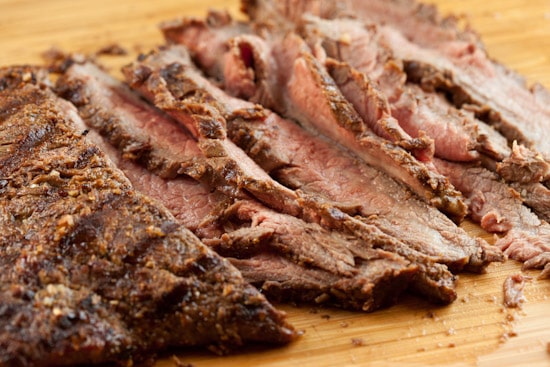 We ate the flank steak stuffed into pita with lettuce, tomatoes and garlic sauce. Rice pilaf made the perfect side dish the first time I made this and a wheat berry salad was a great accompaniment the second time.

I really hope you enjoy this flank steak and Blue Kitchen as much as I do!