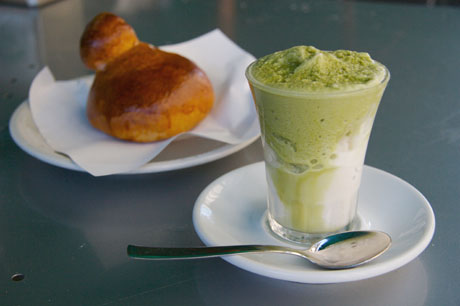 As our time here in Sicily is coming closer to an end, I find myself reflecting a lot on what I will miss most about living here. Of course I will miss the food, but I’ll be taking with me a whole new way of looking at food and cooking and will be able to continue eating in the Sicilian style wherever we end up in the world. But some things I will not be able to recreate. Some experiences cannot be reproduced in other parts of the world. One of the things I will most is sitting outside our favorite cafe on a warm summer morning, eating brioche and pistachio and/or almond granita for breakfast.

What is granita exactly? I could tell you that it is a frozen mixture of water, sugar, and a flavoring such as lemon, strawberry, mulberry, coffee, pistachio, almond, or in Catania, even chocolate. I could tell you that it’s sort of like a semi-frozen sorbet. I could send you to the wikipedia explanation, I could point you to other web sites that have tried to explain what it is that makes Sicilian granita different than anything else you will find in other parts of the world. But you just won’t understand until you sit down with that glass cup and spoon, warm, buttery brioche close at hand, and try it for yourself.

I have three favorite flavors of granita: lemon (limone), pistachio (pistacchio), and almond (mandorla). The lemon I always order by itself as its tartness doesn’t combine well with the other flavors. But the pistachio and almond are both so good that I usually have to order them together rather than try to choose between them. I’ve also been known to order a combination of pistachio and chocolate. The consistency of the granita here in Catania is hard to describe. It’s not slushy but it’s not solid. A spoonful holds together long enough to get into your mouth but then it melts instantly. It’s not icy or grainy but it’s not exactly smooth. It’s perfect. But the best part is the flavor. Because of the simple ingredients and the way that it’s made, the flavors are pure and intense, not watered down like typical Italian ices.

Don’t ask me how they make it. I’ve read the explanations, I understand that it is made from the simplest of ingredients and stirred and frozen to just the right consistency, but there has to be some magic involved. I just don’t understand how water, sugar, and pistachios can turn into something that tastes so creamy but at the same time is so light and refreshing. It has to be magic, there’s no other explanation. How else do you explain the fact that you can’t get anything like this anywhere else in the world?

So maybe you’re wondering why the granita is eaten with brioche. Here, brioche is not only eaten with granita, it’s also a standard accompaniment to gelato. Gelato is Italy’s version of ice cream (creamier and better than American ice cream in every way) and it is really the only other good breakfast choice during the sweltering summers here. That’s right, when they aren’t eating granita, Sicilians eat ice cream for breakfast during the summer. But, back to the brioche. The sweet bread is literally eaten together with the granita and gelato. You can dip the bread into your granita, you can scoop the granita onto a piece of the bread (my preferred method) or you can just eat them side by side. Gelato, on the other hand, is often served right inside the brioche. The bread is split and the ice cream scoop is placed inside. Mmmmmmmm. But back to the original question. Why? It’s best not to question these things. You have to try it, to understand it.

So this is just one of the many many things I will miss about Sicily when we leave here in November. You will be seeing more posts like this as I spend the next few months organizing my photos and memories, trying once and for all to capture the spirit of this island that has changed me so deeply.