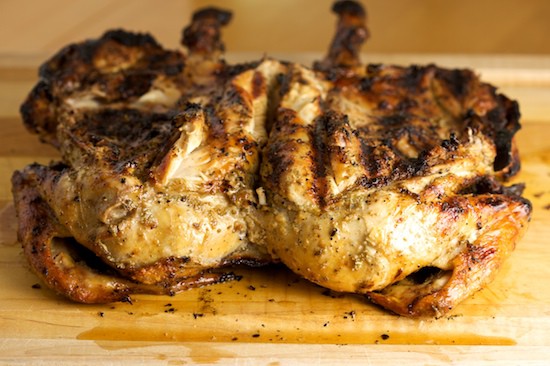 Remember I told you I had butterflied a chicken and was planning on grilling it under a brick?  Well now I’ll show you how I did it.

As I mentioned the other day, Pollo al Mattone, or Chicken Under a Brick is a Tuscan style of grilling chicken.  The chicken cooks quickly since it is flattened under the weight of the brick and you end up with crispy delicious skin and juicy, perfectly cooked meat.  What more could one want from a chicken?

My first step was to marinate the chicken with olive oil and herbs.  You can use any combination of herbs you like, I just used a simple mixture of garlic and rosemary.  First I stripped the leaves from 5 or 6 sprigs of rosemary (about 1/3 cup loosely packed) and peeled six cloves of garlic. 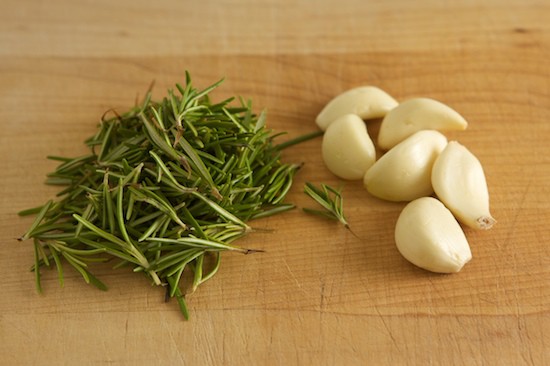 I could have finely chopped everything by hand, but the lazy person inside of me decided a mini food processor was the way to go! 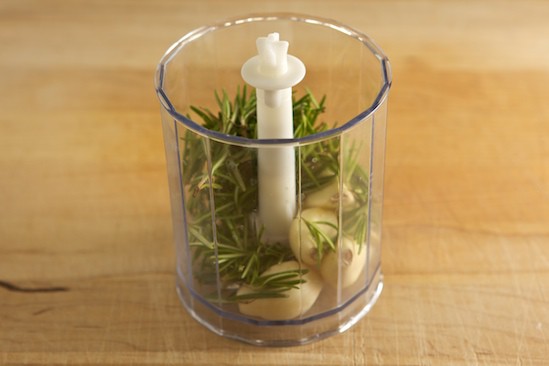 A few seconds later, I ended up with finely chopped rosemary and garlic!  If you don’t have a mini food processor, just chop everything up by hand and/or pound it with a mortar and pestle. 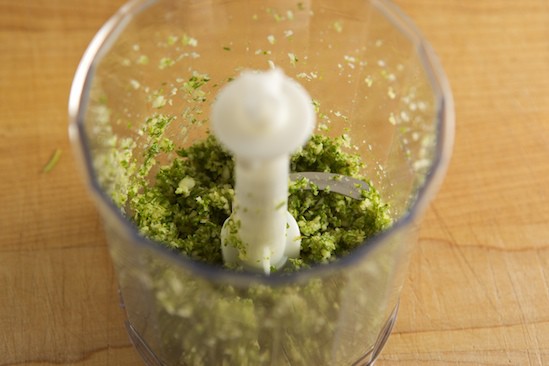 Next, I stirred in about 1/2 cup of extra virgin olive oil. 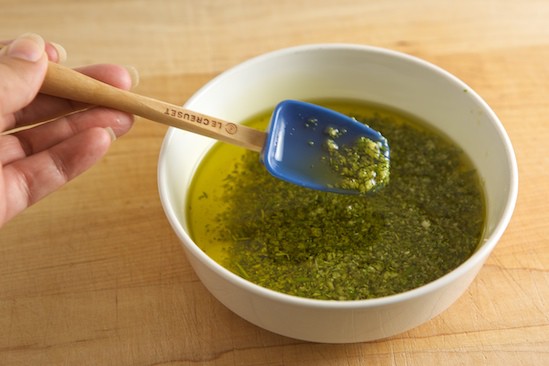 Now for the chicken!  If you’ve never butterflied a chicken, watch this video.  See how easy it is?  After cutting the chicken, I rinsed it and patted it dry with paper towels. 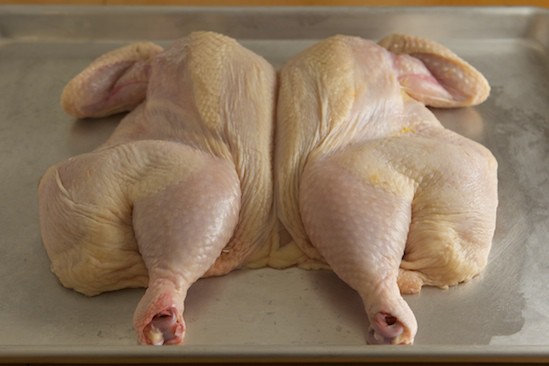 I also folded the wings under the bird so that the tips won’t burn on the grill. 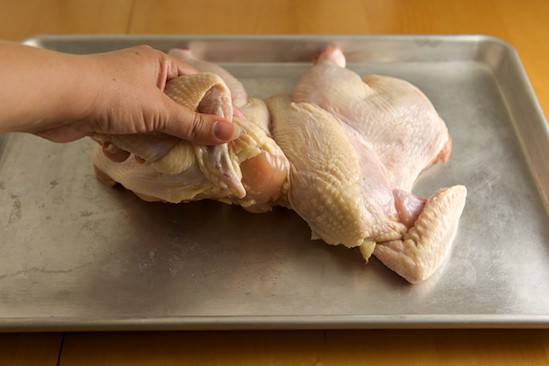 Here is the inside of my beautifully butterflied bird. Doesn’t it make you want to rub oil all over it? 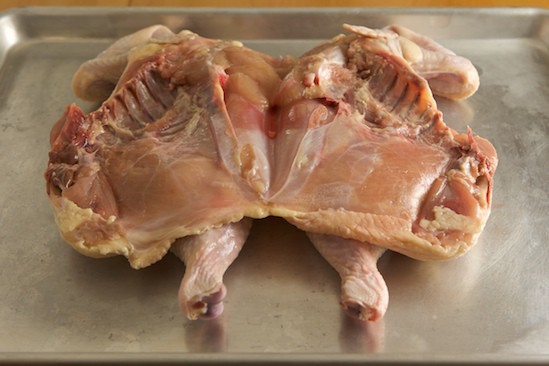 I thought so!  I poured about half of the marinade over the inside of the chicken. 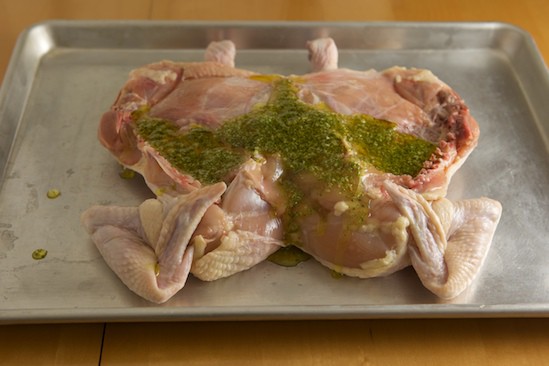 Then rubbed it all over, making sure to coat every single part of the bird. 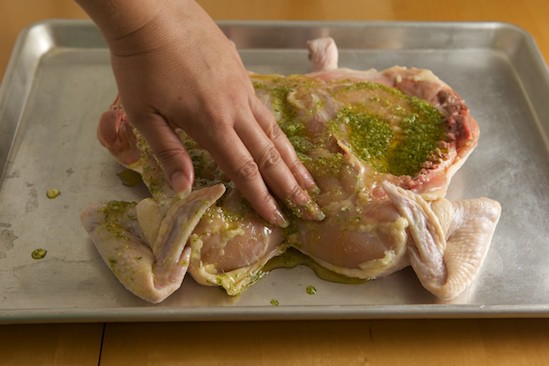 Next I flipped it over and rubbed the remaining marinade all over the outside of the chicken.  After the entire chicken is well-coated with the rosemary-garlic oil, you can cover the whole pan with plastic wrap or slip the chicken into a large plastic bag and place it in the refrigerator.  Try to let it sit for at least a few hours. 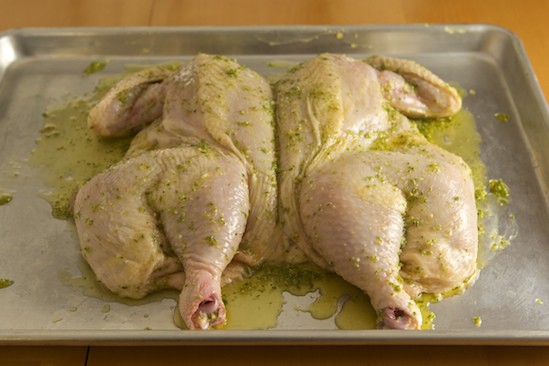 When you’re ready to grill the chicken, take it out of the fridge and rub some lemon juice all over it.  Right before it goes on the grill, sprinkle both sides liberally with kosher salt and freshly ground pepper.

Prepare your grill (gas or charcoal) for direct medium-low heat.  Allow as much marinade as possible to drip off the chicken before placing it on the grill.  Put the chicken on the grill skin side down and watch for flare-ups.  You may need to move the chicken around a bit until the flare-ups die down.  Once the flare-ups stop, put two foil-covered bricks directly on top of the chicken and allow to cook undisturbed for 15 minutes. 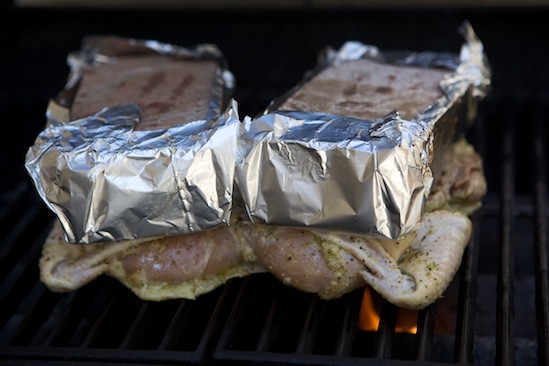 This is what my chicken looked like after 15 minutes: 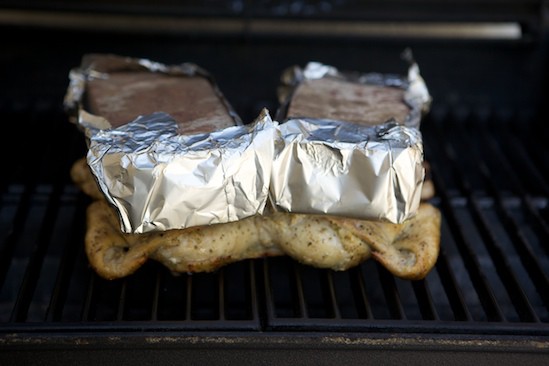 Remove the bricks from the chicken and carefully lift it up to check the skin.  The skin should be well-browned and crispy.  If so, it’s time to flip the bird! 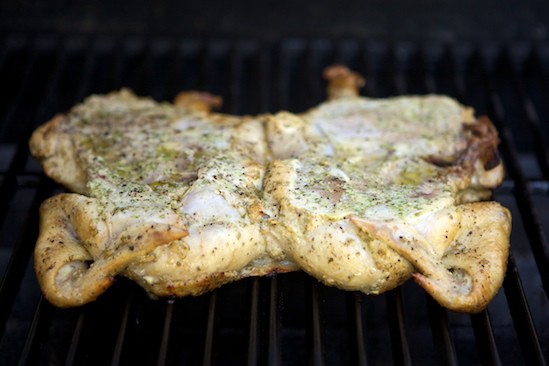 Mine was a little more than well-browned when I flipped it over!  Ooooops!  But we’ll just pretend that it’s perfectly browned like the last one I grilled (and of course didn’t photograph).

When you flip it over, you don’t need to put the bricks back on the chicken.  Just let it finish cooking until the internal temperature reaches 165 degrees…it will probably only take about 10 minutes.  As you can see, I flipped the wings back up on top to keep them from burning.  Not sure if it’s necessary, but it was easy enough to do. 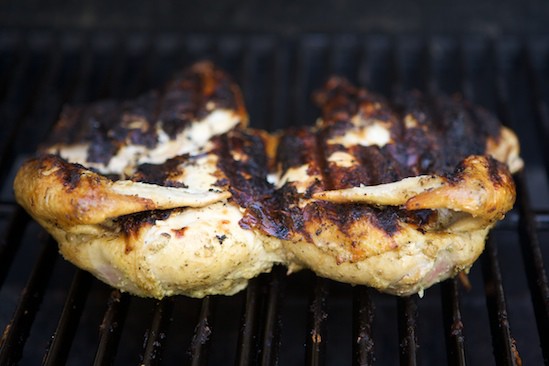 When it’s finished, let it rest for ten minutes before carving.  Then divide it up and enjoy! 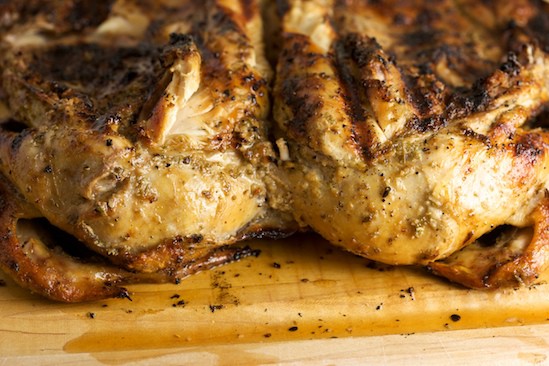 You can use any marinade or rub you want with this chicken.  You could even brine it first if you want.  And if you don’t have time to marinate it at all, that’s fine, too.  Just rub it with oil and herbs right before you grill it.  Have fun!

Previous Post: « How to Butterfly a Chicken
Next Post: Cinnamon Rolls or Cinnamon Buns? Delicious Either Way! »