This homemade cinnamon swirl bread is better than anything you can buy at the store and makes the most perfect cinnamon toast. Although I love to eat it still warm from the oven, I think it tastes just as great the next morning, toasted and slathered with butter.

I’ve been baking bread since I was small. My mom baked bread a lot when we were kids and my sister and I used to have fun helping (dressed in our matching chef’s hats and aprons, of course).

Here I am on the left (Nickle, back then) and my sister Penny is on the right.

At some point, I took things into my own hands and started baking my own bread. Cinnamon Swirl Bread, to be exact. For whatever reason, once I learned how to make that, it was the only bread I made for years.

It wasn’t until we moved overseas a few years ago that I was bitten by the bread making bug (actually, attacked is more like it). I will never stop making the cinnamon swirl bread but I’ve since branched out into all types of bread from standard whole wheat sandwich loaves to focaccia to sourdough (my latest obsession).

There is nothing in the world like the smell of bread baking in the oven and few things more satisfying than cutting into a loaf of cinnamon swirl bread and knowing that you created it with your own two hands.

I hope you’ll give it a try!

1. In large mixing bowl or the bowl of a stand mixer combine 3 1/2 cups of the flour and the yeast. In a saucepan heat milk, 1/2 cup sugar, shortening or butter, and salt just until warm (115 to 120 degrees), stirring constantly to melt shortening or butter. Add milk mixture to dry mixture in mixing bowl then add eggs. Beat at low speed with electric mixer for 1/2 minute (or in a stand mixer using the paddle attachment), scrape down sides of bowl, then beat 3 minutes at high speed. By hand, stir in enough of the remaining flour to make a moderately soft dough. (If using a stand mixer, gradually add flour until a moderately soft dough forms, then switch to the dough hook.) Turn out on lightly floured surface and knead till smooth and elastic, 5-8 minutes. (Knead with dough hook in stand mixer for 5 minutes on medium-low speed.) Shape into a ball. Place in lightly greased bowl, turning once to grease surface.

2. Cover and let rise in a warm place until double in size (1 to 2 hours). Punch dough down; turn out on a lightly floured surface. Divide in half. Cover; let rest 10 minutes. Roll each half into a 15x7-inch rectangle. Brush entire surface with water.

3. Combine the 1/2 cup sugar with the ground cinnamon. Spread each rectangle with half the sugar-cinnamon mixture. Roll dough up, beginning with narrow side. Seal long edge and ends by pinching together. Place, sealed side down, in 2 greased 9x5x3-inch loaf pans. Cover and let rise in warm place till almost double (about 45 minutes). Bake at 375 degrees until done, 35 to 40 minutes. (If crust browns too quickly, cover with foil last 15 minutes of baking.) Remove bread from pans and cool on wire racks. 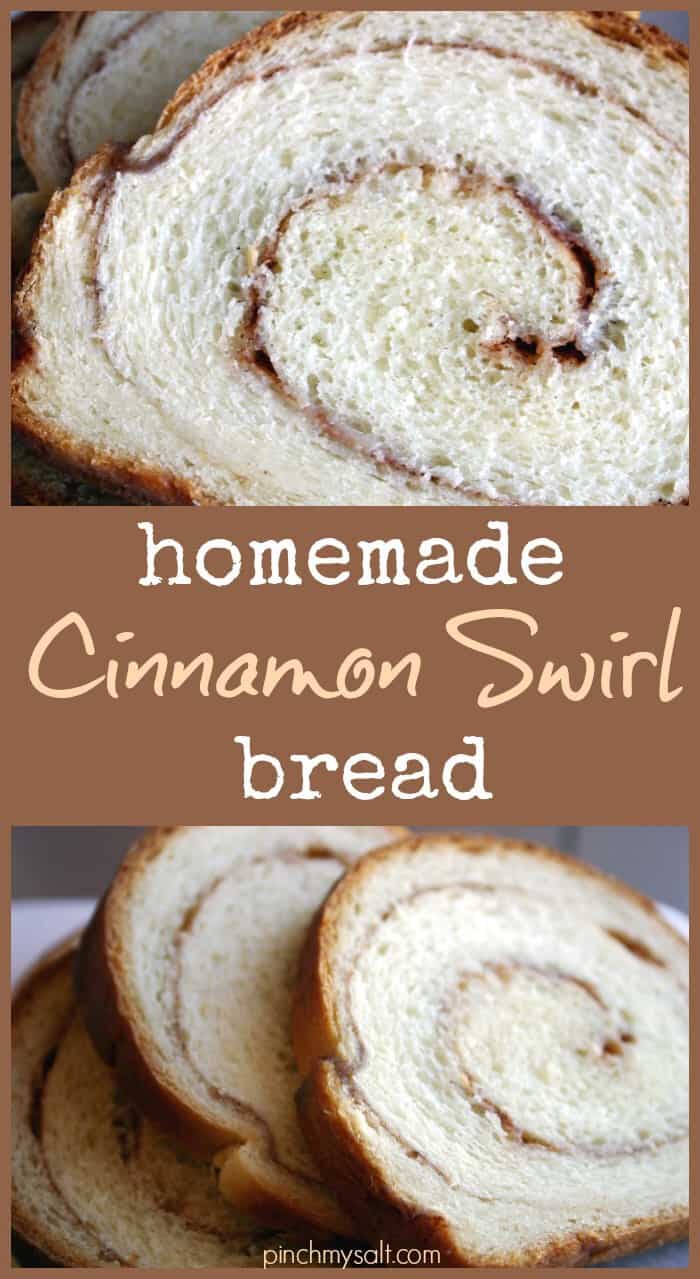