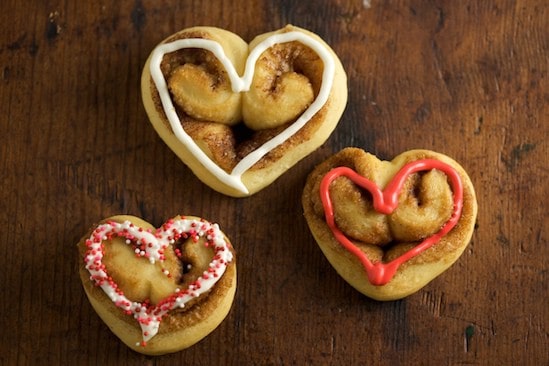 On a whim, I decided to try making heart-shaped cinnamon rolls for a fun Valentine’s Day treat.  I had no idea if it would work, but I was thrilled  with the results.  They turned out so cute, I had to share the technique with you even if it’s a bit late to make them for today’s Valentine’s breakfast.

But who says you can only eat heart-shaped food on Valentine’s Day? 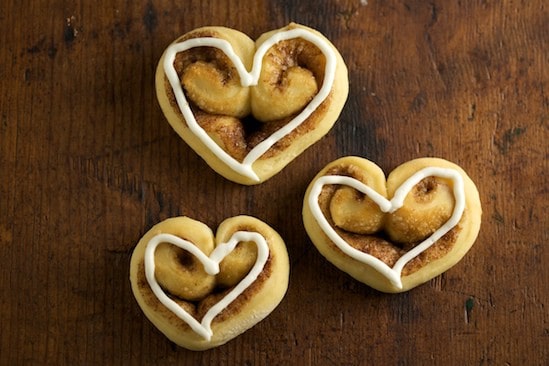 You can make heart-shaped rolls from any regular cinnamon roll recipe, but I happen to really like a dough made with buttermilk.  I improvised the dough for these rolls from the cinnamon bun recipe in The Bread Baker’s Apprentice.  Enjoy!

Cream butter and sugar using a stand mixer, or in a large mixing bowl with a hand mixer, until light and fluffy;  beat in egg.  In a separate bowl, whisk together flour, salt, and yeast.  Add buttermilk and flour mixture to the butter mixture and mix on low speed until all the flour is incorporated.

If using a stand  mixer, switch to the dough hook and knead on medium speed for 6 minutes, adding a bit of flour if necessary to form a very soft dough (will most likely be very sticky and that’s fine).  If kneading by hand, scrape dough onto a floured counter top or board and knead, adding only as much flour as necessary to keep dough from sticking, for 8 to 10 minutes.  Place dough in an oiled bowl and turn once to coat both sides of dough with oil.  Cover and let rise in a warm spot for about an hour and a half.

Gently push dough down to deflate and turn out onto a floured counter top or board.  Press dough out into a small rectangle then cover and let rest for ten minutes.  Meanwhile, mix together brown sugar and cinnamon in a small bowl.  After dough rests, roll it out into a 20″ x 7 ” rectangle.  Brush surface of dough with melted butter then sprinkle cinnamon sugar mixture evenly over the dough.  Gently press the sugar down into the dough with the palm of your hand. 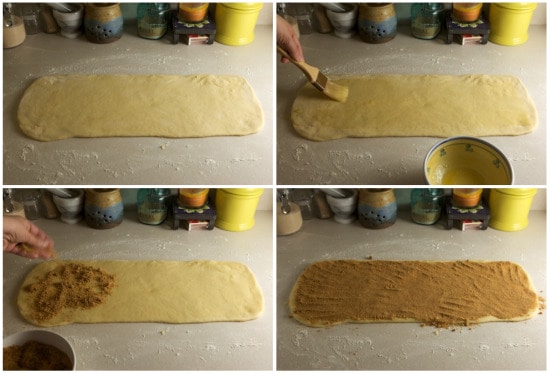 Starting on a long side, begin rolling the dough towards the center, stopping before reaching the very center.  Repeat with other side then roll the two sides together until they meet in the middle.  Gently press together. 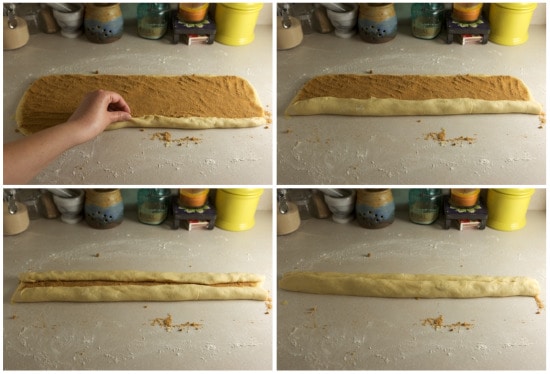 Slice the rolls into one-inch pieces then transfer to parchment or silpat-lined baking sheets.  Shape the pieces into hearts by pinching the bottom of the roll between two fingers. 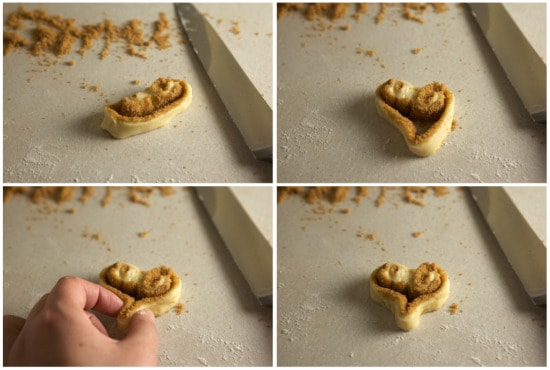 You should end up with 20 -24 cinnamon rolls, divided between two baking sheets.  Cover with greased plastic wrap and let cinnamon rolls rise for 45 minutes.  Preheat oven to 350 degrees during last 15 minutes of rising time. 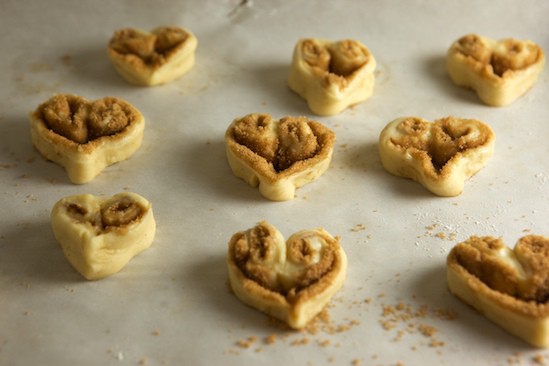 Bake cinnamon rolls at 350 degrees for a total of 15 minutes (or until lightly browned), rotating sheets from top to bottom halfway through baking time if using two oven racks. 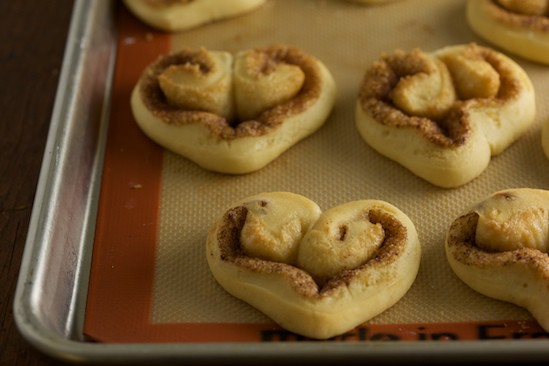 Beat together cream cheese and butter until light and fluffy.  Add vanilla then gradually beat in powdered sugar.  Spread glaze on warm cinnamon rolls and serve immediately.  You may also thin the glaze with a bit of milk to drizzle over the rolls, or decorate cooled rolls using a piping bag and round tip as shown below.