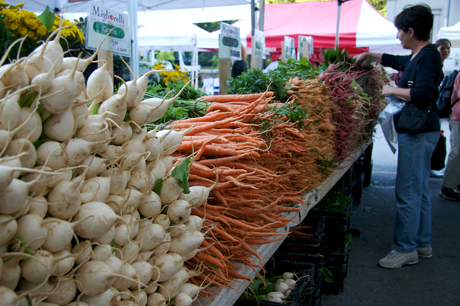 Sorry for the unannounced disappearance but I have been traveling like crazy! I’ve been New York, Baltimore, Chicago and now I’m back in New York! I was supposed to fly to San Francisco from Chicago but missed my flight (actually I missed the entire airport since I accidentally went to the wrong one!). I was going to be stuck in Chicago overnight because all the San Francisco flights were booked up so I hopped on a plane back to New York City instead! Might not make much sense to some but made perfect sense to me. I am now in New York and having a great time wandering the city alone once again! Did I mention I love this city??

The above photo was taken at the Union Square Greenmarket which I discovered on my very first day in New York. I will be writing more about the Greenmarket as well as all of the rest of my adventures (including the foodblogging class by Matt Armendariz and Blogher conference) in a series of posts starting soon. Once I get to California, I will have use of a kitchen again which means new recipes and food photos. Stay tuned!