I’m not sure how I’ve made it 34 years without ever touching fresh rhubarb.  We just didn’t eat it growing up.  I don’t think there was any particular reason for it, we just didn’t.  I know I’ve probably tasted Strawberry Rhubarb Pie at some point in my life, but I can’t really recall ever knowing what rhubarb even tastes like.

Luckily, my friend Allen suggested that I try making something with rhubarb. If he hadn’t put it in my head, I probably would gone another year without giving it a go.  And once he suggested it, I started noticing rhubarb recipes everywhere.  It seemed like I was the only in the world not eating rhubarb on a daily basis.  I was determined to give it a try.

But I wasn’t really sure where to find it.  I knew it was in season, and living in California, I generally have access to just about any fruit or vegetable imaginable.  But I really didn’t recall seeing rhubarb at the markets.  My friend Caron assured me that I would be able to find it here, since she grew up eating lots of rhubarb in Southern California.  We headed out to one of our local farmer’s markets and sure enough, there it was! 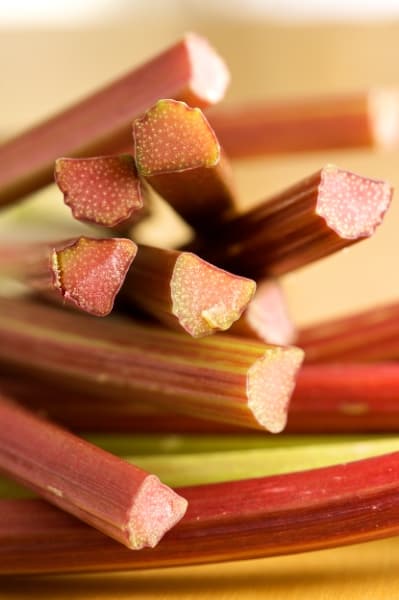 I snatched up two bunches of the scarlet, celery-like vegetable (or is it a fruit?).  Caron suggested I try using it to make a simple compote, and I thought that sounded like a good way to get to know this ingredient.  I chopped it up, tossed it with some sugar and let it macerate for a while since I had read that it would release liquid.  When it didn’t release as much liquid as I expected, I tossed in a spoonful of water and heated it on the stove.  The rhubarb softened much faster than I expected, and all of a sudden I had a pot full rhubarb mush, instead of the chunky compote I was hoping for.  Rhubarb FAIL.

Well, instead of being disappointed with my failed compote, I decided to turn it into a sauce.  I tossed in a handful of fresh raspberries, half a vanilla bean, and a few cardomom pods and let it simmer for a bit.  Then I removed the vanilla bean and cardmom, passed the mixture through my food mill and ended up with a beautiful red sauce that tasted great over my Greek yogurt as an afternoon snack.  Although the sauce was good, I wasn’t really satisfied with my first rhubarb experiment.  Luckily, I still had a bunch in the refrigerator!

It took me about a week to get back to the rhubarb, but I am so glad that I did!  The Rhubarb Blueberry Turnovers that I finally ended up with are the best pastries I’ve ever made.  I got the idea while looking through my newest baking book, The Art and Soul of Baking. If you can believe it, I received the beautiful book as a free gift when I recently attended the International Food Blogger Conference in Seattle.  Lucky me!  The book is filled with gorgeous photos and there are tons of recipes I want to try (Lemon Mascarpone Layer Cake, anyone?).  But back to the Rhubarb!   I ended up adapting a Summer Berry Turnover recipe to include rhubarb and blueberries since that’s what I had in the fridge.

What I loved most about this recipe was the simple cream cheese pastry dough.  As long as you have a food processor, the dough comes together in minutes!

First, cut a stick of cold butter into small pieces (put it back in fridge to keep it cold). 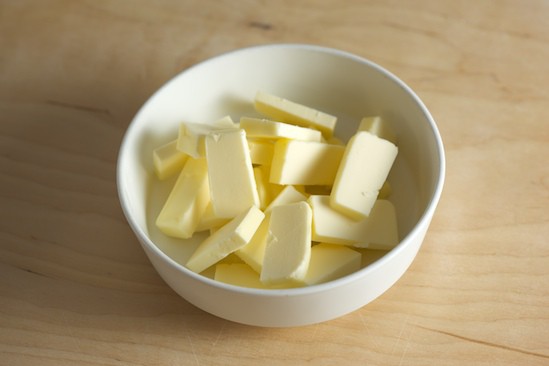 Then do the same thing with an 8-ounce block of cream cheese. 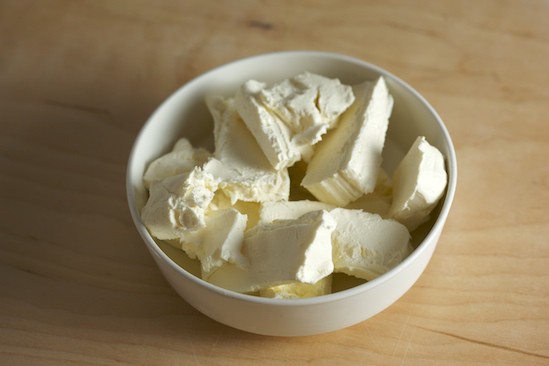 Next, combine flour, sugar and a pinch of salt in the bowl of a food processor and pulse to combine the ingredients. 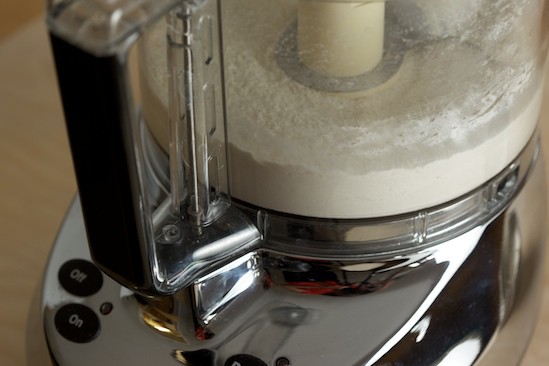 Remove the butter from the fridge and add it to the flour mixture. 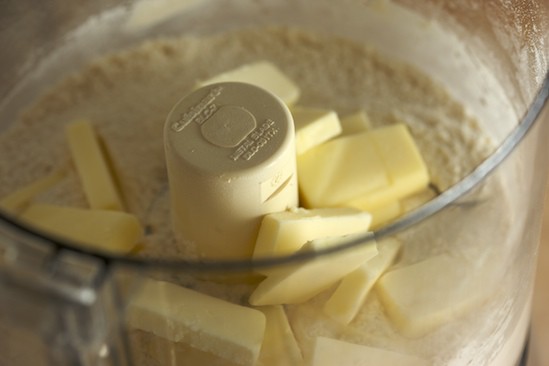 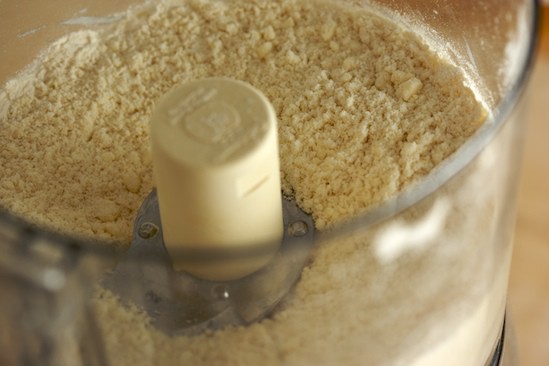 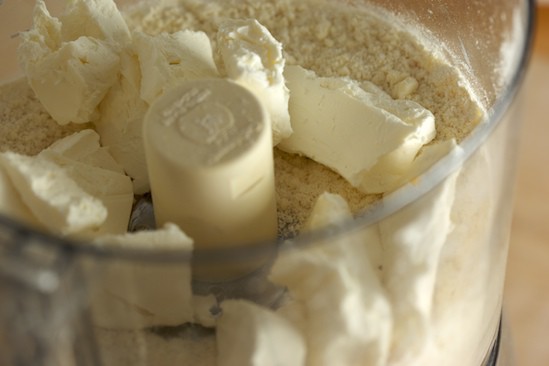 Pulse again, several times, until the dough clumps together in a shaggy mass. 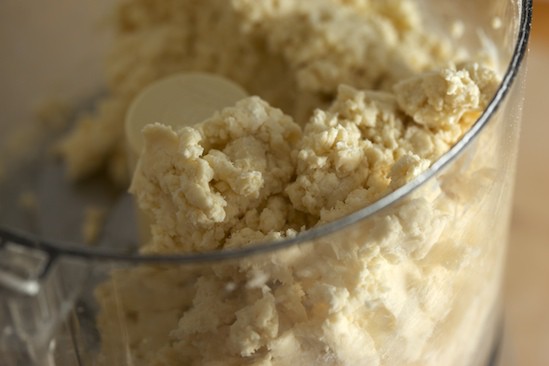 Next, dump the shaggy dough out onto a lightly floured work surface. 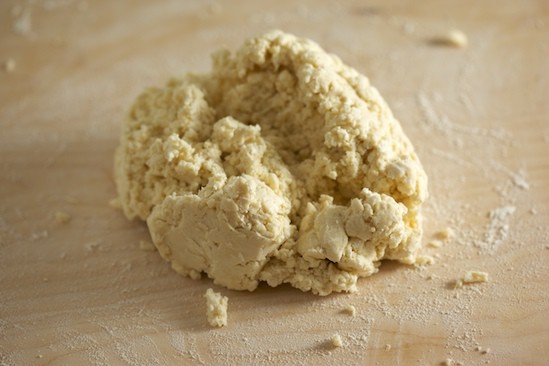 Knead the dough briefly until you have a cohesive dough, then pat it out into a square. 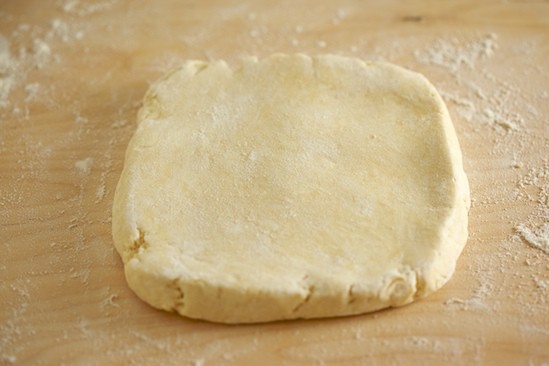 Wrap the dough in plastic, then chill in the refrigerator for 3o minutes. 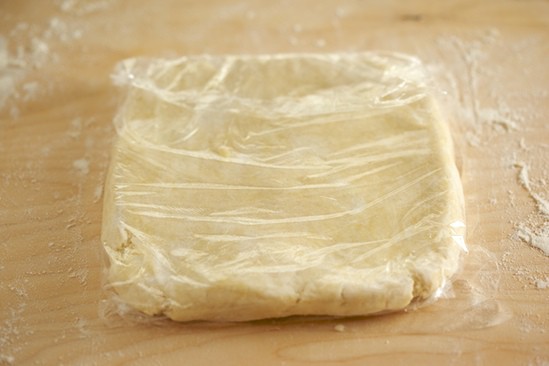 Meanwhile, chop and measure out one cup of rhubarb and one cup of blueberries. 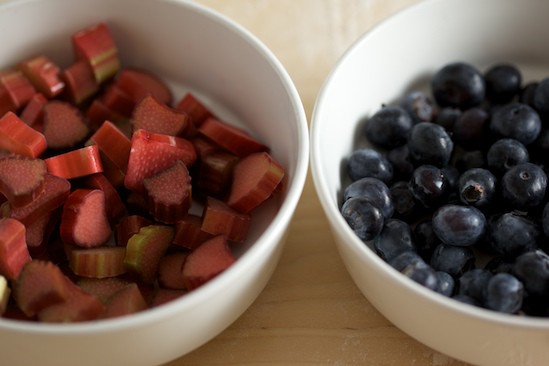 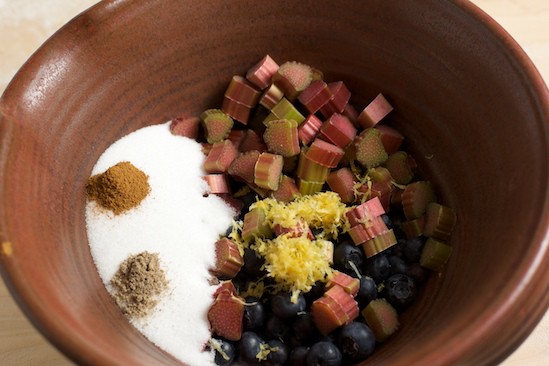 Mix the filling ingredients together well, then set aside. 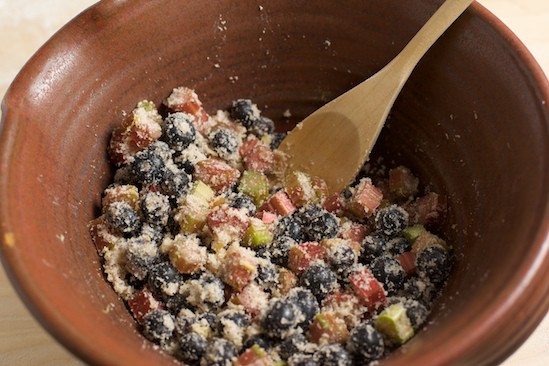 After the dough has chilled, roll it out into a big square, a little larger than 15 inches all around. 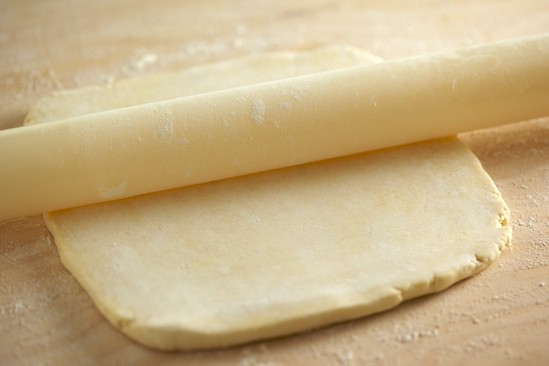 Using a ruler and a knife (or in this case, a pizza cutter), trim the dough into a 15-inch square. 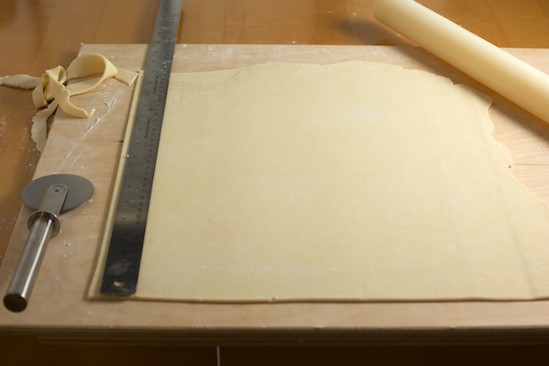 Then mark the dough in 5-inch increments on all sides and cut into 9 (5-inch) squares. 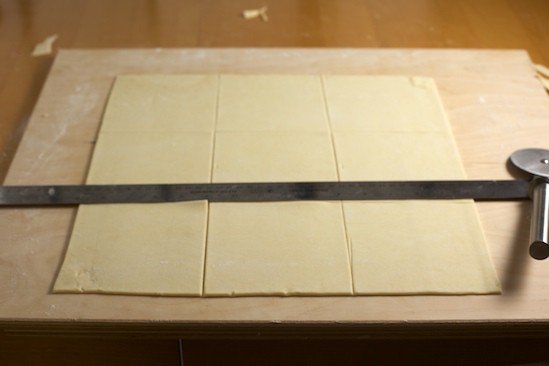 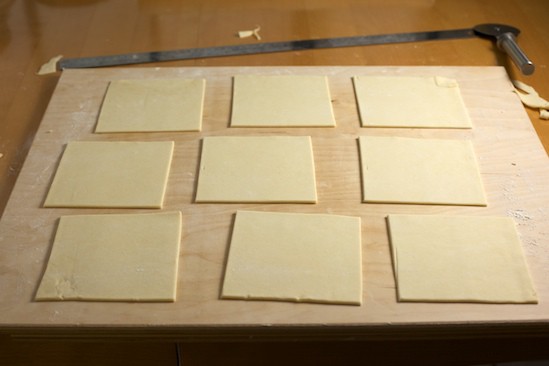 Divide the filling between each square, placing spoonfuls of it in the center of each one. 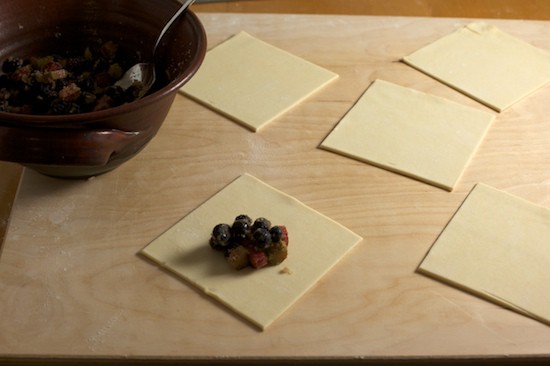 Although I forgot to do it, you should brush the edges of the squares with egg was before folding them over to form a triangle.  Gently press the edges together with your fingers. 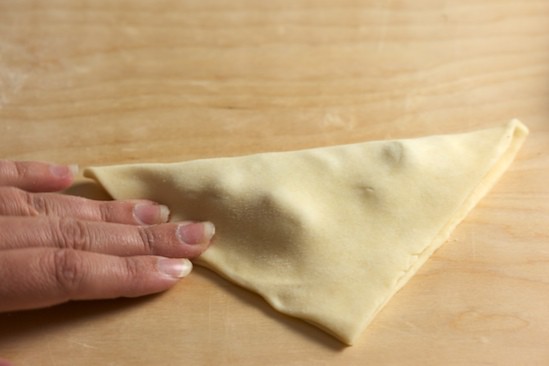 Then use a fork to seal and crimp the edges. 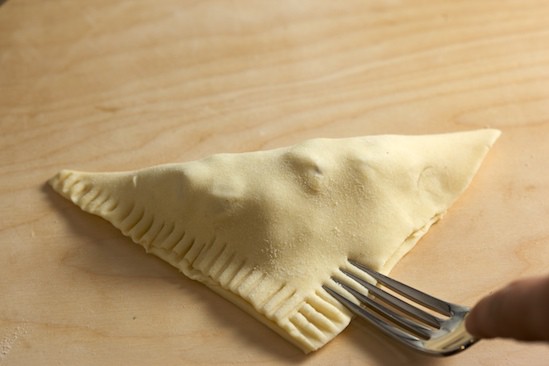 Divide the turnovers between two baking sheets, then brush each one lightly with egg wash. 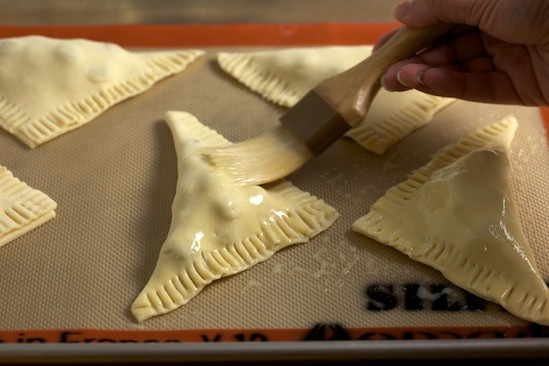 After brushing with egg wash, sprinkle coarse sugar over the tops of the turnovers. 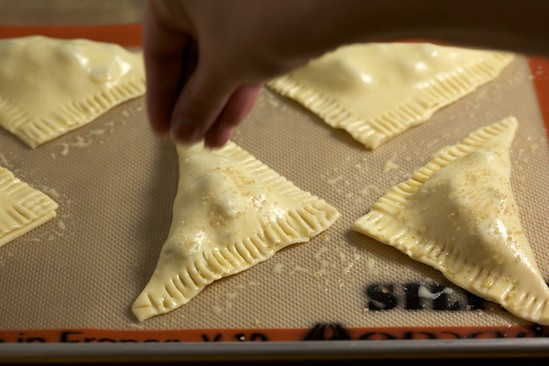 Use a small sharp knife to cut several slits in the top of each turnover.  This will allow steam to escape during baking. 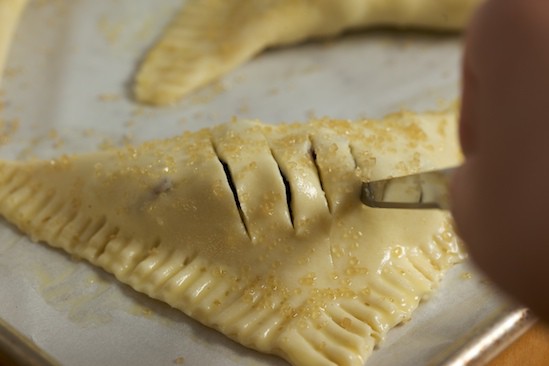 Bake the turnovers in a preheated 350 degree oven for about 25-30 minutes, rotating the sheets halfway through the baking time.  Remove from the oven when they are golden brown.  The turnovers will leak, but that’s fine! 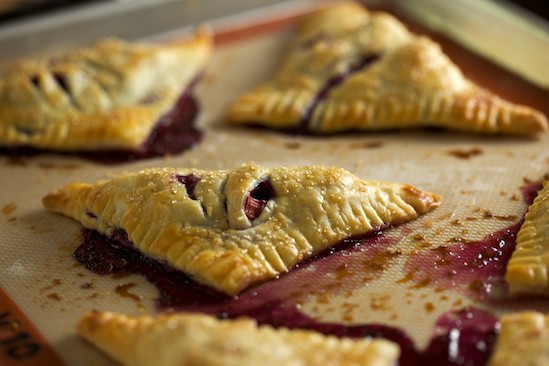 Move them to a wire rack to cool. 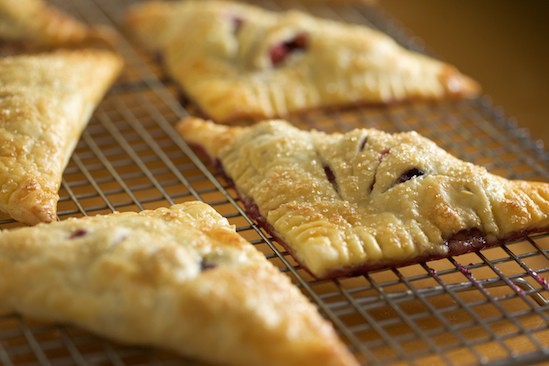 Enjoy warm or at room temperature and try not to eat the whole batch in one sitting! 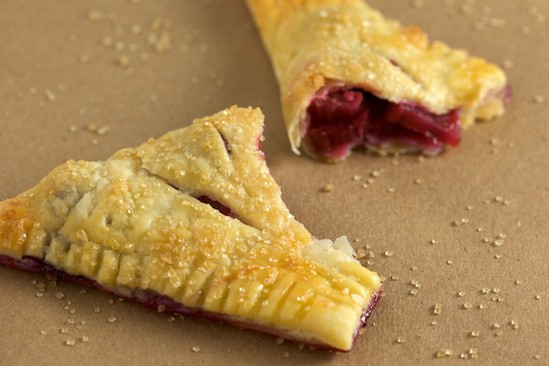 Rhubarb Blueberry Turnovers
adapted from The Art and Soul of Baking

Sanding sugar, turbinado sugar (sugar in the raw), or granulated sugar for sprinkling on the turnovers.

2. Dump the dough out onto a lightly floured board or counter and knead briefly until the dough comes together.  Pat the dough into a square (about 3/4 inch thick) and wrap in plastic.  Chill in the fridge for at least 30 minutes or up until 2 days.

3. Just before removing dough from the refrigerator, prepare the filling:  In a medium bowl, stir together rhubarb, blueberries, sugar, lemon zest, and spices; set aside.  Preheat oven to 350 degrees and place two baking racks close to the center of the oven.

4. Unwrap dough and place on a lightly floured surface.  Roll dough into a large square (slightly larger than 15 inches all around), about 1/8 inch thick.  Using a large knife, trim dough to a 15-inch square.  Use a ruler to mark 5-inch increments along each side of the dough then cut into 9 (5-inch) squares.*

5. In a small bowl, beat together the egg and milk; set aside.  Add a spoonful of rhubarb-blueberry filling in the center of each pastry square (try to divide filling between the squares as evenly as possible). Using a pastry brush, lightly brush the edges of the squares with the egg wash.  Fold the dough over the filling to form a triangle and gently press the edges together with the side of your hand or fingertips.  Use a fork to crimp the edges.

6. Divide the turnovers between two baking sheets that have been lined with either parchment or silicone baking mats. Brush the tops of the turnovers with the egg wash then sprinkle with sugar.  Using the tip of a small knife, cut several slits in the top of each turnover.  Place baking sheets on two baking racks in the center of a preheated 350-degree oven.  Bake for 15 minutes then rotate the sheets from front to back and switch them between the racks to ensure even browning.  Bake for 10 to 15 minutes longer until the turnovers are golden brown.  Transfer pastries to a cooling rack.  Serve turnovers warm or at room temperature.

Recipe Notes: *At this point, the squares can be stacked (with pieces of parchment or waxed paper between layers), wrapped in plastic and refrigerated for up to two days or frozen (place in a plastic freezer bag) for up to two months.

These were some of the best turnovers I’ve ever tasted!  They are sweet, but tart and the crust is flaky and flavorful.  I’ve already made them twice and can see myself making them again and again in the future.  Any type of berry filling would work great in these turnovers, and according to Recipe Girl, cherries work great as well!