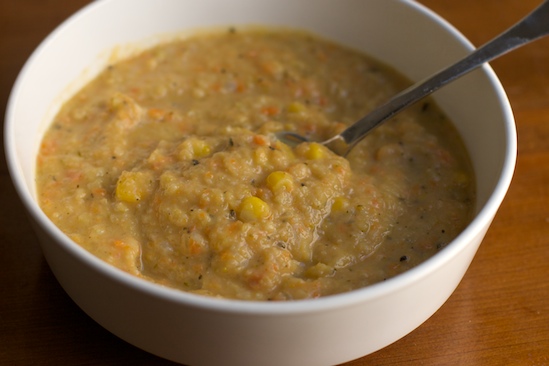 As much fun as it is to write about pumpkin, cream cheese, and pies this season, it’s nice to know that there are some wonderful Autumn recipes out there that are warm, hearty, satisfying, and healthy.  And my new favorite from that category is this rich and hearty roasted vegetable chowder inspired by two of my favorite bloggers: Karina of Karina’s Kitchen and Rachel of Coconut & Lime.

I mentioned last week that Rachel’s Autumn Vegetable Chowder was on my list of must-try recipes. Well then I read about Karina’s Roasted Vegetable Chowder and I knew I had to take inspiration from both of them!

I took a cue from Karina and roasted all the vegetables before adding them to the soup and this turned out to be one of the best soups I’ve ever made!  You already know that I love to roast vegetables, but I’ve never thought to add any liquid to roasting pan.  I followed Karina’s instructions for adding a little wine and vegetable stock to the pan after tossing the veggies with olive oil and herbs, and the results were fantastic!  The house smelled so good, I could hardly stand it!

The pureed cauliflower and potatoes added thickness to the soup, and, as Rachel suggested, milk was just the thing to add a bit of richness.  Trust me, there is no need for heavy cream in this soup!

The one thing that I added to make this soup my own, was a couple tablespoons of hot sauce stirred in at the very end.  It was just enough to add that extra boost of flavor, not really any heat.  If I were still in Sicily, I would have stirred in a spoonful of crema di peperoncino, the one ingredient that I miss more than anything!  But, I settled for some cholula. 🙂

The great thing about soups, especially vegetable ones, is that they are so easily adaptable. Rather than starting with a set list of specific vegetables in mind, I basically just cleaned out my vegetable bin for this recipe.  And since this soup was put together in such an improvisational way, the recipe isn’t really written in standard format.

After I made the soup, I sat down and quickly typed up the instructions before I had the chance to forget anything.  When I do this, it’s always written in an informal way and then I clean it up later.

I would normally have rewritten the recipe for you with a complete ingredient list on top and step-by-step instructions below.  But, like everyone else I know, I’m getting hit with the first cold/flu of the season and my brain is a little fuzzy right now.  I’m afraid if I try to rewrite it, I’ll mix something up or leave something out.

I hope you’re inspired to create your own autumn vegetable soup! 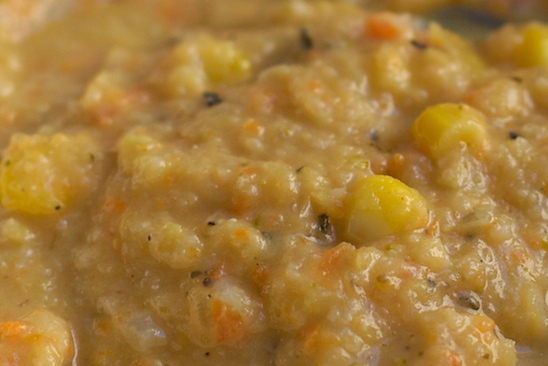 Put all of the vegetables in a roasting pan and toss with:

one cup of vegetable broth
1/2 cup of white wine

Roast at 400 degrees, stirring occasionally, until veggies are tender and slightly browned (about 30 minutes).

In a large saucepan, heat two tablespoons of butter over medium heat, then add:

Cook, stirring for about five minutes or so then add the roasted vegetables, making sure to scrape out all the liquid with a spatula. Next, add three more cups of vegetable broth. Bring to a simmer, then puree with and immersion blender, leaving it just a bit chunky.

Add one cup of milk and one cup of defrosted frozen corn, and heat through.  Season with salt and freshly ground pepper to taste.  Finally, add a tablespoon or two of hot sauce, to taste (I used Cholula).