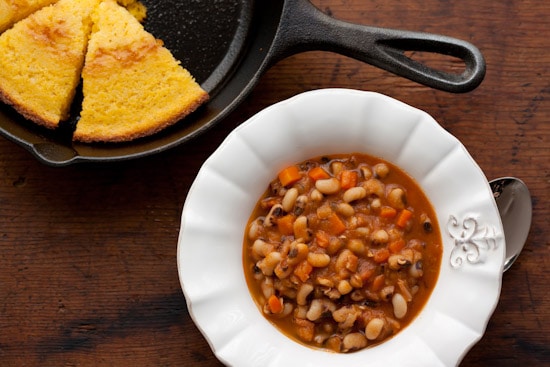 While it’s hard to believe that another year has flown by, I have to say that I’m more than ready to move on.  Goodbye, 2010, I’ve learned a lot from you, but you won’t be missed.  I’m heading into this new year arms outstretched, with open heart and mind, ready to learn, experience, and share.

I plan on working hard to make this year great, but a little luck never hurts.  I could think of no better way to welcome the new year than with a traditional southern dish thought to bring prosperity and luck if eaten on New Year’s Day – black-eyed peas.

I grew up eating black-eyed peas only occasionally.  My mom would simmer them with ham hocks and we’d eat buttered corn bread on the side.  It was always a hearty and delicious meal, but never something I associated with New Year’s Day.  It wasn’t until we were living overseas and spending holidays with other military families from around the country that I first learned about the southern tradition of eating black-eyed peas for luck in the new year.

But my black-eyed peas have a spicy twist.

I am thrilled to announce that I have struck up a partnership with The McCormick Gourmet Collection as one of their “Real Gourmets.”  A handful of my favorite bloggers are also participating – Jaden from Steamy Kitchen, Jenny from Picky Palate, and Shauna and Danny from Gluten-Free Girl and the Chef are the other Real Gourmets and we will all be exploring the world of spices and sharing recipes and tips on our blogs. As you already know, I love to experiment with spices, so I am very excited about the Real Gourmets program!

Back to the black-eyed peas.  As I mentioned, they have a twist.  As I was exploring the 2010 Holiday Edition McCormick Flavor Forecast, I was struck by the suggestion of pairing roasted cinnamon and bacon.  It sounded amazing and I knew I’d have to incorporate those flavors into my New Year’s Day black-eyed peas.  Of course I couldn’t just stop there.  Thanks to a shipment from McCormick, my spice cabinet is bursting at the seams and I love to open the jars, inhale, taste, and explore flavor combinations.

I decided to use smoked paprika and roasted cumin to enhance and compliment the smokiness of the bacon, and ground chipotle chili pepper to add a smoky heat.  To balance the smoke and heat and complement the cinnamon, I added some sweetness with onion, carrot, and tomato paste.  All of the flavors meld beautifully into a complex pot of beans that is different enough to take notice, but familiar enough to satisfy a craving for traditional comfort food. 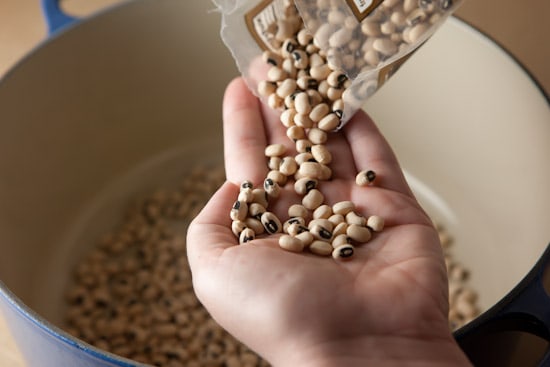 Although you could start with canned beans, I prefer to start with dried.  They are much cheaper, you’ll end up with better texture, and you’ll have more control over the sodium content of the finished dish.  When using dried beans, you need to sort through them to search for any foreign objects like small pebbles.  Most of the time, I don’t find much, but it’s better to take a few minutes to make sure.  When I pick over beans, I just look through them a handful at a time, removing anything that looks strange, and dumping the good ones right into the pot.  After picking over the beans, cover them with lots of cold water and let them soak overnight, if possible.  If you don’t have time for that, use a quick soak method. 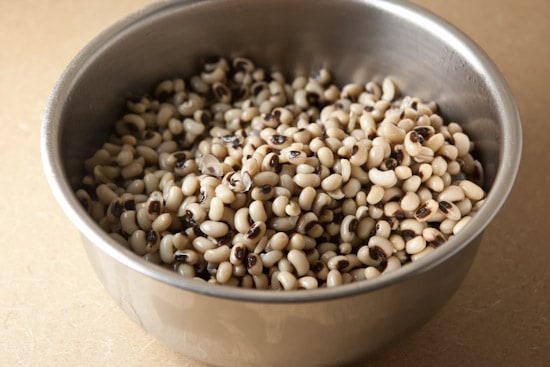 These are the beans after soaking – they will have plumped and the skins will be smooth.  While soaking beans isn’t always necessary, I decided to do it for this recipe.  If you want to skip that step, plan on adding a bit of extra water and an extra hour or so to the cooking time.  I haven’t tested this particular recipe without soaking the beans, and cooking times vary according to how old the beans are, so I can’t give you exact amounts of time or water. 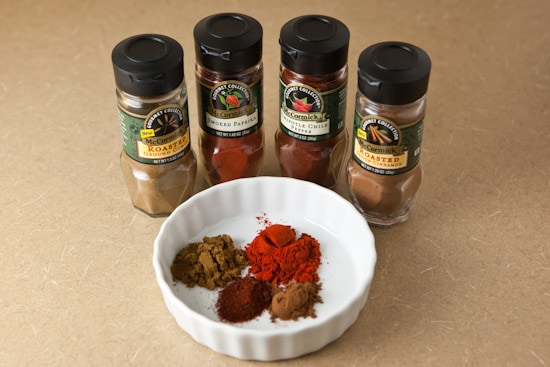 I was very happy with the spice amounts I chose for this recipe, but if you’re cooking for children or someone who is sensitive to heat, you may reduce the amount of chipotle chili.  As always, I encourage you to play around with the spices a bit to make this dish your own! 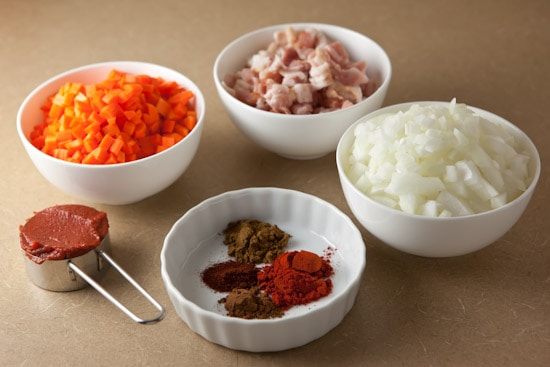 I like to dice the bacon, onion, and carrots into small pieces so that they can spread all throughout the pot of beans and each bite will be filled with a bit of everything.  As a general rule, you should chop and measure out your ingredients before you begin cooking and keep everything nearby – it will make life in the kitchen much easier! 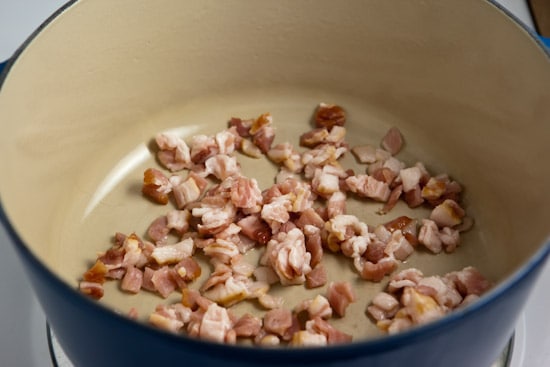 You will want to start with a large pot – at least 4 quarts.  This time I used a 5-quart enameled cast iron dutch oven, but I sometimes use a big stainless steel pot.  It just depends on my mood and what happens to be clean! 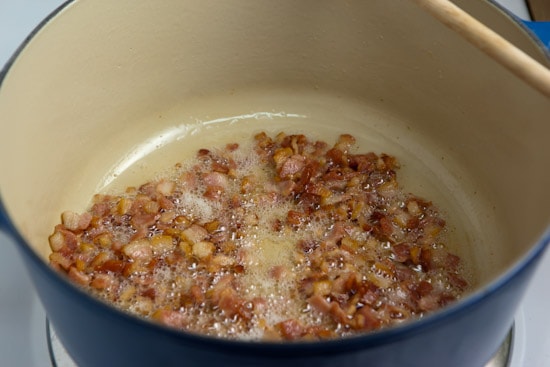 The first thing you’ll do is cook the bacon over medium heat until it’s starting to crisp and the fat is rendered.  Depending on how fatty your bacon is, you may want to pour off some of the grease – just make sure to keep at least a few tablespoons of bacon fat in the pan because you’ll need it for cooking the onions and carrots.  I usually don’t bother pouring any of it off. 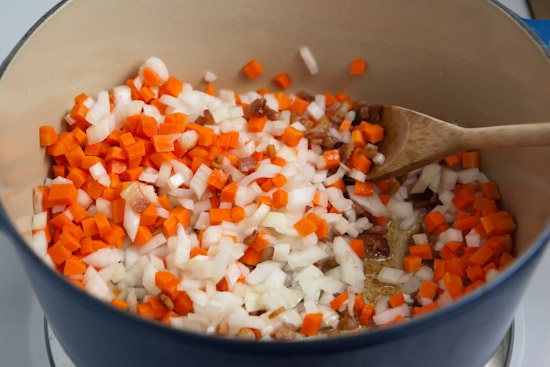 Add the onions and carrots to the bacon and reduce the heat slightly to medium-low.  Cook the vegetables, stirring occasionally until very soft and just starting to brown, about 15-20 minutes. 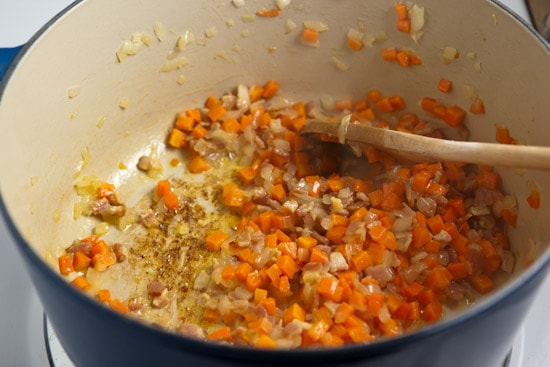 You’ll notice the stuff stuck to the bottom of the pot will turn brown and darken – this is good, but don’t let it burn. 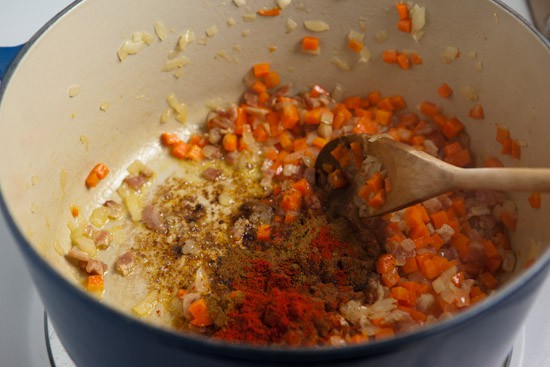 Next you’ll add the dry spices.  Stir in the spices and cook, stirring, for about 30 seconds. 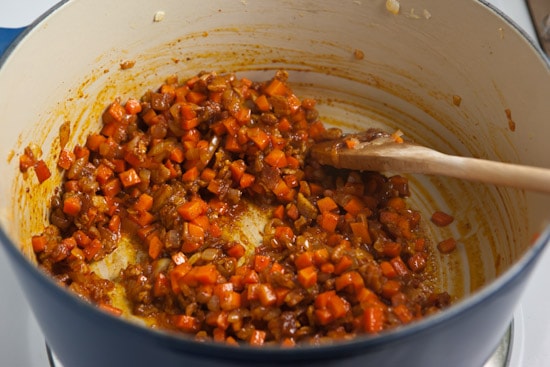 As you stir, scrape up the browned bits from the bottom of the pan as much as possible – the rest will come up when you add the liquid. 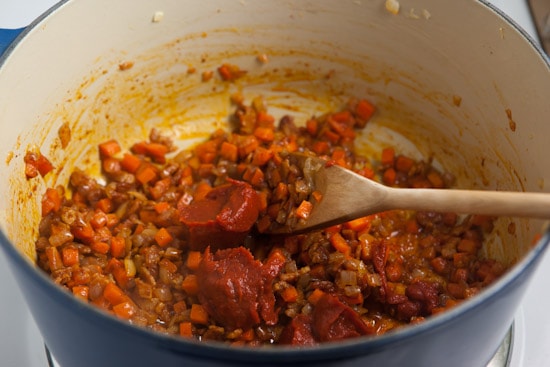 Next, add the tomato paste.  Stir it in and continue cooking and stirring for another 30 seconds. 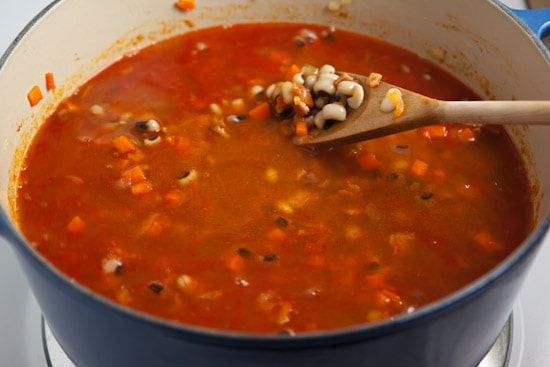 Finally, add the soaked black-eyed peas and about 6 cups of water.  Turn the heat up to high, bring the liquid to a boil, then reduce the temperature low enough to just maintain a gentle simmer.  Cover the pot, but leave the lid cracked a bit.  Let the beans simmer, stirring occasionally, until tender, about an hour or so. 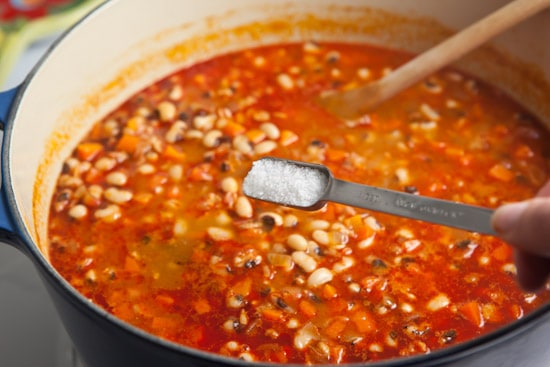 When the beans are cooked, season with sea salt and freshly ground black pepper to taste.  I used about 2 teaspoons of McCormick® Gourmet Collection Sicilian Sea Salt. 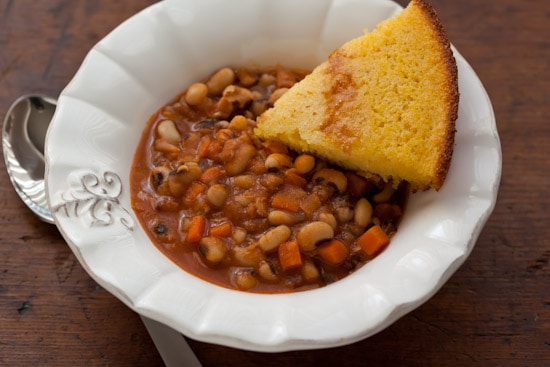 Soak black-eyed peas in enough cold water to cover by a few inches for 8 hours (or overnight) or use the quick soak method*.

In a large, heavy saucepan or dutch oven, cook bacon over medium heat until fat has rendered and bacon is just starting to crisp.  Add onions and carrots and cook, stirring, over medium-low heat until vegetables are softened and beginning to brown, about 15 to 20 minutes.  Stir in spices and cook, stirring, for about 30 seconds.  Stir in tomato paste and cook for another 30 seconds.  Add the soaked black-eyed peas and 6 cups of water.  Bring to a boil over high heat, then reduce heat low enough to just maintain a gentle simmer.  Cover, but leave the lid cracked.  Simmer, stirring occasionally, until beans are tender, about one hour.

*To quick-soak beans: In a large saucepan, cover beans with 2 quarts of cold water.  Bring to a boil and let cook for 2 minutes.  Remove pan from heat, cover, and let beans soak for one hour.  Drain and rinse beans, then continue with recipe.