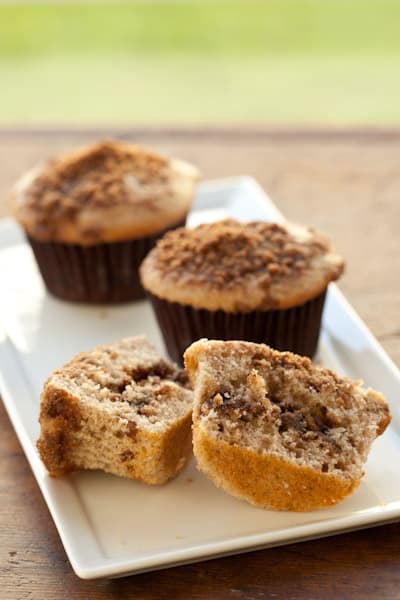 I’ve never been a huge fan of crumb-topped coffee cakes.  I’ve had so many that were dry and boring that I decided early on that I’m just not really into coffee cake.  But my mom used to make one called a Sour Cream Pound Cake and I loved it.  It’s not actually a pound cake since it starts with a box of cake mix and contains oil instead of butter, but it’s delicious nonetheless.  The fun thing about the cake is that it contains surprise layers of cinnamon cocoa pecan streusel throughout.

I always thought it was odd that the name of the cake doesn’t even hint at all the delicious flavors contained inside.

About a month ago, I started thinking about cinnamon muffins.  I’ve been having a love affair with the new McCormick Gourmet Roasted Saigon Cinnamon and you all know how much I love making muffins.  It was natural that the two should come together.  I decided to try making a cinnamon muffin that was loosely based on my mom’s sour cream pound cake, so I started playing around with the idea of tucking a layer of cinnamon pecan streusel inside the muffins.

While I was at it, I decided to add a streusel topping to the muffins as well, essentially turning them into mini coffee cakes.  But these are coffee cakes that I actually enjoy!

It took several batches before I finally got it right, but the end result is wonderful.  They are mini sour cream cinnamon cakes filled with a layer of brown sugar, pecans, cocoa and cinnamon.  The streusel topping also contains cinnamon with a hint of cocoa.

If you’re still reading this post, chances are you’re a cinnamon lover.  But how much do you really know about cinnamon?  Here are some fun facts from McCormick’s Enspicelopedia:

Cinnamon is the dried bark of tropical evergreen trees of the genus Cinnamomum. A thin layer of bark is stripped from the tree and dried in the sun, which makes it curl into the familiar quill shape of stick cinnamon. Cinnamon is characteristically woody, musty, and earthy in flavor and aroma. It is available as whole sticks, ground and as extract.

One bite of hot buttered toast with cinnamon and sugar explains this spice’s enduring popularity. It is a fixture in North American and European baking, flavoring sticky buns, raisin bread, custards and creams, cookies and candy. In Spain and Mexico, it is often paired with chocolate. But cinnamon has the personality for savory dishes as well. Chili is often sparked by its warmth, as are Middle Eastern and North African dishes like lamb tagine and chicken stew. To go Indian style, try adding a pinch to rice pilaf with chopped dried apricots and green onions.

Today’s cinnamon is sourced from four countries. Cinnamomum burmannii, the most common form used in the U.S., hails from Indonesia. Saigon cinnamon, Cinnamomun loureirii, from Vietnam is considered the finest because of its high volatile oil content. Chinese cinnamon, Cinnamomum cassia, is the base of Chinese Five Spice blends. And Cinnamomum zeylanicum, from Sri Lanka, has a mild flavor and distinctive citrus note that make it popular in Mexican and Central American cooking.

Believe it… or not

Once considered a prized gift for royalty, cinnamon has a long and colorful history. Ancient Egyptians used it for cosmetics and embalming, sending buying expeditions to present-day Somalia in hopes of obtaining it by sea through spice-trading routes from Southeast Asia. The word cinnamon means “sweet wood” in Malay. The Romans believed cinnamon to be sacred and burned it at funerals. Cinnamon was one of the first spices sought in the 15th century European explorations, and some say it indirectly led to the discovery of America. Biblical references focused on its sensual fragrance; Solomon, in a song about his beloved, reveled in her cinnamon-scented clothing.

So are you cinnamon lovers ready to make some muffins?  This is how you do it:

Before starting the batter, you should mix up the pecan filling and cinnamon streusel.  In a small bowl, stir together the brown sugar, cinnamon, cocoa, and chopped pecans.  I like to mix it with my fingers so that I can break up any lumps in the brown sugar. 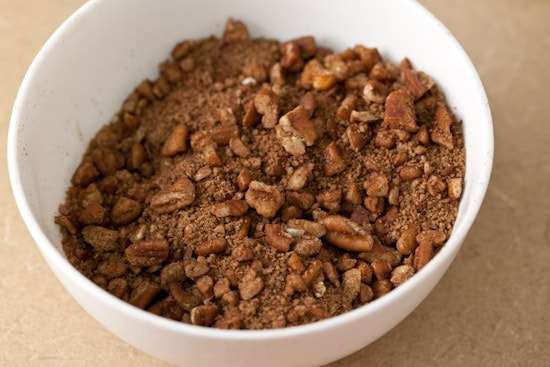 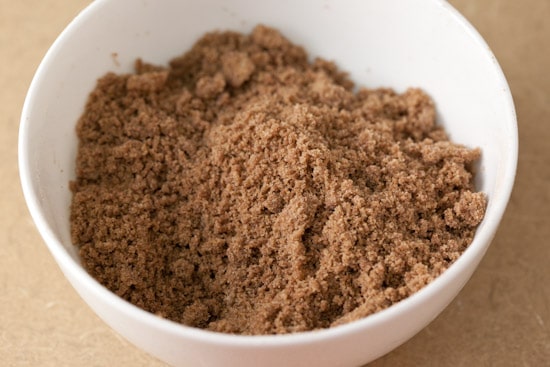 To make the batter, you’ll mix the wet and dry ingredients separately then combine them in a large mixing bowl. 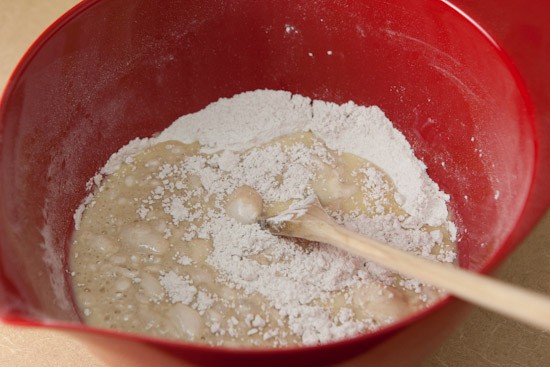 Stir the batter until well combined, making sure to scrape your spoon along the bottom of the bowl to ensure all the flour gets mixed in. 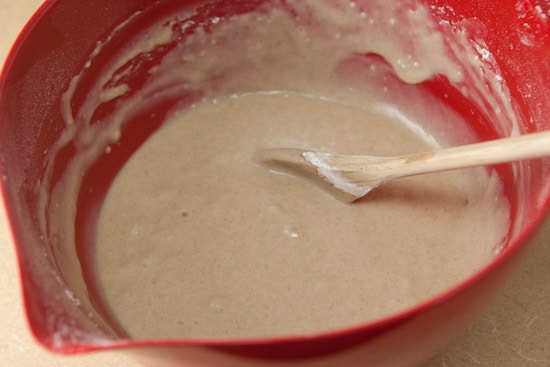 Fill the muffin cups about 1/4 full, about a tablespoon of muffin batter.  I used a small cookie scoop for this, but you can use a spoon.  Make sure not to add too much batter at this point or you’ll run out of batter for the top layer. 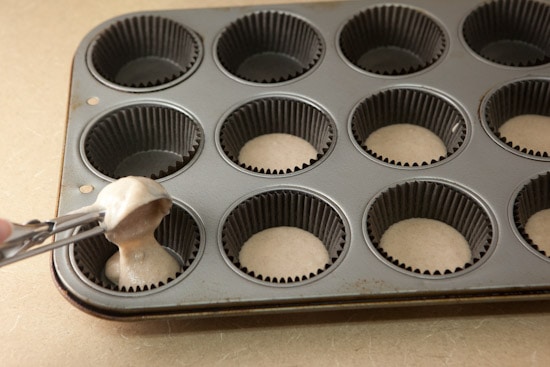 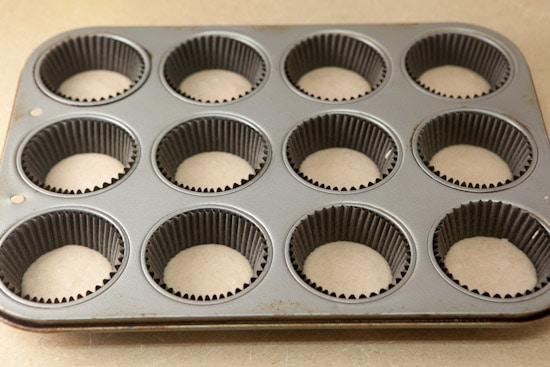 Now add the filling.  Pour rounded tablespoons of pecan filling over the bottom layers of batter. 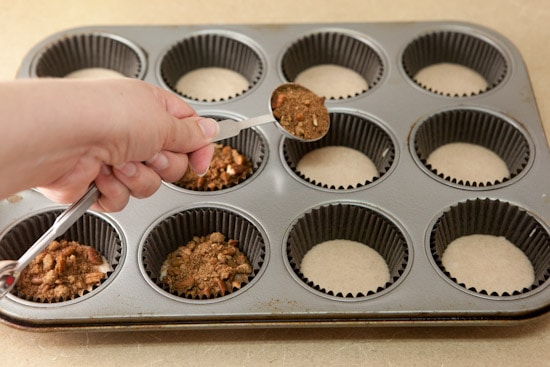 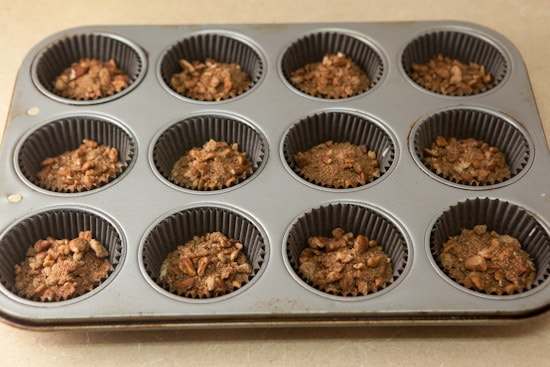 Next, add the second layer of batter.  This time, you’ll be adding twice as much batter, about two tablespoons per muffin cup.  I used my larger cookie scoop for this, but you can use a spoon.  The cups will be filled almost to the top. 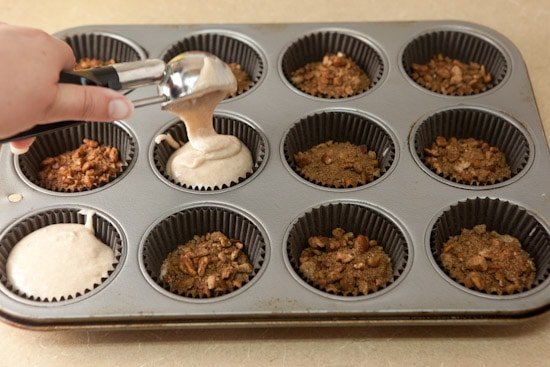 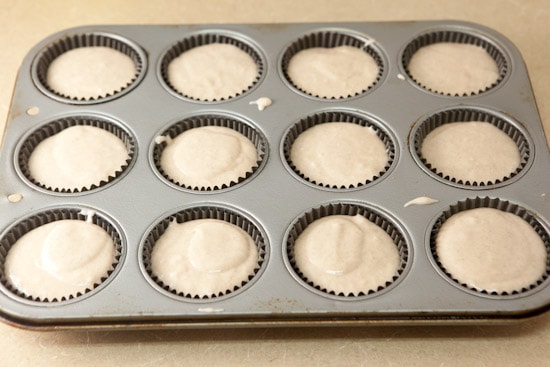 Now it’s time for the streusel.  Top each with a round tablespoon of streusel topping. 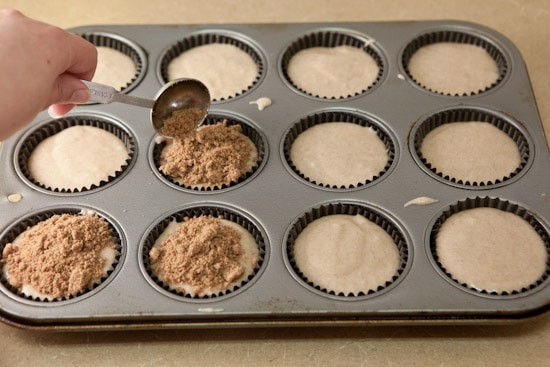 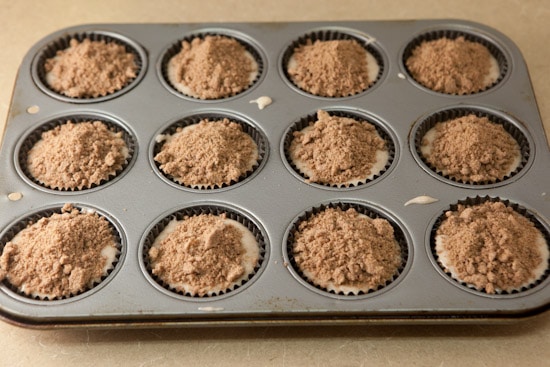 Bake muffins in a preheated 375 degree oven for 21-23 minutes, or until muffins spring back when lightly touched in the center or a toothpick inserted in the center of a muffin comes out clean.  Let cool for a few minutes in the tin, then transfer muffins to a wire rack and let cool completely. 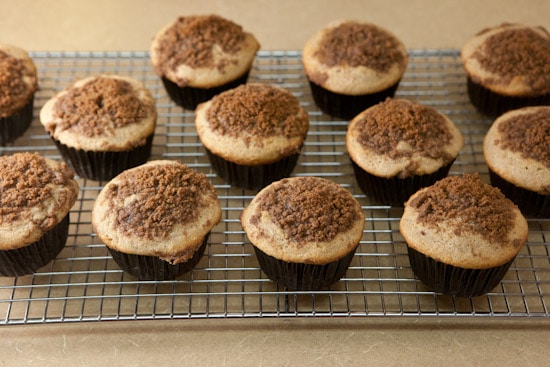 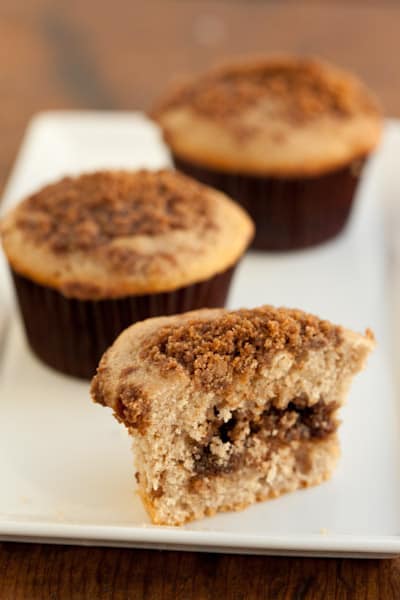 1. Place rack in the center of oven and preheat to 375 degrees. Line a 12-cup muffin tin with paper cups or spray with nonstick baking spray.

2. Make filling: mix filling ingredients in a small bowl with a spoon or your fingers until well combined; set aside.

3. Make streusel topping: In a separate bowl, stir together brown sugar, flour, cinnamon, and cocoa. Cut in butter with a pastry blender or your fingertips until mixture resembles coarse crumbs; store in refrigerator while making batter.

4. Make batter: In a large bowl, whisk together flour, baking powder, baking soda, cinnamon, and salt until well combined. In a separate bowl, whisk together sour cream, butter, milk, eggs, sugar, and vanilla. Pour egg mixture into flour mixture and stir with a wooden spoon until well combined, making sure to scrape all the flour off the bottom of the bowl when stirring.

*Measure cake flour by spooning flour into a dry measuring cup then leveling off with a knife. If you prefer to weigh your flour, one cup of cake flour is 4 oz. There is no need to sift the flour.