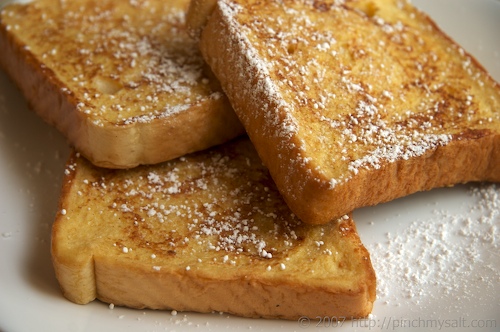 Get into the holiday spirit a little early this year with some quick and easy egg nog french toast for breakfast! Although drinking spiked egg nog for breakfast might be frowned upon, sneaking a touch of rum into your french toast won’t cause any harm. Don’t worry, it will be our little secret!

I was surprised to see egg nog for sale at our grocery store on base last week because it seems a little early. I don’t really drink the stuff but I picked up a quart when I saw because my husband loves egg nog! I like the flavor of it but it’s just too thick and rich for me. The way it coats my throat as I’m drinking it just reminds me how unhealthy it actually is!

But one day when I saw it sitting in the fridge it occurred to me that egg nog would be perfect in french toast! I usually add some cinnamon and vanilla to my french toast anyway so I figured that egg nog instead of milk would just make it that much better! The rum was an afterthought but it really adds a great flavor!

If you’re making this for kids or if you don’t have any rum on hand, just omit it and add half a teaspoon of vanilla in it’s place.

I used texas toast style bread for this recipe which is basically just white sandwich bread that has been sliced thicker than normal. I get it in the grocery store but I don’t think it’s available everywhere. Feel free to use whatever type of bread you like. Thick-sliced bread that is just slightly stale works great for french toast.

For a really special version of this recipe, try using brioche or homemade Cinnamon Swirl Bread!

My postings will probably be shorter and rather sporadic over the next few weeks. As I have mentioned, we are in the process of preparing to move back to the United States after being here in Sicily for the last four years. Part of our stuff was packed up and picked up today and by Monday, everything will be gone. I won’t see anything from kitchen for about two months!

We’ll be living here with some borrowed furnishings for a little while longer but I’m not sure what kitchen gear I’ll end up with! I do have lots of pantry items that can’t be shipped and need to be used up before we leave so I will be doing some baking and cooking during the next two weeks even if it means borrowing some some pans from friends!

Whisk together eggs, egg nog, rum and spices. Heat a griddle. Dip bread in egg mixture, allowing it to soak in slightly. Butter the hot griddle and place soaked bread on the griddle. Cook on each side until golden brown. Serve with butter and powdered sugar or syrup.

Previous Post: « How to Cut an Onion with Fewer Tears: A Photo Tutorial
Next Post: Happy Halloween! »