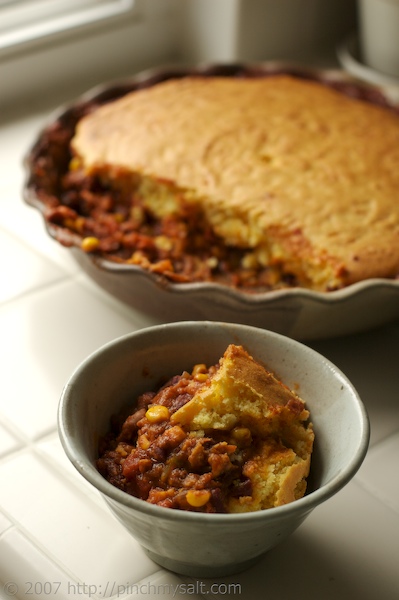 The vegetarian three bean chili from the other night turned out really great! As I had mentioned, I decided to try topping the chili with cornbread batter and baking it. I’ve never done this before but several of you talked about it during our weekend cornbread discussion and it sounded like a pretty good idea to me!

I decided to use an extra large pie plate for my creation but any kind of baking dish would work fine. First, I filled it about halfway with the chili beans. 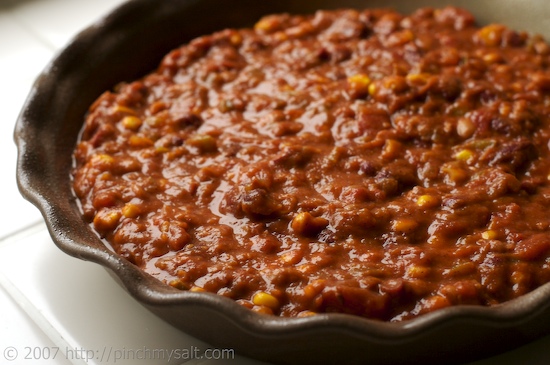 Next I mixed up the cornbread batter. I used the Marie Callender’s mix that they sell at Costco. I’ve never used a cornbread mix before but my sister happens to have a huge bag of it that needs to be used up. So, I used two cups of cornbread mix and one cup of water. Then I folded in some shredded sharp cheddar cheese. Finally, I spooned the cornmeal batter over the top of the chili and smoothed it with a spatula. 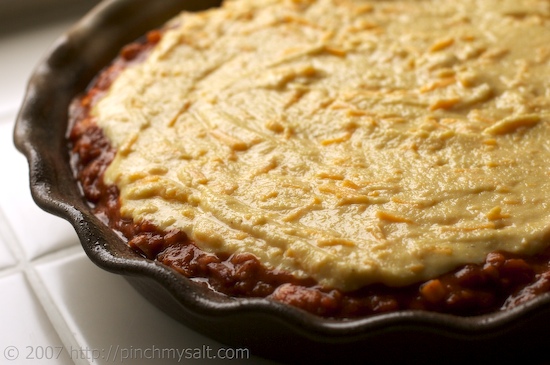 I baked the chili pie for about 25 minutes in a 375 degree oven until the cornbread was golden brown and cooked all the way through (I checked it with a toothpick in the center). 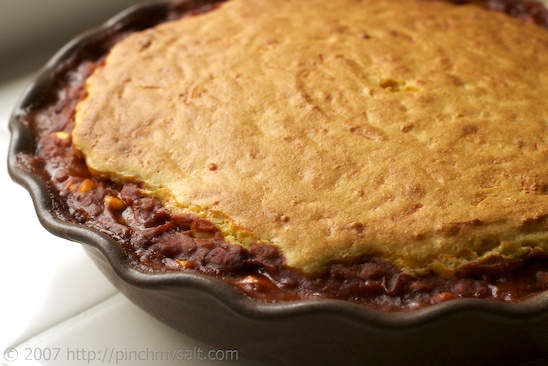 My sister really loved this dish but I thought the Marie Callender’s cornbread was way too sweet. It tasted more like cake than cornbread. And my chili beans were fairly sweet already since I had used an entire can of tomato paste. So the corn cake on top was just a little too much! I think this would have been much better with a homemade cornbread batter with less sugar.

After finding out how sweet the Marie Callender’s mix was, I decided it would make better muffins than traditional cornbread. I experimented last night and made some pumpkin corn mini muffins that turned out really great! I mixed 1 1/2 cups of corn bread mix with a teaspoon of cinnamon, added 3/4 cup pumpkin puree, 1/2 cup of water and one teaspoon of vanilla and stirred together to make a batter. That amount filled 18 mini muffin cups. I baked them at 375 degrees for about 12 minutes. They really were tasty! I didn’t take photos this time but I’m sure I’ll be making them again soon!

I hope you all have a wonderful Thanksgiving tomorrow! I’ll be eating with my sister’s in-laws and I’m planning on making a butternut squash casserole in the morning to take with us. I’ve also been thinking about some goat cheese and cranberry tartlets but since it’s just an idea in my head rather than an actual recipe, I’m not sure if they’ll get made or not. Tune in tomorrow to find out!