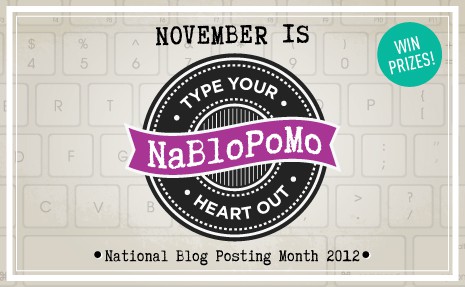 Well, it’s here again.  November is National Blog Posting Month – the time of year when a whole bunch of crazy bloggers commit to updating their blogs every single day for an entire month.  I’ve done it twice before, but 2008 was the last year I was brave enough to join in.  Has it really been four years?  Well, enough time has passed that I don’t quite remember how stressful it was the last time, so I’ve decided to jump in again!

For NaBloPoMo 2008 I actually committed to posting a new recipe every single day, but I am not doing that this year.  That was crazy.  I am, however, attempting to do this while my fiance and I are in the middle of completely renovating a house that we recently bought, so that should make things difficult enough.  Yes, I did say fiance and I did say that we bought a house.  I haven’t shared much of my personal life on here for some time, but it’s been quite a year!  And since I’ll be writing something every day this month, I suppose you’ll soon know more about my life than you ever wanted.

The main reason I’ve decided to do this is that I need to find my blogging voice again.  With all the ups and downs of the last few years (it’s been a bumpy, bumpy road), I really feel like I’ve lost touch with Pinch My Salt.  The person I was back in 2006 when I was a military spouse living in Sicily and the person I am today might not even recognize each other if they were in the same room having a conversation.  And the world of food blogging itself has changed so much since I first started that I hardly recognize it.