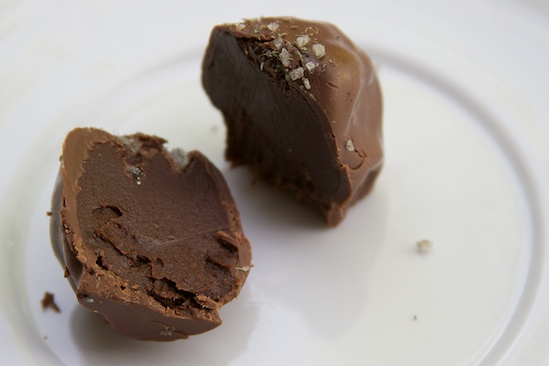 Chocolate just isn’t something that come to mind when you think of California’s southernmost city. But Will Gustwiller, owner of Eclipse Chocolat, is on his way to changing that.

Besides being owner, Will is the head chocolatier of this San Diego-based artisan chocolate shop. This isn’t the corner candy shop you remember from your youth. Eclipse specializes in creating exotic chocolate infusions in truffles, chocolate bars, and a variety of other confections such as crème fraîche cupcakes and dark chocolate croissant bread pudding with creme anglaise.

But Eclipse Chocolat is a special kind of business for reasons other than its amazing chocolate creations. As you walk into the shop, you will see the Eclipse Chocolat Pledge painted on the wall:

Those of you who read Pinch My Salt regularly know that this post is a bit of a break from the norm. For one thing, I don’t normally frequent high end chocolate shops (I’m not much of a chocoholic). For another, I don’t normally write reviews of such places. So what the heck is going on?

Well, I was lucky enough to be invited to Eclipse Chocolat for a San Diego Foodblogger Mixer! That’s right, in addition to sampling some amazing desserts, I got to meet and mingle with a whole bunch of local foodbloggers!

As an American writing a food blog in Sicily, I was a bit isolated from the rest of the foodblogging world (geographically, that is). I was always jealous when I would read about other bloggers meeting up for dinner and becoming friends in ‘real life.’ All of that changed during my trip to New York and Chicago last summer when, for the first time, I got to meet some of my favorite foodbloggers in person. And it was wonderful to discover that they are all as much fun in person as their blogs suggest!

So when we finally had to pack up and make the big move from Sicily back to the states, one of the things I looked forward to was becoming a part of a local foodblogging community!

Although I haven’t been writing much lately, I was really excited when I received the evite from Will inviting myself and several other San Diego Foodbloggers to meet up and indulge in some complimentary dessert tasting platters. I admit I was a little nervous, as I always am in large groups of people I’ve never met, but the event turned out to be lots of fun and I met a great group people!

And let’s not forget about the desserts… 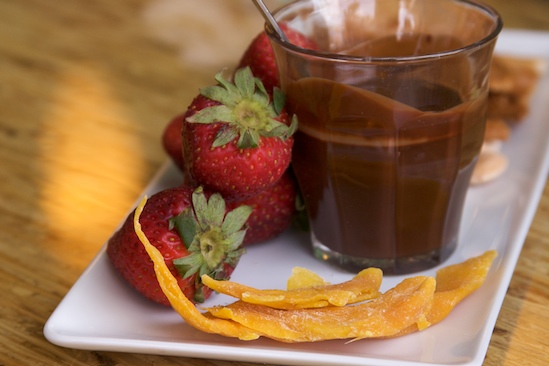 Chocolate and Olive Oil Fondue. The combination sounded strange but it was good, especially with the strawberries! 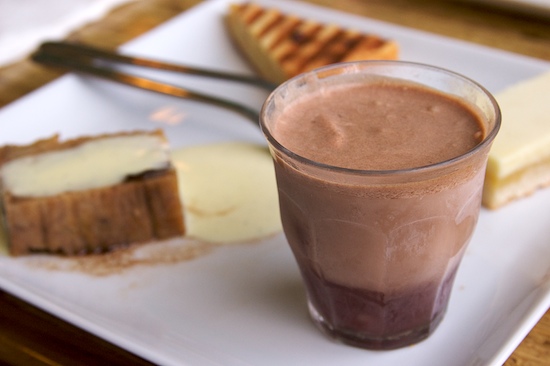 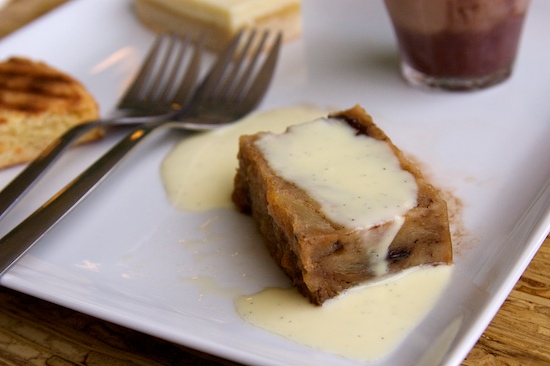 A better view of the bread pudding from the same platter. 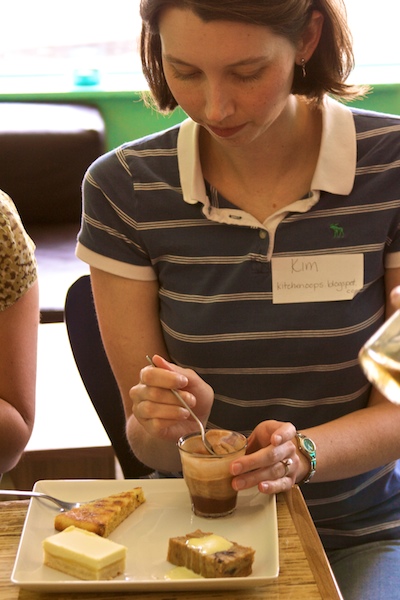 Kim from Foolin’ Around in the Kitchen digs into that yummy frozen mousse! 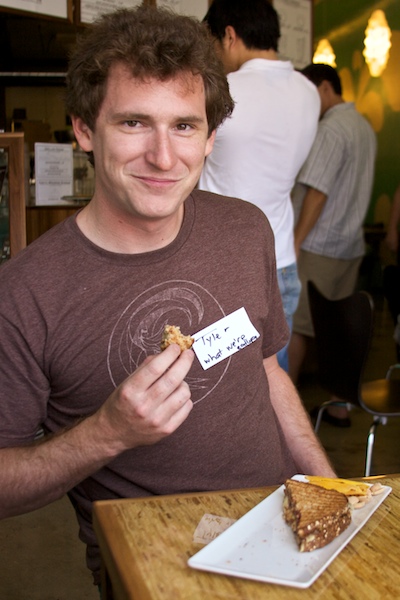 Tyler of What We’re Eating with a Roast Beef Panini that apparently contained chocolate in some form or another. Yes, Eclipse Chocolat also offers sandwiches! 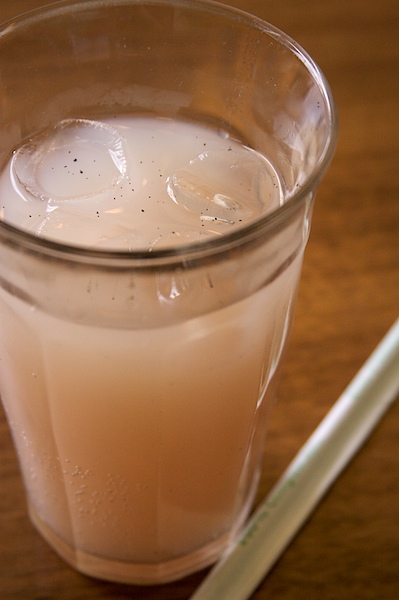 Surprisingly, this Lavender Vanilla Bean Lemonade was one of my favorite things! 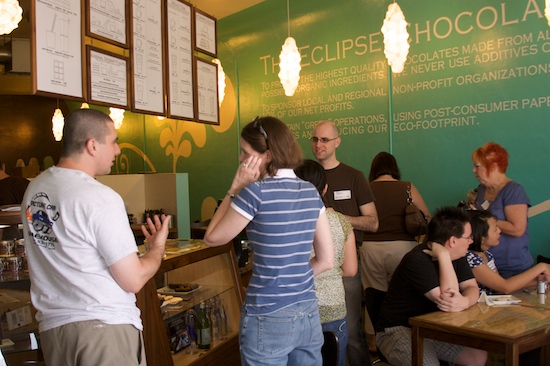 Unfortunately I didn’t get a good group shot of everyone but as you can see, there was lots of mingling going on! Will had the great idea for us to wear name tags featuring our first name plus the name of our blog.

Again, I do not consider myself to be a chocoholic and I freely admit that I prefer milk chocolate over dark. But truffles, whether made from milk or dark chocolate, are one of my weaknesses. The one below consisted of caramel chocolate ganache dipped in milk chocolate, topped with Lavender-scented gray sea salt and we were each given one as a parting gift.

Not sure how I managed to photograph that truffle before biting into it but it really was as good as it looks! I loved the crunchy sea salt on top and the hint of lavender worked well.

All in all, it was a great afternoon. My only regret is I didn’t get a chance to chat with everyone who was there. I guess we’ll just have to plan another event! Some of the bloggers I did get a chance to meet were:

Marie from Adventures of an Amateur Foodie
Kim from Foolin’ Around in the Kitchen
Alice from Alice Q. Foodie
Tyler and Amanda from What We’re Eating
Roger from The Fifth Deadly Sin
Katherine from Koko’s Corner
Darlene from My Burning Kitchen
Dennis and Elena from Sea Rocket Bistro
Liz from Fooding 411
Caron from San Diego Foodstuff
Marcie from FoodBuzzSD
Angie from CrazySalad
Ben from Ben Bakes a Cake
Josh the SD Chowhound
Will from Eclipse Chocolat Blog

I apologize because I’m sure I’m missing a few of you! If you know of anyone I’ve left out, let me know in the comments and I’ll add them to the list!

In short, the San Diego Foodblogger Mixer was quite a success. Not only did I get to meet a great group of people but I was introduced to a wonderful local chocolate shop that I probably never would have sought out on my own.

So, if you happen to find yourself in San Diego and in need of a serious dessert fix, Eclipse Chocolat is the place to go! 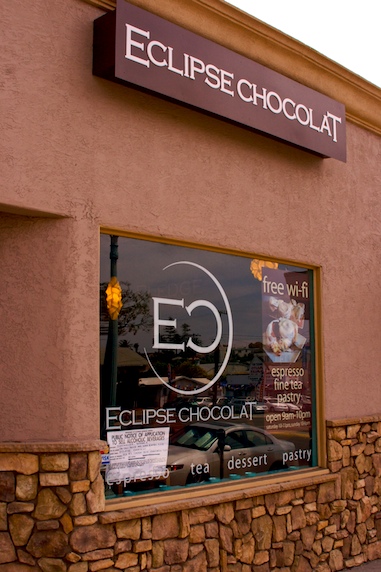 And did I mention they have a very comfortable couch and free wi-fi? These are the things that make me happy in life 🙂