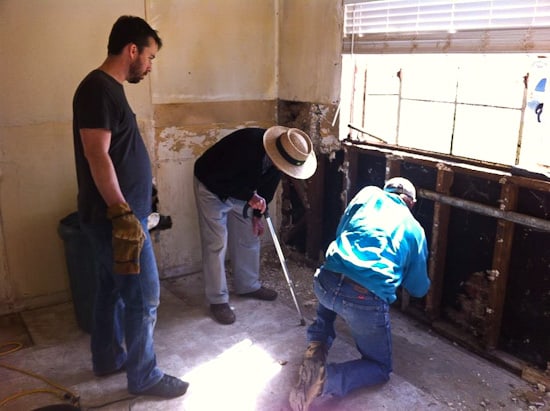 Last night I received a frantic voicemail from our plumber telling me that the brand new gas water heater that we had just relocated 10 feet from its original location in the garage was now making a horrible noise that he’d never heard before and he was afraid to leave it on.  I called him back and he reiterated how horrible the sound was and that he is seriously afraid to even turn it on again.

So, today started with a trip to the new house in Madera to meet my dad and the plumber to try and figure out what’s going on with the water heater.  When my dad arrived, of course the first thing he did was turn on the water heater that the plumber had expressly told me not to turn on.  And sure enough it made a horrible sound that made me cover my ears and jump back.  But instead of turning it off or ducking for cover, my dad jiggled something.  The sound changed.  He jiggled it again and the sound changed again and then stopped completely.  Just as my dad was finishing up “fixing” the water heater, the plumber walked up and yelled, “Don’t turn that on!  It’s dangerous!” or something to that effect.  We explained what had happened and he looked at it for a while and decided that yes, it seemed to be working fine.  So, who knows.

Next, I learned that the heat isn’t working in the house, which is weird because it’s a fairly new system and everything was working fine a few months ago.  Unfortunately, my dad didn’t get results from jigging things this time and we needed to go buy drywall for the kitchen so he didn’t have time to investigate any further than that.  The heating problem will have to be addressed next week.

The paint is looking great inside.  Pretty much everything is now painted except the kitchen and I love it all except for the unfortunate choice I made in the master bathroom.  I’m terrible at choosing paint colors so I’m pretty happy that I only hate one room.  And since the master bathroom is filled with burgundy tile, there really wasn’t a good color choice to be made.  I should have stuck with basic white and that’s what we’ll use to repaint it.  Easy enough.

Outside, the meyer lemons are turning yellow, the camelia is about to bloom, and the pineapple guavas are dropping like crazy.  If you’ve never tasted a pineapple guava, also known as feijoa, you should.  They don’t look like much, but they are delicious!  I’ll have photographs and more information about this new-to-me fruit soon.

One last note, the photo above has nothing much to do with what was happening today, but that’s Phil, my grandpa, and my dad discovering that there wasn’t much between the bricks on the front of my house and the plaster wall in the kitchen.  By not much, I mean nothing.

See you all tomorrow!