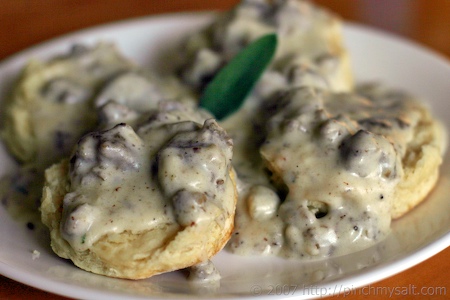 As promised, I will now share my sausage gravy recipe with you. I developed my gravy-making skills fairly late in life because, for whatever reason, we didn’t eat much gravy at home growing up. In fact, the only time I remember eating gravy at all was during Thanksgiving and Christmas dinners. But those weren’t cream gravies. It wasn’t until I got married that I learned anything at all about cream gravies.

I’ve talked a lot lately about comfort foods and to my husband, comfort food means gravy. He loves meals like fried chicken with mashed potatoes, cream gravy and corn. He also like biscuits with sausage and cream gravy. Well, I’ve never fried a chicken in my life so he has to go home for that type of meal, but I’ve learned how to do one thing right: biscuits with sausage gravy.

It’s taken a lot of trial and error to get a good cream gravy. It’s not a difficult thing to do. The problem is that so many cream gravies are really bland. I used to think there was some big secret to getting a great-flavored gravy. The truth is, you just have to add enough salt and pepper. That’s it. That’s the big secret!

You can of course add other seasonings if you wish. I sometimes like to add a little fresh or dried sage when making sausage gravy and I’ve included sage in the recipe below. But the truth is, you can get a really great tasting gravy with salt and pepper as the only additional seasonings and if you aren’t a fan of sage, feel free to leave it out.

I’ve ruined so many batches of gravy trying to find the right seasonings. I’ve tried garlic and onion powders, seasoned salt, worcestershire sauce, you name it, I’ve added it to my gravy. But it always ended up with an odd flavor. And without the extra seasonings, it just tasted bland and doughy.

The problem was that I wasn’t adding enough salt. I used to be pretty timid when it came to adding salt. I’d heard so many times that you can always add extra salt but you can’t take it away! I was so afraid of ruining something by oversalting it that a lot of the things I cooked were just too bland. But I’ve learned that it’s okay to keep adding salt as long as it’s done in small amounts. Just keep tasting and salting. You’ll know when it’s right.

My method of making gravy is a little different than most I’ve read about. Most recipes will have you crumble and cook the sausage in a skillet, take the sausage out, measure the fat, mix in the flour, whisk in the milk and then stir the sausage back in. I can understand the reasoning behind this. Most people think that to avoid lumpy gravy, you need to whisk the milk and flour together. If the sausage is still in there, how can you whisk it effectively?

Well I’ve learned that another way to avoid lumps in your gravy is to simply heat the milk before adding it to the flour. If you do this, you don’t have to whisk anything, regular stirring will be fine. Since I don’t have to worry about whisking, I just mix the flour right into the sausage and then pour the milk in after the flour has cooked for a couple of minutes.

There are two bonuses to this method of gravy making. Since you don’t have to remove the sausage, you don’t have to get any extra dishes dirty. And the second bonus is that by using warm milk your gravy will thicken faster since you won’t have to wait as long for it to come to temperature.

Now I will answer a couple of questions that might come up after you read my recipe.

First question: why do I cook the sausage in extra fat? Isn’t sausage fattening enough already? Well, yes, I suppose it is! But since this is a large batch of gravy and I am using a large amount of flour, I needed to add the extra fat to keep the fat/flour ratio somewhat balanced. I add the oil/butter at the beginning because I think it helps to get the sausage browning faster. But the main purpose is for all that flour to have something to mix into.

Second question: why do I specify using one tablespoon of oil plus one tablespoon of butter in the absence of bacon grease? Well, bacon grease is going to give you the most flavor here. But if you don’t have any lard or bacon grease on hand, butter would be my next choice. The problem is that butter burns easily. Mixing the butter with the oil gives it a higher smoke point meaning you can heat it to a higher temperature before it starts burning.

If you have any other questions about the recipe or want to share some of your own tips about making sausage gravy, please leave a comment!

Edit (9/25/07): I just changed the recipe below to specify whole milk rather than the less descriptive ‘milk’ I had originally suggested.

1. In a medium saucepan, heat milk over very low heat, stirring occasionally. Make sure to keep an eye on the milk, don’t let it boil.

2. Meanwhile, in a large skillet (preferably cast iron), heat the bacon grease (or butter and oil) over medium high heat until melted, then add sausage. Crumble and cook the sausage until well-browned and no longer pink.

3. Sprinkle flour over the sausage and cook, stirring, for a minute or two.

4. Add warm milk all at once and cook, stirring, until thickened and bubbly.

5. Turn heat all the way down, add sage (if desired) and season well with salt and pepper, stirring and tasting frequently until the flavor is to your liking. Turn off the heat. Gravy will continue to thicken as it cools. Serve over warm biscuits.

Hope you enjoy your biscuits and gravy! Now I’m off to start making some healthier foods!

Subscribe to Pinch My Salt by e-mail (what’s this?)