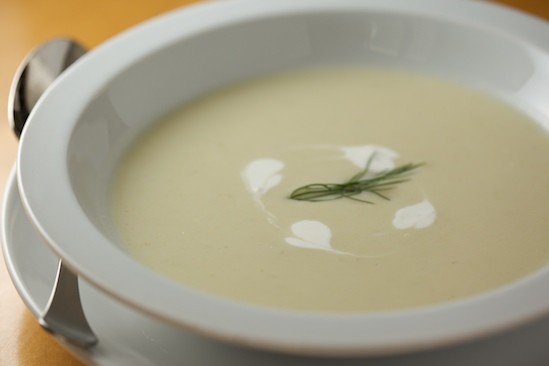 Before living in Sicily, I wouldn’t have been able to tell you what a fennel bulb looks like, much less known what to do with it.  I knew of fennel seed, but had been turned off by its strong licorice flavor after encountering too many links of over-fennelized Italian sausage over the years.  Luckily, four years of eating delicious, well-seasoned salsicce in Sicily cured me of my fear of fennel seed.  But not only that, I was finally introduced to what has now become one of my favorite vegetables: fresh fennel.

Unlike the stronger-flavored fennel seed, the fennel bulb has just a hint of licorice.  In it’s raw form, it’s mild, crunchy, and just slightly sweet. And like other vegetables, the sweetness can be intensified through roasting.  Fennel has become much more common in American kitchens over the last several years, but if you’ve been hesitant about giving it a try, I heartily suggest you try some soon!  Fennel is in season and at its best from autumn through early spring, but you should still be able to find it now.

If you’ve never purchased or eaten fresh fennel, it might be a little intimidating.  Looking at it for the first time, I had no idea which part was supposed to be consumed.  Are you supposed to eat it raw?  If not, how do you cook it?  Well, that’s the great thing about fennel.  The whole thing is edible, from the white bulb to the feathery green fronds.  The bulb is delicious raw, especially in salads, but can also be sauteed, roasted, and even braised.  The green stalks can be chopped and added to stocks, soups and stews.  And the delicate fronds can be chopped and sprinkled over finished dishes, much like you would use any fresh herb.

While my favorite way to eat fennel is raw and thinly sliced in a salad, I recently decided to try using it in a soup.  One of my favorite soups in the world is my mom’s Potato Leek Soup, but with the onset of spring I’ve really been craving something lighter.  I knew I wanted to try a combination of fennel and leeks, but instead of adding potatoes as a thickener, I decided to make use of the head of cauliflower I found hiding in the bottom of my vegetable drawer.

It turned out to be a brilliant decision!  The cauliflower gave the soup some body, but didn’t overpower the delicate flavors of the fennel and leeks.  And since the soup is finished with whole milk rather than heavy cream, the soup has creamy flavor and texture, but still feels light.  It is a simple, delicious, and healthy soup that I think will appeal to kids and adults alike.

1. In a large saucepan, melt butter in olive oil over medium-low heat.  Add onions, celery, leeks, and fennel and cook, stirring occasionally for 10-15 minutes, or until vegetables are softened and just starting to take on a bit of color.

2. Add the chopped cauliflower, the quart of stock, and enough water so that the vegetables are just barely covered with liquid (I added about a cup of water).  Turn up the heat, and bring the soup up to a simmer.  Cover, turn heat to low and let simmer for 30 minutes.

3. Remove pot from heat, and puree soup in the pot with an immersion blender. Alternately, you could puree the soup in batches in a blender or food processor (make sure to let it cool first!) and then return the soup to the pot.

4. Add the milk, and season to taste with salt and white pepper.  Return to low heat and cook until the soup is warmed through, but don’t let it boil.  Serve immediately.

Recipe notes: You can reserve and chop the fennel fronds and use them to garnish the bowls of soup.  This is a very light soup as is, but you can make it even lighter by using milk with a lower fat percentage.  I personally feel that the soup will taste best using whole milk, but feel free to make it according to your own preference.  Alternately, if you want a creamier soup, you can substitute part or all of the milk with half and half or even heavy cream.  I used chicken stock in my soup, but it can easily be made vegetarian by substituting vegetable stock.