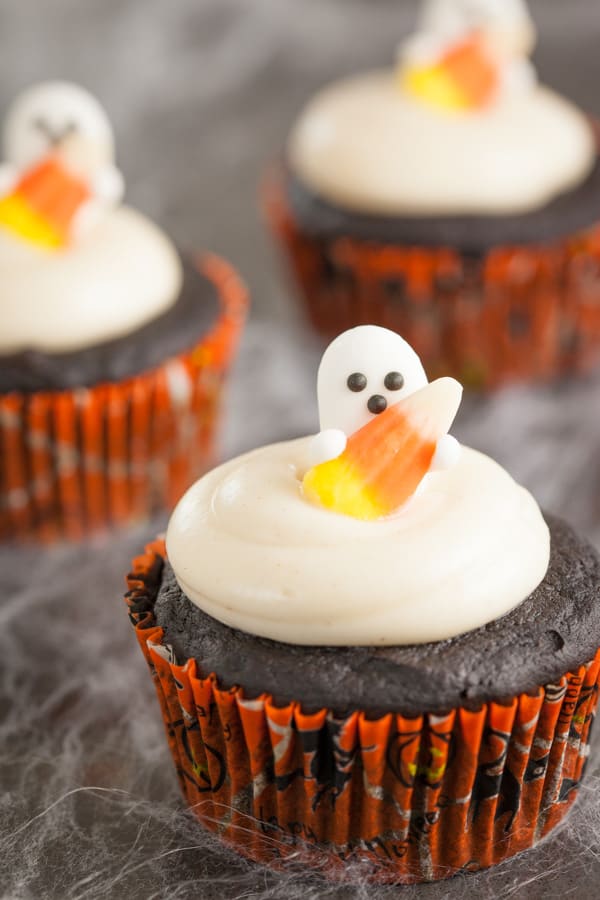 You’d never guess that these easy and decadent double chocolate pumpkin cupcakes contain a whole can of pumpkin. These chocolate chip filled cupcakes are super rich and moist and the spiced cream cheese frosting is the perfect topping. Make sure to take these to your next Halloween party and let everyone try to guess the surprise ingredient.

This is a post from the archives originally published in October 2007. I updated the photos and retested the recipe this week – still delicious!

I picked up the latest copy of Country Living magazine when I was standing in the checkout line at the grocery store. I was starving and fell for the photo of the halloween-themed chocolate cake on the front cover. The magazine promised that it was “Scrumptious!” and “Sooooo moist!” And how could I resist the cute orange frosting and dark chocolate glaze. The truth is that I am very easily swayed by advertising when I’m hungry.

After I got home and ate lunch, I really wasn’t that interested in the magazine anymore. In fact, I kind of forgot about it for a day or two. When I finally got around to thumbing through it, I realized the cake recipe was for a Chocolate Pumpkin Cake. I had never combined chocolate and pumpkin before and I was instantly intrigued.

The problem was that I could feel the pounds piling on just by reading the recipe. A stick and a half of butter… two cups of sugar… 4 eggs… and rich cream cheese frosting. Wow!

Normally I don’t worry too much about trying to lighten up desserts. Desserts are desserts and they’re supposed to be rich and delicious. But I’ve been baking a lot lately and we’ve been eating way too much sugar. I think my body is at it’s limit because the amount of butter and sugar in that recipe was just not that appealing to me.

So, I lightened it up. With the canned pumpkin in the recipe, I knew I could reduce the butter and still end up with a moist cake. I substitute fruit and vegetable purees for fat in my muffins all the time and it works great. So my first recipe ‘fix’ was to increase the pumpkin and decrease the butter a bit.

I decided that the sugar could also be reduced since the frosting would be so sweet. I wasn’t really sure how much to reduce it so I went big and reduced it by half.

The other change I made was to substitute yogurt for buttermilk. I only did this because I happened to have a bunch of plain yogurt in the refrigerator and no buttermilk.

After scratching and scribbling for a while, I finally came up with a recipe that seemed like it would work. When I first tried it, I baked a 9″x13″ sheet cake. It tasted good and was moist and tender, but I felt like I had cut the sugar a bit too much. The recipe has so much cocoa powder that my sugar reduction left the cake just a bit bitter.

The other thought I had when I tasted the first version was that it would be great with some chocolate chips in it. So much for reducing calories!

I also decided I wanted to try it in cupcake form the second time around. By adding a bit more sugar back in the recipe, along with some mini chocolate chips, I ended up with some really great double chocolate pumpkin cupcakes that may or may not be lighter than the original recipe. 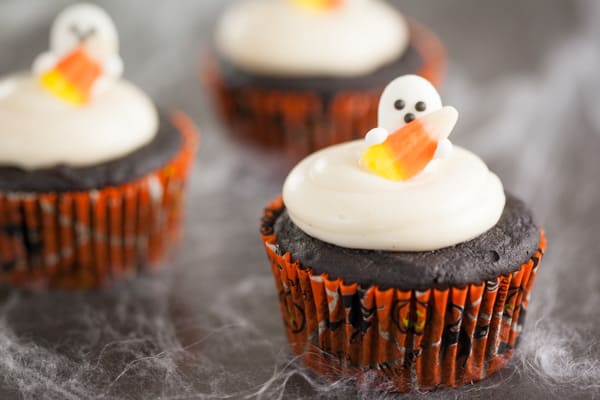 And then came the frosting!

The thing about mixing chocolate with fruit (or vegetable purees) is that the chocolate really covers up all other flavors. If you don’t believe me, try my Double Dark Chocolate Beet Muffins. These chocolate pumpkin cupcakes taste like a rich and moist chocolate cake but there’s just a little something extra.

The spices in the frosting seem to bring out the pumpkin flavor even though the cake itself isn’t spiced. It’s a little hard to explain but trust me, it works! 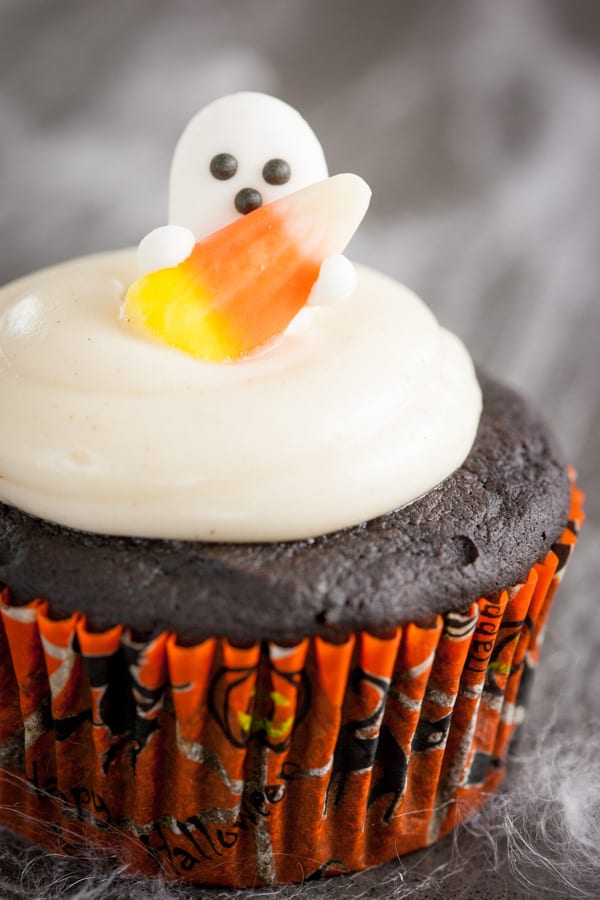 2. Sift the flour, cocoa, baking powder, baking soda and salt together; set aside. In a separate bowl, stir together the yogurt, pumpkin, vinegar, and vanilla extract, set aside.

3. In a large mixing bowl, beat butter and brown sugar with a hand mixer or stand mixer until light and fluffy. Beat in the eggs, one at a time. Alternately beat in the flour and pumpkin mixtures in thirds (for example, beat in 1/3 flour mixture followed by 1/3 pumpkin mixture and repeat until everything is combined). Fold in the mini chocolate chips.

4. Spoon batter into cupcake cups, filling each about 3/4 full. Place cupcake pans in the center of the preheated 350 degree oven and bake approximately 25 minutes. Cupcakes are done when they spring back when lightly touched or a toothpick inserted in the center comes out clean. Cool pans on wire racks for 10 minutes then remove cupcakes from pans and let cool completely on the wire racks.

In a medium bowl, beat together cream cheese and butter until very light and fluffy. Gradually beat in powdered sugar, vanilla, cinnamon, and nutmeg. Once everything is combined, beat on high speed until very light. If frosting is too soft, chill in fridge for 15-20 minutes.