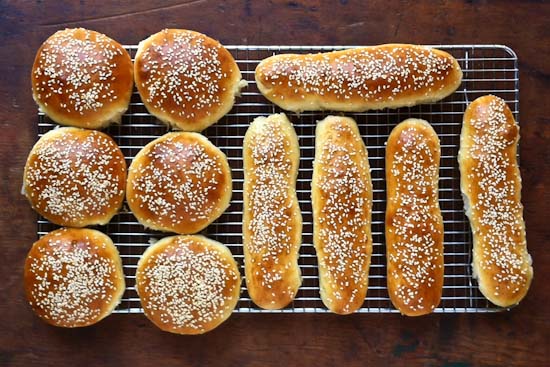 Yesterday I had a craving for grilled hot dogs.  It doesn’t happen often, but when a craving for a childhood treat comes on, sometimes it’s very difficult to shake.  So, yesterday afternoon I decided we would grill hot dogs for dinner.  The problem was that I didn’t want to eat store-bought buns.  I don’t eat bread as often as I used to and if I was going to splurge and eat a hot dog bun (or two), I wanted them to be good ones.  The obvious choice was to make some from scratch, but I only had a few hours and most of the bread I make at home takes much longer than that.  I needed to find a recipe that was both delicious and quick, so I turned to my trustworthy baking friends on Twitter and asked for recommendations.

My friend Bonnie directed me to a recipe for Beautiful Burger Buns from King Arthur Flour.  It was a simple recipe that used a lot of yeast to ensure a quick rise, so it definitely worked within my time frame.  I generally like recipes from King Arthur and this one also came with recommendations from a few other friends who had used it before.  Since I had all the ingredients on hand, I went ahead and tried it.

I was only planning on having hot dogs once this week, so I shaped half the dough into hot dog buns and made the rest into hamburger buns, which can be used this weekend or frozen for another time.  The dough was simple to put together and easy to work with once it was mixed.  I followed the recipe almost exactly as written, although I think I added a couple extra tablespoons of butter, since I just tossed in the remains of my open package of Kerrygold.  I also had to add just a touch more water than the recipe suggested to get a dough that wasn’t too stiff.  The only other change I made was to brush the risen rolls with an egg wash (one egg beaten with 1 teaspoon of water and a pinch of salt) and I baked them at 400 degrees rather than 375 because I wanted buns with a deep golden color.

The hot dog buns were delicious!  This recipe contains more sugar than I would normally put in a batch of buns, and I’ll probably cut it a little bit next time I make them, but the butter, sugar, and salt worked well to give these quick-rising buns a great flavor.  I’d suggest trying the recipe once as written, then adjust the next time if you’d like.

To ensure the buns were all the same size, I used a scale to weigh out 2.5 ounce portions of dough.  The size was perfect for 1/4-pound hamburgers or hot dogs and I ended up with 11 buns.  If you’d like to make bigger buns, you could weigh out larger pieces or just divide the dough into 8 equal pieces as the original recipe suggests.

One of these days, when life slows down and I have more time in the kitchen for recipe development and step-by-step photographs, I’ll share my own hamburger and hot dog bun recipe with detailed shaping instructions.  For now, I’ll be sticking with this quick one, and have no reservations about recommending it to all of you.  Enjoy!

You can find the recipe for these buns here:  Beautiful Burger Buns at King Arthur Flour