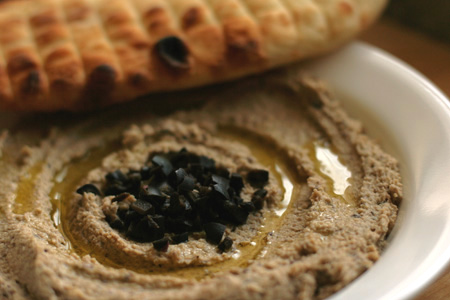 I love olives. I’ve never met an olive I didn’t like except, perhaps, straight from the tree. Whatever you do, don’t eat an olive straight off the tree! But, I love olives.

I grew up in the middle of California, in olive county. Yes, Spain, Italy and Greece may be known for their bold and flavorful olives but if you’ve ever popped open a can of black olives from the supermarket, chances are it came from California!

I’m sure there are olive snobs out there that turn their noses up at the canned variety. It’s true that they are nothing like ‘real’ olives, but canned olives have their place. On American pizza, for instance. Or Nana’s tamale pie. And when you’re a kid, it’s fun to stick them on the ends of all your fingers and then eat them one by one.

But we eat more than canned black olives in California. Growing up, someone was always giving out jars of home-cured green olives. Those were the best! And after I moved to Oregon, my favorite part of the 11-hour drive between my new home and my old home was stopping off in Corning, California at The Olive Pit to sample dozens of varieties of gourmet olives (remember the Olive You refrigerator magnet?).

Canned, brined, oil-cured, salt-cured, marinated, spicy, salty, pimiento-stuffed, garlic stuffed, if it’s an olive, I’ll eat it! I even tried curing my own olives our first year in Sicily. Our first house here came complete with two olive trees in the yard. After some careful internet research and with some lots of meddling, I mean help, from my landlord who spoke not a word of English, I managed to water-cure some green ones and salt-cure some ripe ones.

The truth is that they weren’t nearly as good as any of the olives I can pick up at the markets here so I didn’t bother with it the following year. But it was an experience that I’ll always remember. And I’m sure as the years pass by, my memories will slowly change until someday I’ll remember those home-cured olives as the best I’ve ever tasted.

For the first two years here in Sicily we lived up in a small town on the base of Mount Etna (yes, the same Mount Etna that was recently spitting fire). We lived on the ground floor of a villa that was surrounded by a huge patio, which itself was surrounded by flower beds. We had bougainvillea, jasmine and climbing roses growing along the fences and the beds were filled with a variety of succulents interspersed with a couple olive trees and a big fig tree. We also had a lemon tree poking through the fence from my landlord’s property that supplied us with more than enough fruit each year.

Yes, it was as nice as it sounded.

No, we don’t live there anymore.

Our house was burglarized towards the end of our first year (they took everything and trashed the place) and there were a couple attempted break-ins the following year. There are many wonderful things about living in Sicily, the high crime rate isn’t one of them. It was only a matter of time before the house would be broken into again and we didn’t have the option of moving to another house. The only way to break the 4-year Italian lease was through the military clause that allowed us to move into American military housing. So, reluctantly and with a few tears (on my part), that’s what we did.

I miss our house, I miss the privacy, I miss being near a cute little Sicilian town (we’re pretty isolated here), I miss the olives and figs and lemons. But it’s not so bad. We still live in Sicily! I planted jasmine and bougainvillea in our backyard. We drive past olives and oranges and artichokes every day. I can use American as well as Italian appliances in our house because we have both types of electrical outlets in base housing. I don’t have to lock my front door.

But back to the olives.

My husband doesn’t eat olives. None of them. So when he’s gone, I have a tendency to put olives in everything! He’ll be back soon but this week I’m enjoying my regular snack of hummus with the special addition of Greek olives. I used a combination of green and black olives because I had half a jar of mixed Greek olives in the fridge. But you could use whatever olives you happen to have on hand. Even the canned black ones if that’s what you prefer! 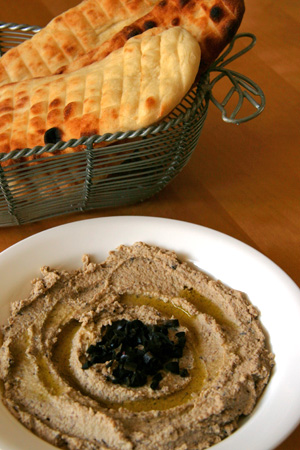 Put all ingredients into a food processor and process until smooth, scraping the bowl down occasionally. The hummus can be thinned with water if necessary. All amounts can and should be adjusted to suit your own taste!

Serve drizzled with a bit of olive oil and a sprinkling of chopped olives, if desired. Serve with pita, crackers, corn chips or it can be used as a sandwich spread.

Did you know that you can subscribe to Pinch My Salt by e-mail? Interested? Read about it here.