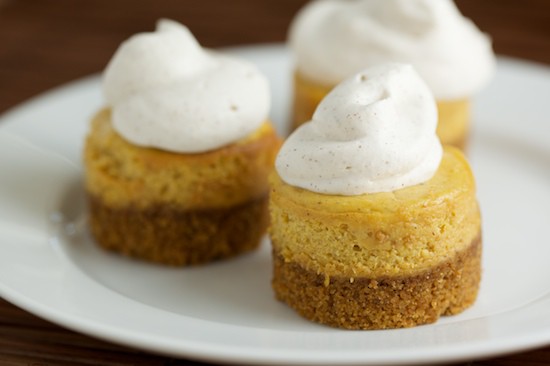 As predicted in my last post, I have another pumpkin recipe for you.  This is the second mini cheesecake recipe on this site and each time I use my mini cheesecake pan, I love it even more.  It’s easy to use, easy to clean and I’ve had perfect results each time.

The best part about baking mini cheesecakes rather than a full-size cake is that you don’t have to worry about slicing it.  I swear I must be the world’s worst dessert slicer.  It doesn’t matter whether it’s pie, cake or cheesecake, the slices always turn out horrible!  Now I’m starting to understand the recent popularity of cupcakes, they look cute and perfect with no slicing involved.

When it came time to serve the cheesecakes, I decided to try adding a little ground cinnamon along with the usual vanilla and powdered sugar, and it turned out to be the perfect topping for these cheesecakes.  It will also be my new favorite topping for any pumpkin or apple pie from now on!

If you’ve never seen a mini cheesecake pan before, this is what it looks like.  The bottom of each well is covered with a removable disk that can be pushed up through the hole in the bottom.  This makes the cheesecakes easy to remove once they are baked. 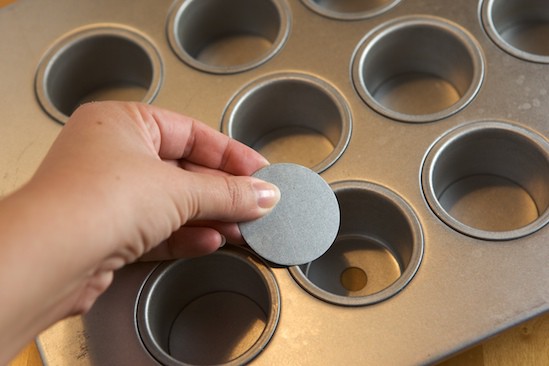 Making the cheesecakes is simple.  Mix up the graham cracker crust ingredients and divide the crumbs evenly between the cups. 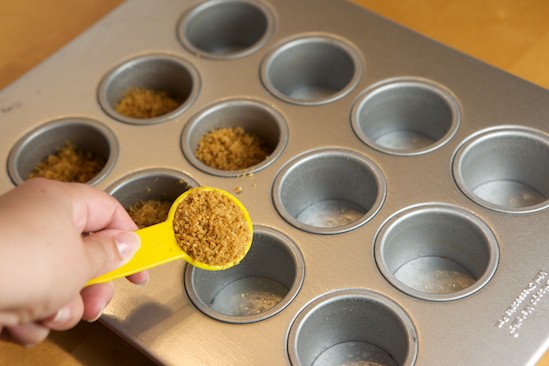 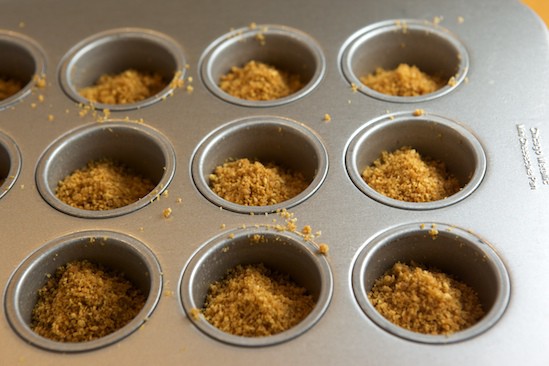 To press the crumbs in to form the crust, I like to use the bottom of a tablespoon.  But you can also just press them in with your fingertips. 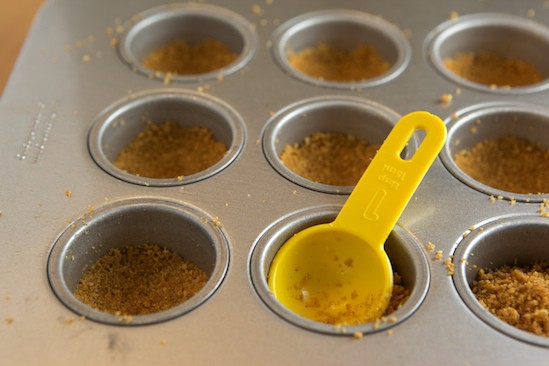 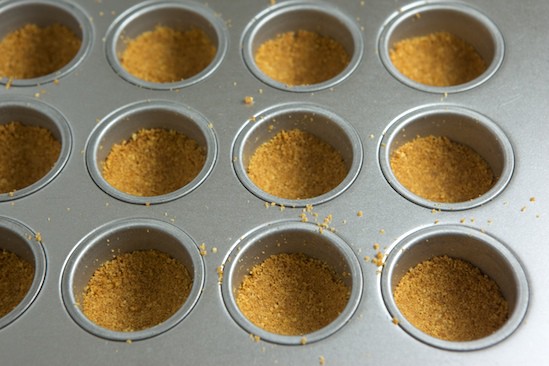 Next, mix up the filling ingredients and divide the batter between the cups.  I use a cookie scoop. 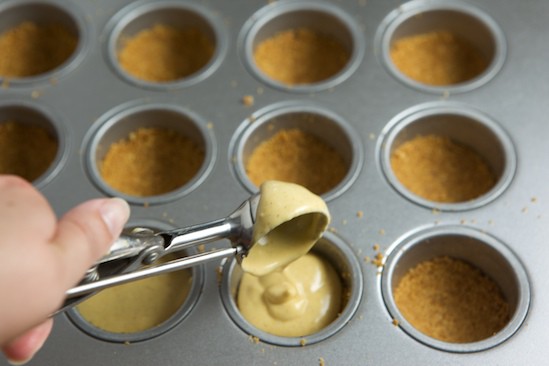 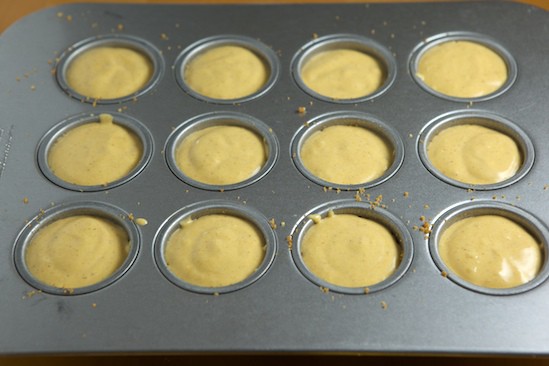 Bake the cheesecakes in a 375 degree oven for about 14 minutes.  They shouldn’t crack like this, but for some reason mine did today.  Oooops!   If it happens to you, don’t panic!  They’ll look better after they cool. 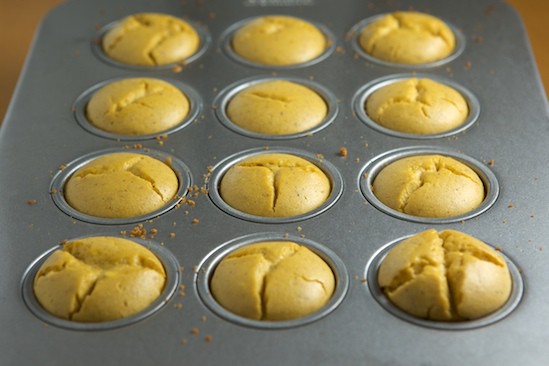 See?  Just let them cool in the pan for about 20 minutes and they will shrink down and the cracks won’t be as noticeable.  When you’re ready to remove them, just push your finger up through the bottom, or use the handle of a wooden spoon.  The cheesecakes should pop right out. 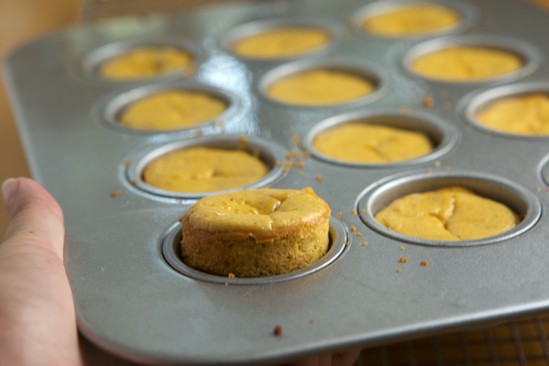 Let them cool completely on a wire rack then refrigerate until ready to serve. 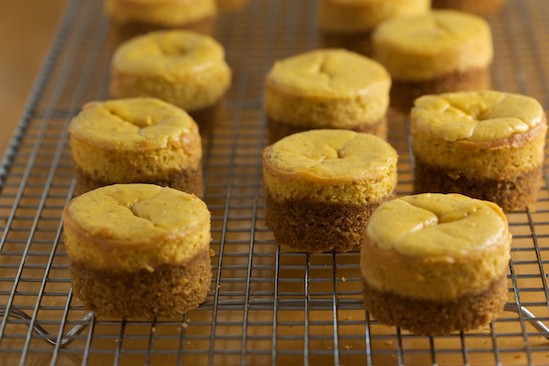 Just before serving, whip up some cinnamon cream and add a dollop to the top of each cheesecake. 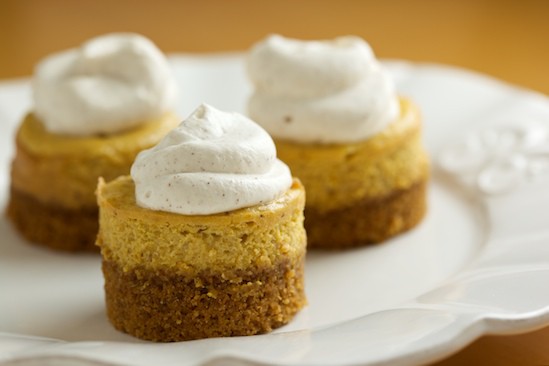 1. Preheat oven to 375 degrees, lightly grease the insides of the mini cheesecake pan (I use cooking spray).

2. In a medium bowl, mix crust ingredients until well combined. Divide mixture evenly between the 12 cups. Press crumbs firmly on bottom and 1/3 up sides of each cup using your fingertips or the bottom of a tablespoon. Set aside.

3. In a separate medium bowl, blend filling ingredients together until smooth. Spoon this mixture into each crust-lined cup, dividing evenly between all 12.

4. Place cheesecake pan into the preheated oven and bake for 14 minutes. Remove from oven and place on rack to cool for 20 minutes. Carefully remove cheesecakes from pan by pressing up from the bottom of each cup. Let cheesecakes cool completely on wire rack then refrigerate until ready to serve.

5. Just before serving, combine the cream, sugar, vanilla and cinnamon and whip until soft peaks form. Serve the cheesecakes topped with the cinnamon whipped cream.

You can change up the amount and type of spices in this recipe to suit your own taste. If you have pumpkin pie spice on hand, you can just use that to replace all of the other spices. If you want to experiment with the spices but don't like the idea of tasting the batter with raw egg, blend together everything except the egg and keep adding spices and tasting until you get the flavor you want. Then add the egg and continue with the recipe.

Special kitchen equipment used for this recipe:
The following are Amazon Affiliate links