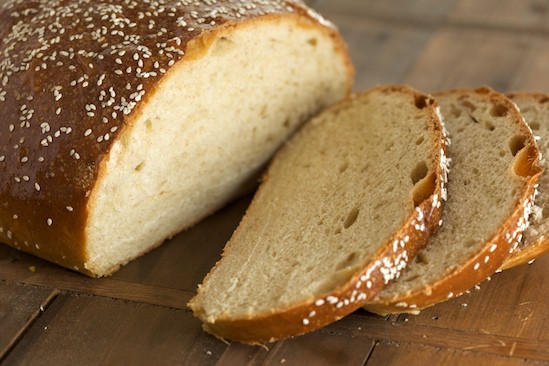 Week two of The Bread Baker’s Apprentice Challenge has come to an end, and I can now say that I have made my very first Greek Celebration Bread!  While these breads would normally be baked and consumed during religious holidays such as Christmas and Easter, I see no reason why it can’t be made for Memorial Day!

In fact, this bread was so delicious, I’m thinking it might have to be made for Labor Day, too!

Artos is the general name for Greek Celebration Breads, but there are several variations, each with their own flavors, colors and names.  In The Bread Baker’s Apprentice, Peter Reinhart gives us a basic formula for Artos and then we have the option of adding certain dried fruit and nuts to create either Christopsomos (a Christmas bread) or Lambropsomo (an Easter bread).  There are certainly may other variations of Artos, but those were our only choices in the book.

In addition to the extra ingredients, the Christopsomos and Lambropsomo also require special shaping and the resulting loaves are absolutely beautiful.  Lambropsomo might even have special red-dyed eggs nestled within it’s braid.  Several members of the BBA Challenge created the special holiday loaves, but  I opted to take the easy route and made a basic round Artos without any dried fruit or nuts.

But there was nothing ordinary about this bread!

I was so excited when I learned I could use one of my sourdough starters in this bread!  I’ve never used a sourdough starter (or barm, as it is called in this formula) in an enriched bread dough.  My sourdough breads are always very basic: flour, water, starter and salt.  I was excited to see what kind of flavor it would impart to the sweet and spicy Artos dough.

And in anticipation of baking with my starters again, I finally decided to name them!  Meet Lyle.  Lyle is the sourdough starter I created here in San Diego and he’s been active for about a year now.  I’ll introduce my other two starters when they make appearances in other loaves throughout this challenge.  But today, Lyle (named after Lyle Lovett) is the star(ter) of the show! 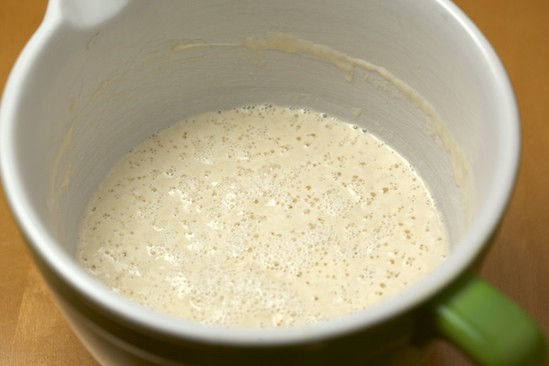 I took Lyle out of the fridge and started him on a feeding regimen a few days before I baked my Artos.  I needed to get him up to 100% hydration, which means he’s fed equal parts of water and flour (by weight).  As you can see by all the bubbles, he was pretty excited to get started!

I measured out all of the Artos ingredients.  In one bowl,  I combined the dry ingredients: unbleached all-purpose flour, spices, salt, and some instant yeast. 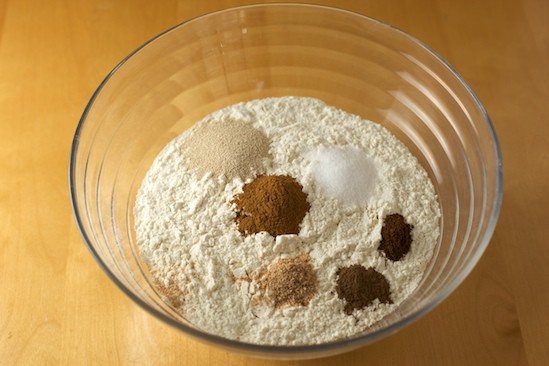 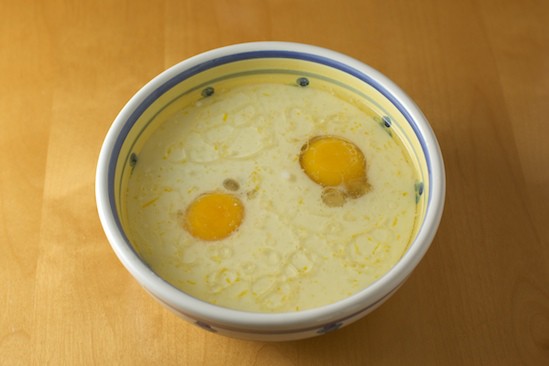 And finally I measured out 7 ounces of Lyle, my sourdough starter. 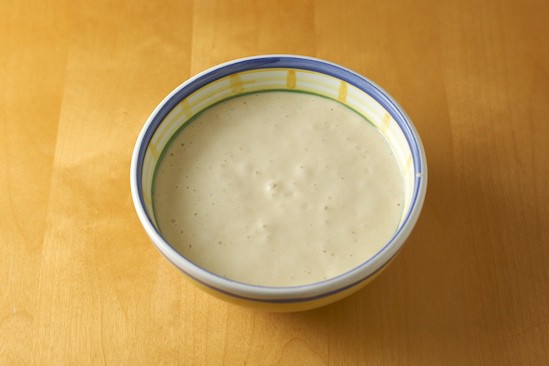 Now that I had dirtied three extra bowls, I poured everything into a larger mixing bowl.  Yes, I do tend to make a huge mess in the kitchen! 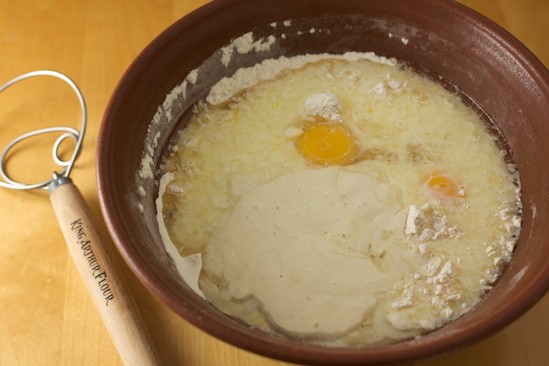 Since I opted to do this loaf by hand, I mixed everything together with my trusty dough whisk.  It really does a great job! 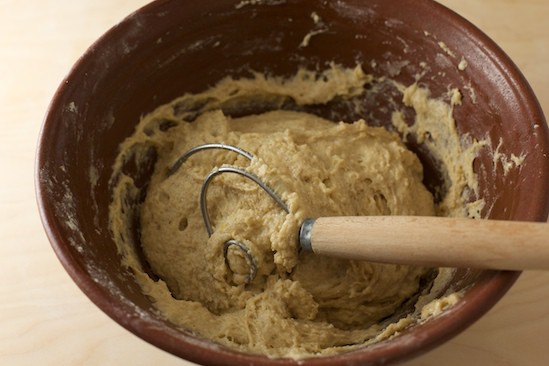 Then, using a flexible bowl scraper (one of my other favorite tools), I scraped the dough out onto my well-floured pastry board.  Just like the Anadama bread, this dough was fairly wet and I knew I would end up kneading in some extra flour. 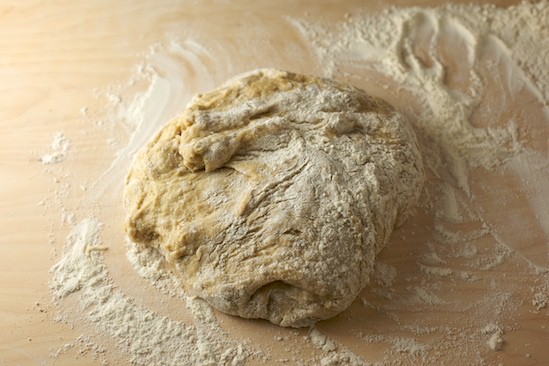 I kneaded the dough for a little over ten minutes until it reached the point where it seemed tacky, but not sticky.  To check if the gluten had developed enough, I used the windowpane test (also called membrane test).  This is not an easy thing to photograph, so I was lucky to have my friend Amanda here to help me out! 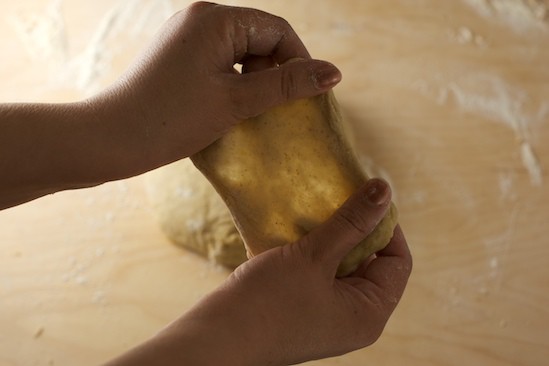 To tell you the truth, the dough probably could have used another couple minutes of kneading, but my lower back was aching a bit since I’m out of practice.  So, let’s just consider this dough well kneaded! 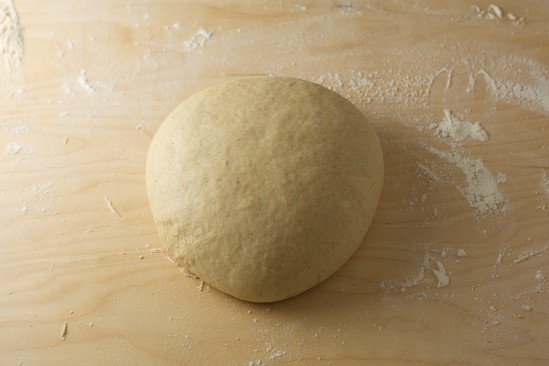 The next step was to place my ‘well-kneaded’ dough into an oiled bowl.  I turned it to coat the entire surface with oil and covered the bowl with greased plastic wrap (to grease plastic wrap, just spray it with your favorite cooking spray or spray oil). 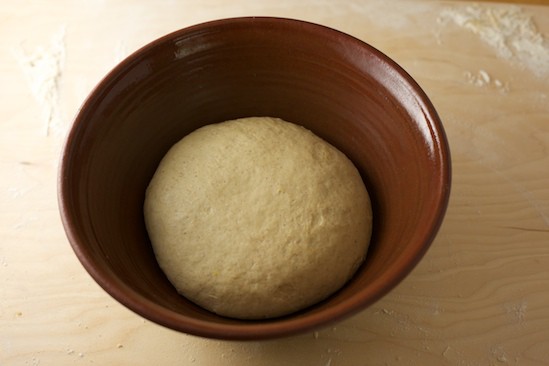 Unfortunately, I forgot to take photos of the dough after it had doubled in size.  But trust me, it had.  It took about an hour and a half.  And this time, instead of deflating it completely, I just gently deflated the large bubbles before shaping it into a round loaf (a.k.a. boule).  I placed the boule on a sheet pan lined with a Silpat.  Parchment would have worked fine, but I have a Silpat, so might as well use it and avoid waste! 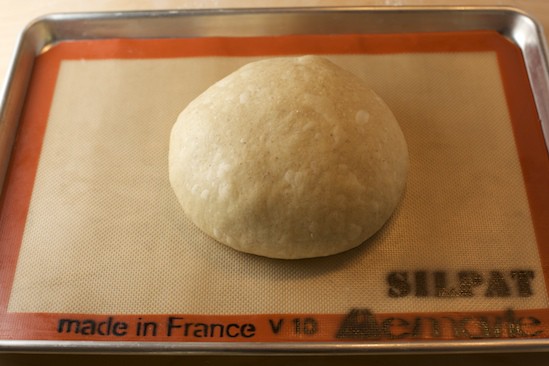 Again, I covered the dough with greased plastic wrap.  If you save the piece you used to cover the bowl, then you won’t have to spray a new piece with oil!  Just make sure it’s greased well so that it doesn’t stick to your bread dough.  Spraying plastic wrap with cooking spray can be a little awkward, but it’s simple once you get the hang of it.  I lay the piece over my arm, letting it hang down and spray away!  Since I never remember to do it over the sink, the cooking spray then gets all over my kitchen floor.  That’s when my little Boston Terrier runs in and licks the entire floor for about ten minutes.  Don’t ask me why, but he LOVES spray oil, even Baker’s Joy with the flour in it.  He’s learned to listen for the sound of the can and he comes running before I’m even in mid-spray.  I suppose it’s a good thing that he cleans it up for me because a kitchen floor covered with cooking spray is just an accident waiting to happen. 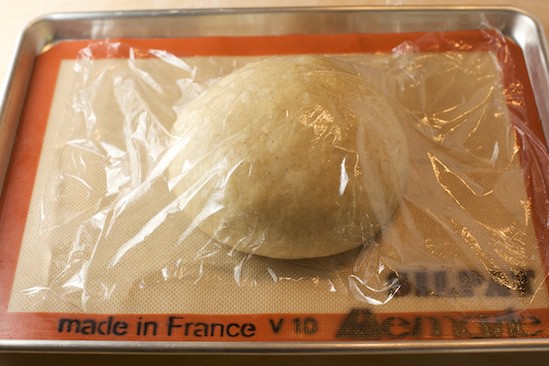 After about an hour of proofing, the loaf was definitely bigger.  Now I wouldn’t say that it had doubled, but remember how I over-proofed my Anadama? I was determined not to do that again!  So, I decided it had risen enough and put it in the oven.  After hearing accounts from other BBA’ers about monster loaves growing out of control in the oven, I had a feeling I wouldn’t end up with a wimpy loaf! 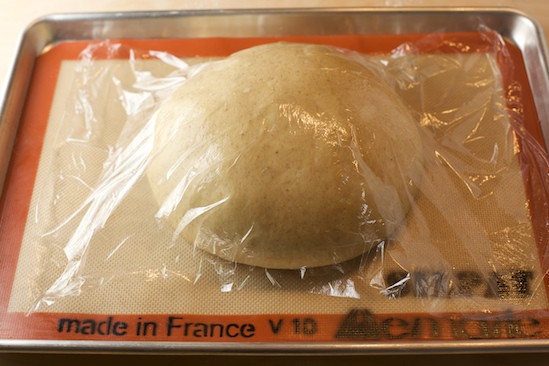 Sure enough, this Artos had a nicer oven spring than my Anadama.  It was big and beautiful!  And it was certainly one of the best-smelling loaves I’ve ever had the pleasure of sniffing! 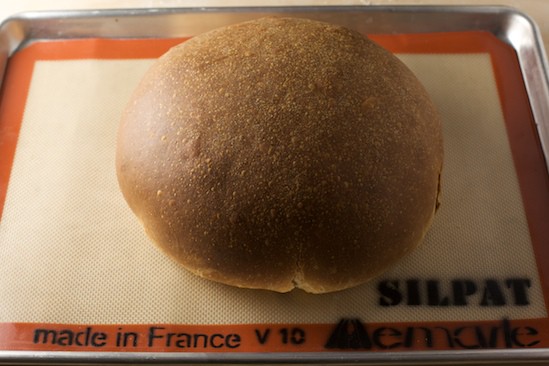 After brushing it with a honey lemon glaze and sprinkling with sesame seeds, my Artos certainly looked like a loaf worthy of a Greek Celebration! 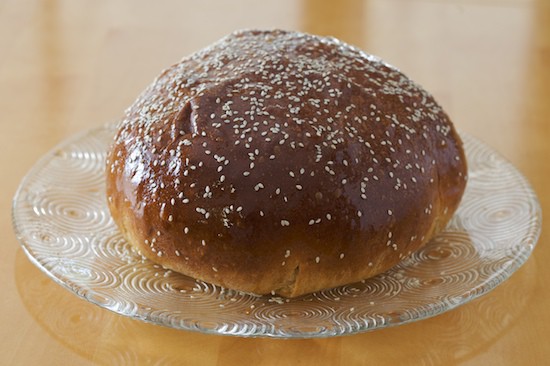 I didn’t slice it until the following day when I had the opportunity to share the loaf with some friends.  Kristin, Caron and Amanda all agreed with me, this bread was delicious!

And yesterday, when the bread was getting a bit stale, I decided to turn it into French Toast.  Since the bread itself was flavored with spices, I used the most basic of french toast batters.  I ate it with a bit of butter and a drizzle of honey.  Perfect Sunday Brunch! 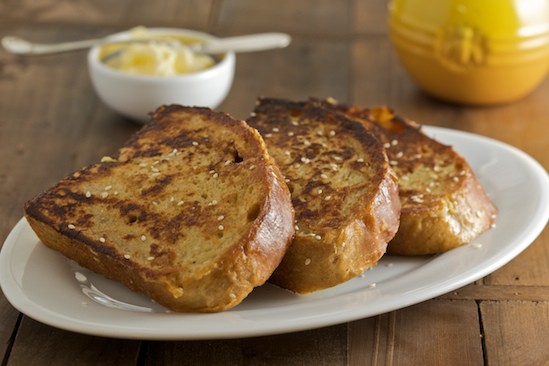 For those of you who are participating in the BBA Challenge, how did you like the Artos?  Which variation did you make? Did you use a barm or a poolish?  Did you learn anything new while baking this particular bread?  And remember, if you wrote a blog post about Artos or have photos available online, please leave a comment and share your link!

This week we will be making Bagels! The instructions begin on page 115 of The Bread Baker’s Apprentice.  You will need to allow two days to complete the bagels as they require an overnight refrigeration.  You’ll need high-gluten or bread flour for this recipe and the only ingredient that might be hard to find is malt powder.  Luckily, Mr. Reinhart suggests alternative ingredients in case you can’t locate any malt powder.  Good luck and happy baking!

Greek Celebration Breads from other BBA’ers: