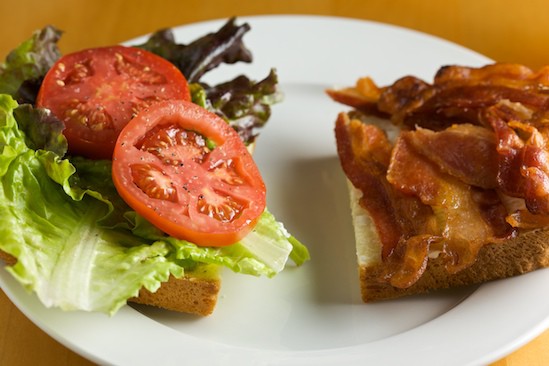 Actually, it’s twitter that brings the world closer together.  And it’s because of twitter that I got invited to eat bacon, lettuce and tomato sandwiches with friends from around the world today.  Virtually, of course.

It all started with a conversation about bacon between Cheryl in New York and Ellise in Paris.  Cheryl had bacon, but no lettuce and tomato.  Ellise had lettuce and tomato, but no bacon.  They joked about getting together for a BLT lunch.  Never one to miss out on a conversation about bacon, I chimed in that I had all the fixings for a BLT and had already planned on making one soon.  Next thing I knew, I had been invited to the virtual BLT Lunch on twitter!

Within a matter of minutes, there were others!  Karen from Atlanta had some fresh-baked rye bread she thought would be perfect.  Kim from South Carolina promised to show up with a Fried Green Tomato BLT.  Cathy in California wanted to introduce us to her BLTea featuring her Smoky Tea Tomato Preserves.  You see, bacon really does bring people together.

So are you wondering how on earch we could all meet for lunch on twitter?  Simple, really.  We all made our favorite version of a BLT (bacon, lettuce and tomato sandwich) at some point during the week, and photographed it.  Today, everyone is sharing links to photos and blog posts via twitter.  We’re using the tag #BLTLunch to make it easy to find each other.  It might not be the same thing as getting together in real life, but it’s a whole lot of fun nonetheless!

So it turns out that my contribution to the BLT lunch was actually last night’s dinner.  My cousin Corinne, her husband Jason, and best friend Janet are all staying at my house for a few days, so of course they had to be included in the BLT action!  They are in town for Comic-Con, so I had to do something special to lure them back to the house to eat sandwiches for dinner.  Homemade bread (of course) did the trick!

I wasn’t sure which type of bread I should bake, but I wanted it to be something new and something that I wouldn’t be baking as part of the BBA Challenge.  I finally decided on Sheepherder’s Bread, because I have been fascinated by a recipe I had seen in one of my cookbooks recently.  It’s just a basic white bread, but it’s a huge loaf that is baked in a big cast iron dutch oven.  The part that fascinated me was the instruction to let the bread rise until it actually pushed up the lid of the pot by 1/2 inch.  Then, the bread goes into the oven with the heavy lid still on the top, although the lid gets removed partway through baking to allow the top to brown.  Interesting. 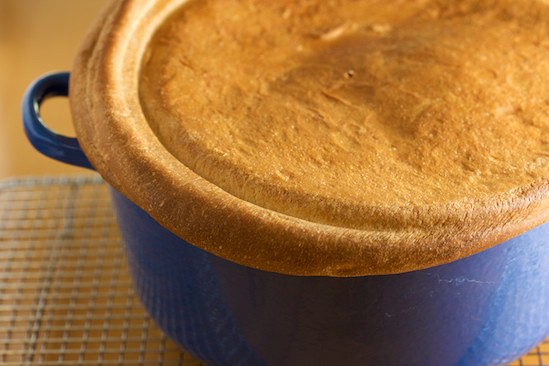 I accidentally let the bread rise too long, and instead of pushing the lid up half an inch, it kind of spilled out the side a bit.  I should have paid more attention to the part in the recipe that told me to watch it closely.  But, it still worked!  Since it proofed too long, the top wasn’t domed, but it was still a successful loaf.

And did I mention that it was big? 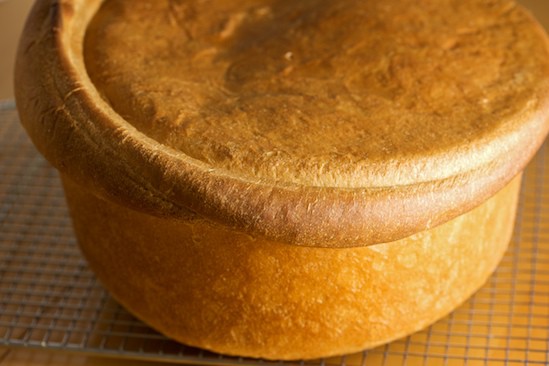 The only real problem I had was trying to figure out how to slice this thing to turn it into sandwich bread! 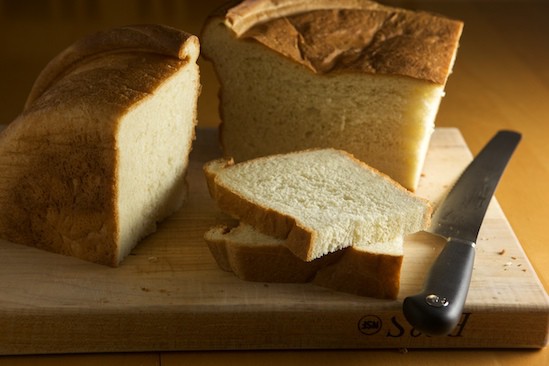 I guess the homemade bread trick worked since the gang made it back in time for dinner. They even stopped by Whole Foods and picked up some gorgeous tomatoes on the way home! 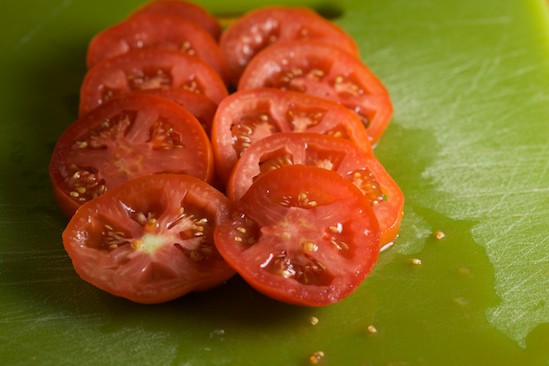 And now for the sandwiches!

First up is Janet, who made a BLT lettuce wrap since she can’t eat gluten: 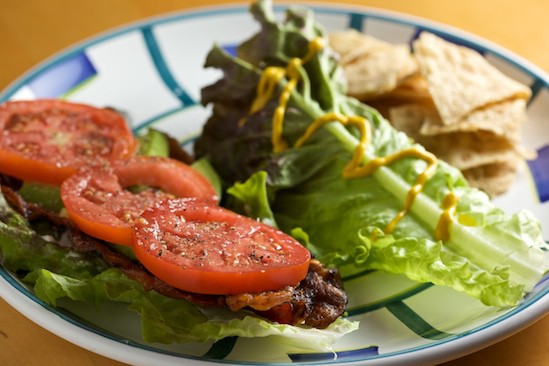 You can’t see it, but Janet included avocado in her wrap (I think it’s hiding under the bacon).  Looks good, although I’m not sure how I feel about the mustard…

Next up is Corinne’s BLT.  She used bread, but much to my dismay opted for a non-toasted version (I always toast the bread!) 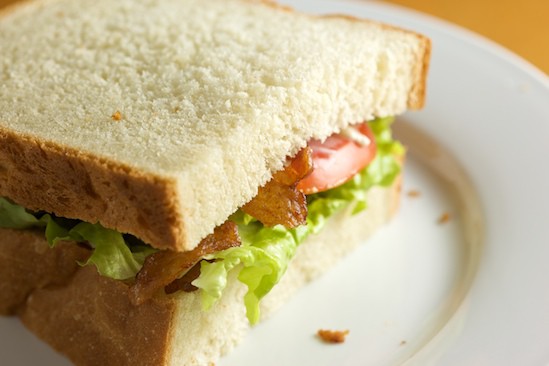 Corinne also hid some avocado in there!  Now this sandwich is a bit deceiving since it looks like there are only two strips of bacon, but she actually hid an extra layer of bacon on the bottom! 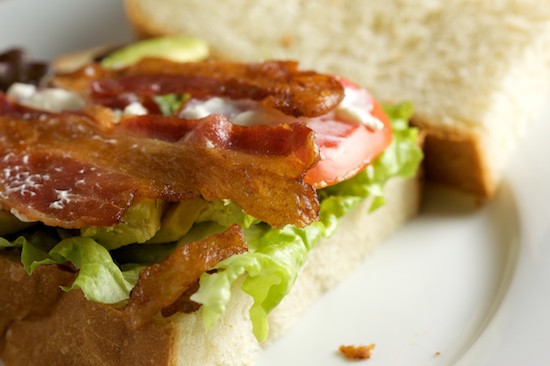 And now for Jason’s sandwich.  Again, untoasted bread!  And no tomato??  But I have to give him points for using extra bacon. 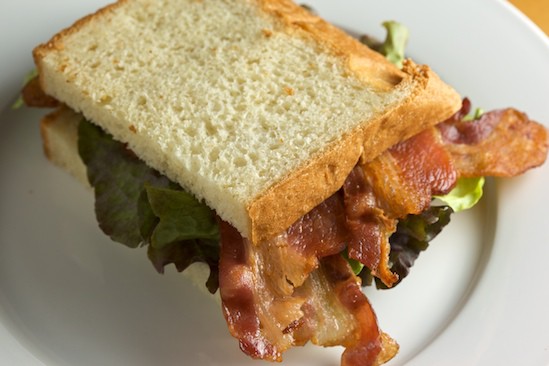 And here’s mine.  I opted for my classic BLT: toasted bread, mayo, bacon, lettuce and tomato. 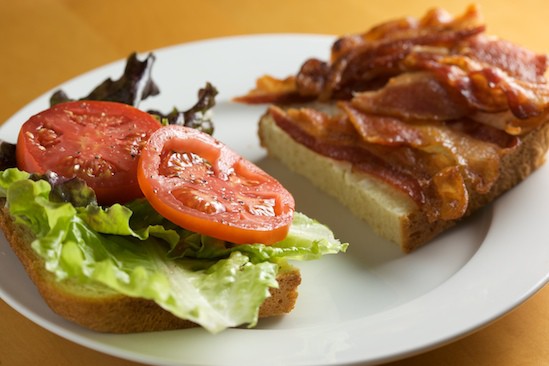 And it was delicious! 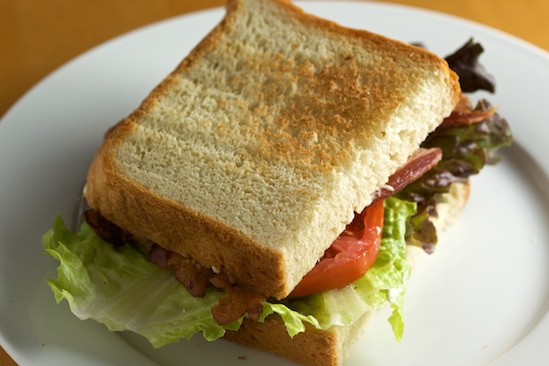 We all enjoyed our BLT dinner and I can’t wait to see what everyone on twitter brings to today’s BLT Lunch!

Here are a few that I’ve already seen:

So, are you following me on twitter?  And if twitter isn’t your thing, you can also find Pinch My Salt on Facebook now!  Lots of things I create in my kitchen never make it to this site, but you’ll find me talking about it all on twitter and Facebook, including lots of photos.  Hope to see you there!