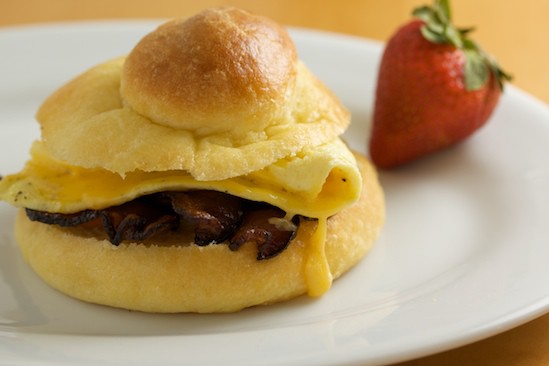 I really can’t believe I’ve already made it through week four of The Bread Baker’s Apprentice Challenge! The fourth bread we tackled from the book is brioche.  Yes, buttery and delicious brioche.  Although I love to eat the stuff, I had never before baked brioche at home so I was really looking forward to this one!

My original plan was to try at least two different ‘classes’ of the brioche so that I could compare the results.  But it seems like time has just not been on my side when it comes to baking lately.  And since I’m the only one home these days, I really couldn’t justify baking that much brioche in one week.  It was really hard to decide which one to try, but at the last minute I said what the hell and jumped in with a full pound of unsalted European-style butter.

And I created the richest, butteriest brioche I’ve ever tasted. 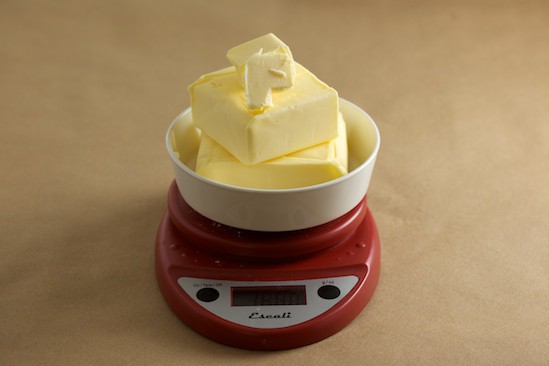 Like the other breads we’ve made so far, the Rich Man’s Brioche starts with a sponge.  I whisked together a bit of flour, yeast, and some lukewarm milk. 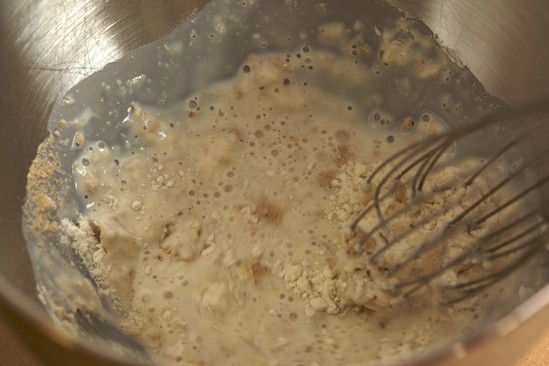 After it’s mixed together, the sponge was given some time to ferment. 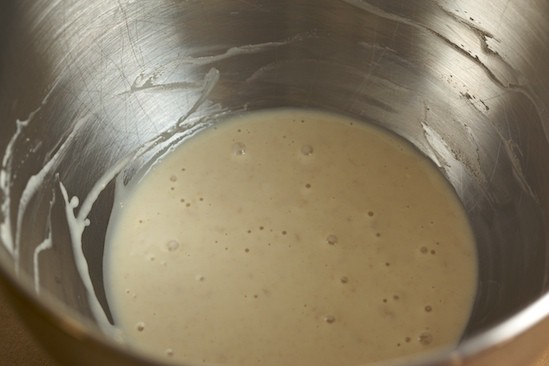 This sponge grew quickly, and had doubled in about half an hour. 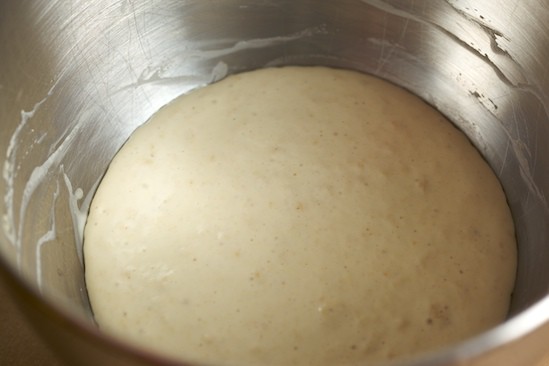 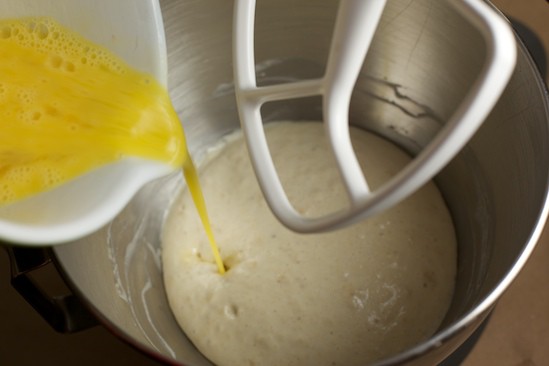 The eggs needed to be blended into the sponge before adding the extra flour. 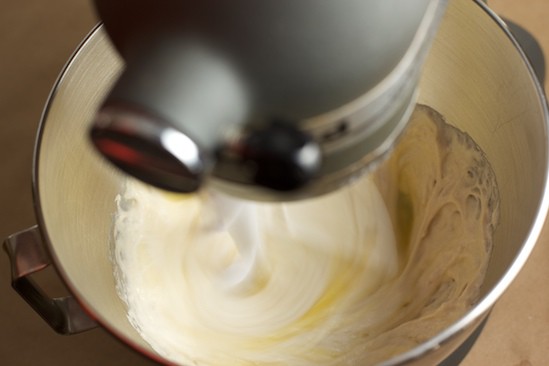 Next I added the mixture of flour, sugar and salt. 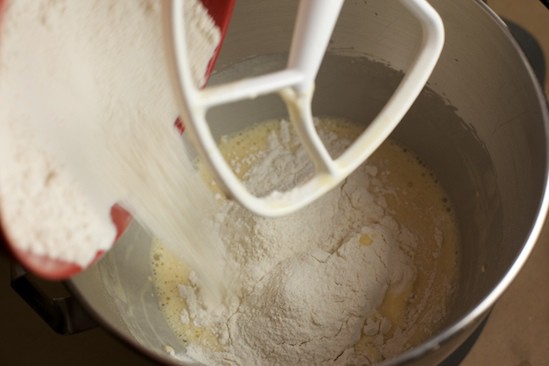 And once again, let the mixer do it’s work.  I must say it was nice to have a week off from kneading after those bagels last week! 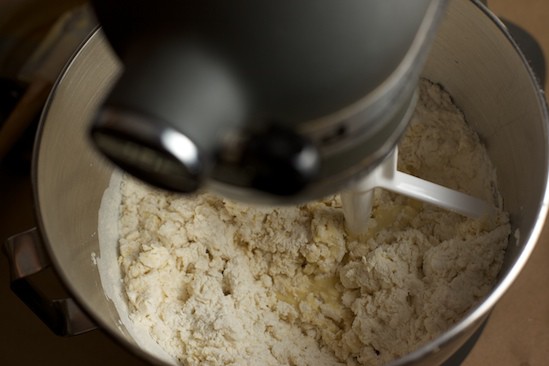 Once the flour was completely incorporated, I was left with an extremely sticky dough!  I followed Mr. Reinhart’s instructions and let the dough rest for five minutes to develop the gluten before adding the fat. 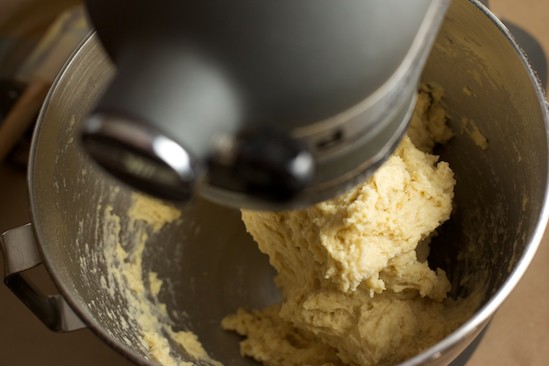 And then I started adding the butter.  The butter needs to be at room temperature so that it’s easy to blend in.  Even though my butter had been sitting out for hours, it still wasn’t as soft as I would have liked.  Next time I’ll leave it out overnight. 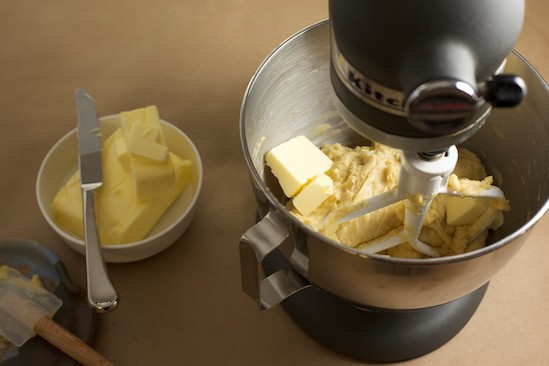 As I continued adding butter and mixing, I found that I had to switch to the dough hook on my Kitchen Aid mixer after the dough repeatedly climbed the paddle while mixing.  It was harder to mix the butter in while using the dough hook, but still much easier than trying to do it all by hand! 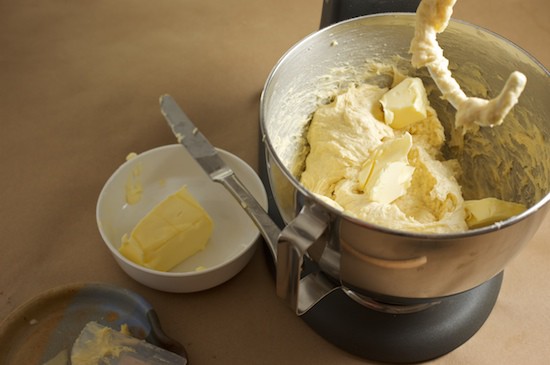 After the butter was all incorporated, I continued kneading the dough with the dough hook until it was smooth and satiny.  I’ve never worked with a dough like this…it was gorgeous!  Kind of looks like frosting, doesn’t it?  And yes, I tasted it (didn’t taste like frosing). 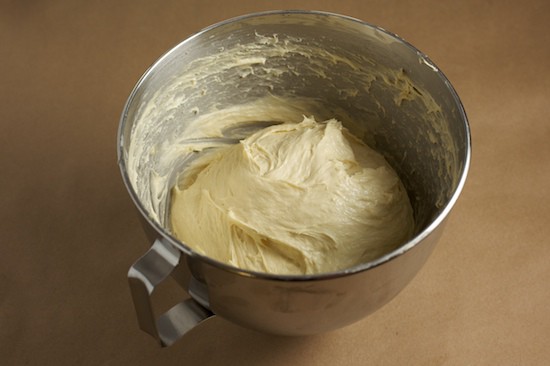 Next I lined a baking sheet with parchment, misted it with oil, and scraped out my blob of butter, er, brioche dough. 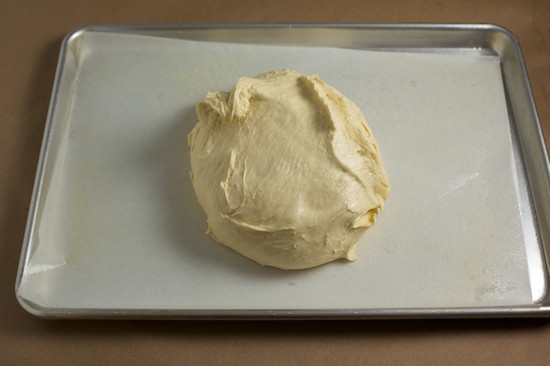 Next I pushed it out into a rectangle before covering it with greased plastic wrap and putting it in the fridge for an overnight rest. 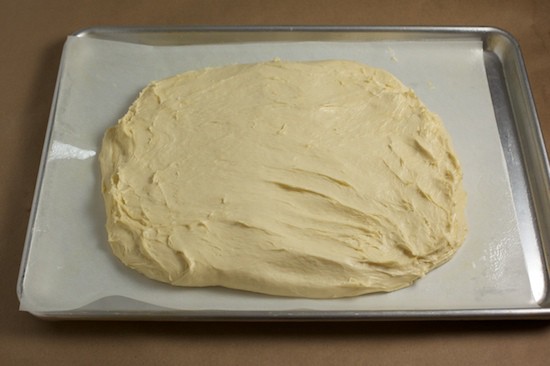 Since I don’t have any brioche molds, I decided to make brioche rolls like the ones I used to eat in Sicily.  They have the little top knot, like the French petite brioche à tête, but are baked on a sheet instead of in the little fluted molds.

I decided to divide the dough into three-ounce pieces for my rolls. 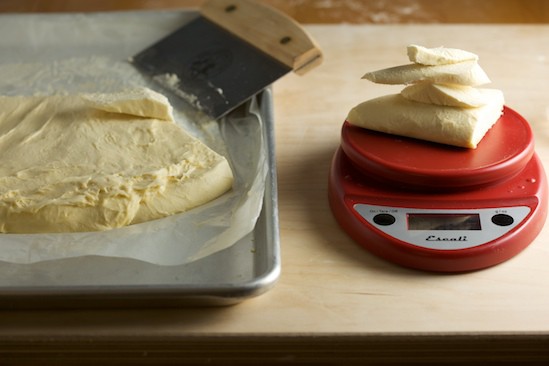 And I shaped them using instructions found both in the book and this great video tutorial. I did my best to photograph the shaping technique, but the video will probably be more helpful. 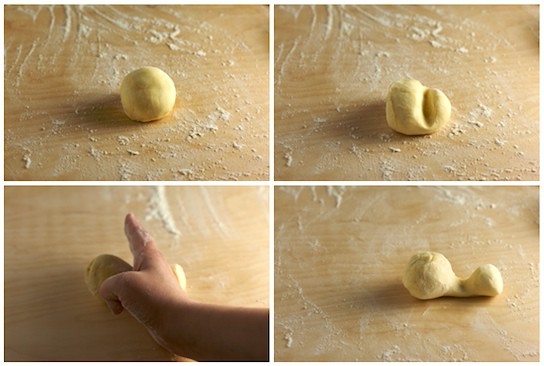 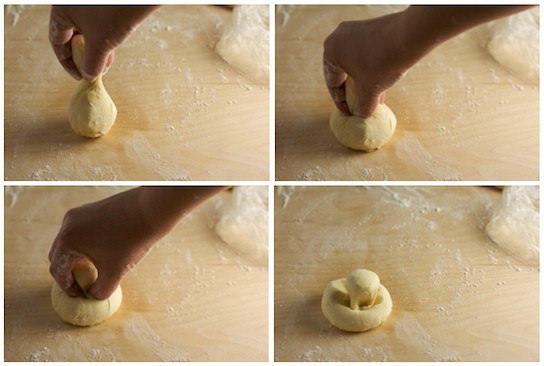 After shaping the petites brioches à tête, I covered them with greased plastic wrap and let them proof at room temperature.  Unfortunately, I think I let them proof too long (yep, did it again).  I say this in hindsight because they didn’t really have much oven spring.  But here they are, after proofing for almost 2 hours (an hour and a half would have been better): 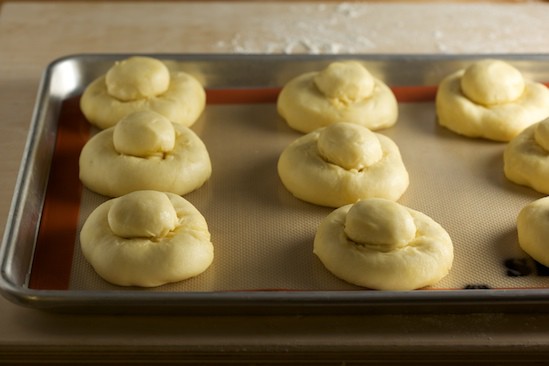 Before putting them in the oven, I brushed them lightly with an egg wash.  They were so soft and puffy that it was hard not to damage them with the pastry brush.  I switched to the silicone brush halfway through because it was a bit more gentle than the natural bristle brush I started with.

Finally they went into a 400-degree oven and baked until they were a beautiful and golden brown. 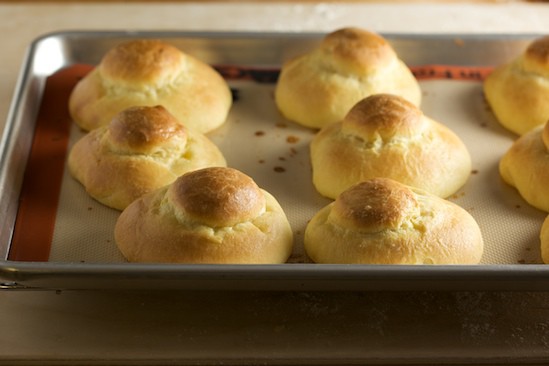 I tried one while still slightly warm from the oven with a spoonful of raspberry jam.  It was SO delicious!  But these were by far the richest brioche I’ve ever tasted.  They were so rich, it was actually difficult to finish an entire roll in one sitting, and I rarely have such problems!

The next morning, I decided to make myself one of my favorite Sicilian breakfasts: granita and brioche! I had never made granita before, but I managed to create a slushy strawberry granita that reminded me a lot of what I used to eat in Catania.  The granita in Catania is very slushy, not as grainy as most of the recipes I’ve seen here.  So I processed my granita in an ice cream maker instead of using the ‘fork technique’ that I always read about.  It was perfect and ready to eat after less than ten minutes in the ice cream maker.  But I’ll write more about the granita in a different post.

All you need to know is that this is how I ate my breakfast yesterday: 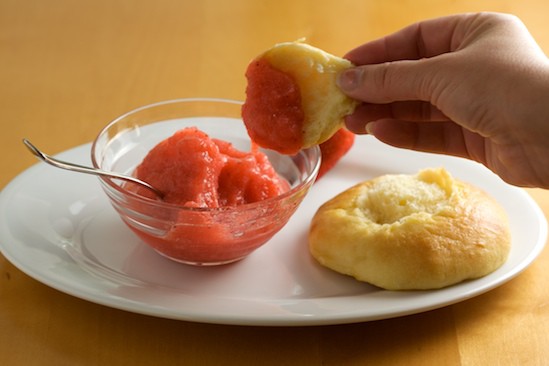 Want another breakfast idea for these brioche rolls?  How about a Bacon, Egg and Cheese Sandwich?  Ok, I admit that this was overkill since the brioche was already too rich.  But it was SO GOOD!  Next time I make brioche, I’ll do the Poor Man’s Version so that I can eat my breakfast sandwiches with a little less guilt. 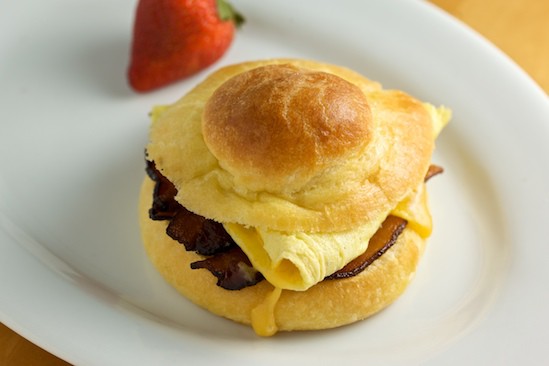 And what I haven’t told you yet is that I also made this delicious Cinnamon Swirl Loaf from a portion of the brioche dough.  The recipe yields almost three pounds of dough, so I was able to make one Cinnamon Swirl Loaf in addition to all those mini brioches. 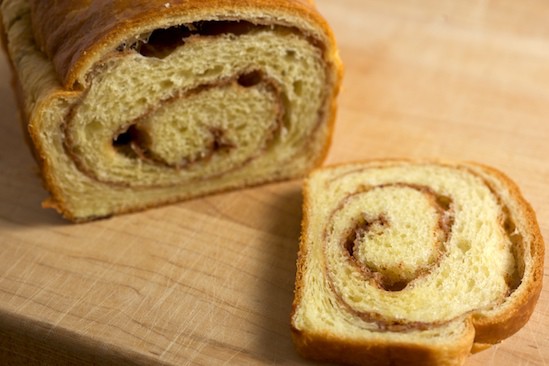 If you want to know how made the Cinnamon Swirl Loaf,  feel free to check out the step-by-step photos on Flickr.

Overall, I’m glad that I tried the Rich Man’s Brioche.  It was a beautiful dough and the end result was delicious.  But I really don’t think I’ll ever make this version again.  It’s just too much.  I can see myself saving even the Middle Class Brioche for special occasions, and baking the Poor Man’s version for hamburger buns and breakfast brioche.

Now on to another type of brioche for next week…Casatiello!  And this next one is filled not only with butter, but salami and cheese, too!  (my poor, poor arteries)

This week we will be making Casatiello.  Peter Reinhart describes it as “…a rich, dreamy Italian elaboration of brioche, loaded with flavor bursts in the form of cheese and bits of meat, preferably salami.”  Yes, please!  Vegetarians feel free to substitute anything you want for the salami, or just leave it out entirely.  Olives might be a fun substitution!  Unlike the others we’ve made so far, this bread can be made in one day.  The instructions begin on page 129 of The Bread Baker’s Apprentice.   Good luck and happy baking!

Want to Win a Free Book?

Deborah from Italian Food Forever is giving away a copy of The Bread Baker’s Apprentice! To enter, visit Italian Food Forever and leave a comment that relates to bread (talk about your favorite bread, a story about bread baking, etc). That’s it!  You can enter as many times as you want until June 15.  A winner will be chosen randomly.  Good luck!

Brioche from other BBA Bakers

For those of you who are participating in The BBA Challenge, how did you like the brioche?  Which version did you make?  How did you shape it?  Did you learn anything new while using this formula?

And finally I would like to say congratulations to Nico and his family, who just welcomed a brand new baby boy into this world.  And if you can believe it, Nico still managed to write about his brioche from the hospital.  Welcome, baby Tomas!