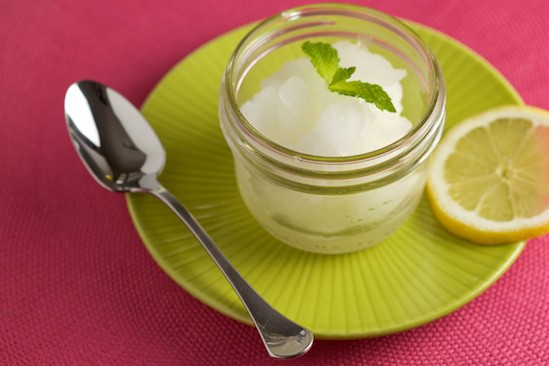 With today’s modern ice cream makers, frozen fruit mixtures like granitas and sorbets can be whipped up in no time! Usually containing only fresh fruit, water and sugar, Sicilian granita is one of the simplest frozen desserts breakfasts you can make.

We moved back to the California from Sicily a year and a half ago and one of the things I miss most is the granita from Catania. I can’t believe that it took me this long to figure out how simple it is to make granita at home!

My first attempt at granita was a few weeks ago, when I made brioche for The Bread Baker’s Apprentice Challenge.  Since I was making brioche for the first time, it only made sense that I attempt some homemade granita. In Sicily, granita and brioche are eaten together for breakfast during the hot months of summer.  It might sound strange, but don’t knock it til you try it!  You’ll also see Sicilians eating ice cream sandwiches of brioche and gelato, another tradition of which I highly approve!

So as I was saying, I made some fresh strawberry granita to go with my brioche.  It was good, but the fruit/water/ sugar ratio wasn’t quite right, so I need to give it another try.  It was the following week that a friend and food writer from Catania showed up unexpectedly on twitter.  And guess what she was tweeting about?  Brioche and granita!  She even shared a quick Lemon Granita recipe.  Of course I had to try it!

Although the textures vary from province to province, the granita I grew accustomed to eating in Catania is somewhat soft and slushy, rather than granular and icy.  By processing it in an ice cream maker until semi-solid, it is quick and easy to replicate the texture of the granita I know and love.

Like anything, the lemon granitas in Sicily vary in sweetness and tartness from bar to bar. Some are almost unbearably tart (I love those!), some are almost too sweet.  I’d say this one falls somewhere in the middle.  Please feel free to adjust the amounts of lemon juice and/or sugar to suit your own taste.

Now I just need someone to teach me how to make granita di mandorla (almond granita) and I’ll be even happier!

Heat water and sugar, stirring, until sugar dissolves.  Let cool completely.  Stir in lemon juice and refrigerate until cold.  Process in an ice cream maker until slushy, but not frozen completely.  Serve immediately.

Recipe notes: Lemon juice and sugar amounts can be adjusted to suit your own taste.  You may freeze leftovers, but keep in mind that it will freeze solid.  Just let it sit out at room temperature for 20 minutes or so, then stir with a fork until slushy again before serving.