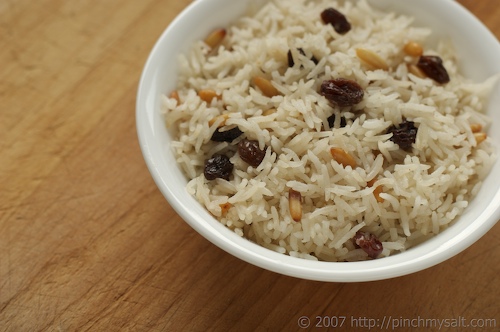 It’s been a while since I’ve posted a side dish recipe and since I’ve been making a lot of rice lately, I decided to share one of my recent favorites recipes with you.

Although our house was packed up last week, we still have lots of pantry items that need to be used up or given away in the next week and a half before we board the plane back to the states. Basmati rice happens to be one of those pantry items that I’m trying to use up!

Since I also have a box of raisins in my pantry as well as a few little bags of pine nuts in my freezer, I decided to try to recreate a rice pilaf from a really good Turkish restaurant that we like here in Catania. Justin and I were taken there last week by my co-workers for a farewell dinner and I was reminded how much I love one of their rice dishes. My favorite thing on the menu is the buttery pilaf with raisins and pine nuts.

It’s a very simple rice and the main flavor I could pick out, besides the nuts and raisins, was butter. And I know that they use a lot of butter in the dish because when a single grain of rice fell on the table at the restaurant, the grease spot that soaked the tablecloth was enormous! I wanted to create something that could be eaten more than once a year without guilt so I didn’t use as much butter as I thought the original dish probably contained!

I decided that browning the butter would intensify the flavor allowing me to use less butter but still keep a very satisfying buttery taste. But you know me, I didn’t skimp on the butter that much!

Since I really don’t know much about cooking rice and I know even less about Turkish food, I decided to check some Turkish food blogs for pointers. My favorite is Binnur’s Turkish Cookbook and it was there that I found a recipe for a Basic Turkish Rice Pilaf.

I used Binnur’s Pilaf as a general guideline for preparing this rice but I also took some rice cooking tips from an Indian cookbook, Madhur Jaffrey’s Indian Cooking. Like I said, I’ve never known much about preparing rice other than the directions that come on the back of whatever package I buy at the store. But one time I made the spiced basmati rice out of Jaffrey’s book and I swear it was 100 times better than any rice that has ever come from my kitchen!

So, like I said, I put together the rice cooking tips from those two sources, did some experimenting with amounts of butter and cooking liquid, and came up with the following recipe which I think tastes very similar to what I was trying to recreate.

Although the recipe looks long, it’s really pretty simple. I just got a little ‘wordy’ when I was typing it out!

1. Preheat oven to 350 degrees. Put rice in a large bowl and fill with water. Swirl rice around then pour out water, holding rice back with one hand. Repeat this process several times until water is fairly clear. Cover rinsed rice with hot tap water and allow to soak for 15 minutes. At this point, put the raisins in a separate small bowl and cover them with hot tap water also. After 15 minutes, drain as much water as possible from the rice (using a mesh strainer if you have one). Also drain the raisins and set aside.

2. In an ovenproof saucepan (one without rubber handles on pot or lid), heat 2 T. butter over medium-low heat. Allow the butter to brown just slightly, then scrape drained rice into the saucepan. Stir to coat with butter and saute for about two minutes, stirring constantly, or until the rice turns opaque and a few grains are just starting to color. Pour the water (or chicken broth) and salt into the pot, stir, taste, and add more salt if necessary. Bring broth just to a simmer then cover the top of the pot with aluminum foil and then put the lid on top of the foil (the foil creates a tighter seal). Place pot in the oven and bake for 20 minutes.

3. While rice is in the oven, heat the remaining tablespoon of butter in a small saucepan and allow to brown. When the butter starts to brown, add the pine nuts and cook just until the nuts have turned golden brown. Immediately scrape nuts and butter into a small bowl to stop them from browning too much.

4. After 20 minutes, remove the pot of rice from oven. Remove lid and foil, place a clean dish towel over the top of the pot and replace lid. Allow to sit for 5 more minutes. Next, gently scrape rice into a serving bowl and stir in the raisins, nuts and browned butter. Serve immediately.

Serves four as a side dish.

– I used basmati rice but feel free to use any type of long grain white rice.
– I’ve made this recipe with both water and chicken broth. The chicken broth adds a touch more flavor but water works just fine!
– If you use chicken broth instead of water, reduce the amount of added salt in the recipe. Try starting with a quarter teaspoon then taste it and add more if necessary. If using sea salt or table salt instead of kosher, start with a little less than I recommend. It’s easier to add salt later than take it away!
– You can use any type of raisins in this recipe. Golden raisins might look nicer but I used regular dark ones.

And just a quick reminder to cast a vote today for your Best Food Blog pick in the 2007 Weblog Awards. Remember, you can vote once every 24 hours until November 8th! If you haven’t done so already, you can go vote here.