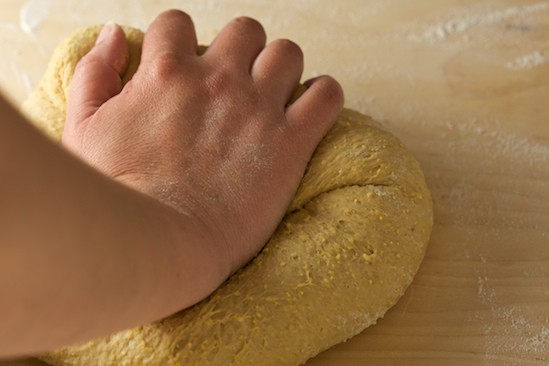 How could this have happened?

It all started with one innocent little tweet.  Yes, I said tweet.  This whole crazy thing started on twitter. It was a Saturday evening not even two weeks ago, and I was sitting at home thumbing through baking books.  This is always one of my favorite pastimes, whether I’m in the mood to bake or not.

Looking through my books, I started to feel the itch to bake bread again (for some reason this always happens as we get closer to summer).  I started thinking of all the bread I baked when we were in Sicily, of how much I learned during my marathon sourdough sessions, and of how much I have forgotten in the last couple of years.

Looking through my bread books, I realized that I have had some wonderful baking instructors sitting neglected on my bookshelves.  It was time to learn from them.  I decided on a whim to choose one book and use it as a textbook for the summer; the book I chose was The Bread Baker’s Apprentice.

Since my laptop is always within arm’s reach, it was inevitable that the decision to bake my way through The Bread Baker’s Apprentice was broadcast to the world via twitter within minutes of my making it.

Here’s what I wrote: “I need a challenge. Am thinking of baking my way through every single recipe in The Bread Baker’s Apprentice. Anyone want to join me?”

I didn’t really expect a reply other than maybe a few people telling me that it sounded like fun but who has time for such a thing.  Was I ever wrong.

Within minutes, I had four people wanting to join me.  And an hour later, we were up to 13. Two days later, word had spread so much that Peter Reinhart himself e-mailed me to show support for what we were doing.  The group grew to 100.  We created a map and joked about world domination.  The group kept growing.  And then it happened, 9 days after my first BBA tweet, our crazy group of bread bakers grew to 200.

The last couple of weeks are a total blur.  Somehow we have come together from around the world and we are baking bread together.  We communicate via e-mail, blogging, twitter, a google group, a flickr group, and even a Facebook group.  We share photos, we ask questions, we give advice.  There are a few who before this group had never baked a loaf of bread, there are some who have been baking for 30+ years.  We are all learning from each other and it’s like nothing I’ve ever experienced.

We will be baking together for the better part of a year.  We have 43 recipes to tackle and will be working at a pace of about one bread per week.  Some people will be baking faster than that, some will be taking it slower, but we’re all staying connected through the process.  And through Pinch My Salt, you will stay connected to us, too!