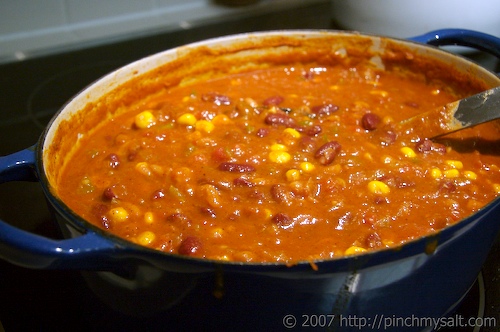 This is still on the stove and I’m not quite through fiddling with the seasonings so I won’t give you the exact recipe just yet. But it’s a simple one that I just threw together so you really don’t need an exact recipe!

Here’s what I’ve got so far: One chopped onion, one chopped bell pepper and a couple cloves of minced garlic sauteed in olive oil. To that I added one large can (28 oz) whole tomatoes and chopped them up with the spatula in the pot. Then added 2 cans kidney beans, one can pinto beans and one can of great northern beans (all of the drained and rinsed), some vegetable broth (that’s a lie, I used chicken broth but since I said it’s vegetarian, we’ll pretend it’s veggie broth!), and a small can of tomato paste. Then I started dumping in some chili powder (a couple of tablespoons at least), cumin (about a tablespoon or so), seasoned salt, sea salt and black pepper. I think that’s about it. It’s been simmering for a while and I just stirred in some frozen corn. After I finish writing this, I’ll adjust the seasonings a final time and turn off the stove.

We might eat a little of this tonight but I think it will taste better tomorrow. Tomorrow I plan on putting it in a baking dish, covering it with cornbread batter and baking it. I’ve never tried that before but several people mentioned it in during our cornbread discussion and I think it sounds really good! I think I might stir some grated sharp cheddar cheese into the cornbread batter before putting it on the chili. Tune in tomorrow to find out how it turned out.

Previous Post: « What Do You Eat With Cornbread?
Next Post: Whole Wheat Pumpkin Muffins with Cranberries and Walnuts »