As I have already mentioned, today I share a birthday with my cousin Jason. A week ago he e-mailed me and requested that I create The Ultimate Manwich recipe for his birthday and post it on Pinch My Salt. No other instructions or descriptions were given. He just asked for an ultimate homemade Manwich recipe.

I actually love it when I get requests to create something! Remember Ruby’s request for Pumpkin Scones?

Jason makes these requests fairly often but they are usually off-the-wall combinations of ingredients that I don’t bother to take seriously. However, I knew I could come up with a good homemade Sloppy Joe recipe so I was excited about this one!

Those of you who aren’t in the United States probably have no idea what a Manwich is. Manwich is the brand name of a seasoned tomato sauce that is mixed with cooked ground beef and put on a hamburger bun or bread to create a sloppy joe sandwich.

The sandwich is typically called a Sloppy Joe, although I am sure there are other names for it. I’m pretty sure I liked to eat manwiches as a kid, but I am really not a fan of the canned Manwich sauce nowadays.

I tried it a couple years ago and swore I would never buy that stuff again. Yuck! But, Sloppy Joes are fun every once in a while so now I just make them from scratch. I’ve even previously written about one of the recipes I tried but I’ve always wanted to come up with a better homemade manwich recipe.

In order to make a traditional Sloppy Joe recipe into an Ultimate Manwich, I knew I needed to add something extra. Sloppy Joes are often a little sweet (sometimes a lot sweet). Since I love the combination of sweet and spicy, I knew I would first have to add some extra heat.

I could have just added extra crushed red pepper or thrown in some fresh chiles. But it occurred to me that one more flavor would go perfectly with the spicy and sweet. Smoky! I decided the perfect solution would be to add some canned chipotle peppers in adobo.

Chipotles are smoke-dried jalapeño peppers and in grocery stores you will often find them canned in adobo sauce. The chipotle in adobo would add both the spice I was after and a hint of smoke. And the delicious adobo sauce adds even more flavor.

Now I knew I was on to something but I thought I might need one more thing to make this homemade sloppy joe sandwich ‘The Ultimate.’ What’s one ingredient that makes just about everything better? No, not bacon (although the thought did cross my mind).

I decided to stir in some extra sharp cheddar cheese at the very end. Just enough to add that extra dimension of flavor and some extra ‘sloppiness.’

Yesterday, I started looking through previous homemade sloppy joe recipes I had tried and even some I hadn’t. Before heading to the store, I created a list of ingredients I knew I wanted to use:

Looking at my list, I knew it was going to be good before I even started making it! I picked up all the ingredients yesterday afternoon and had planned on making these then. But as you might have read yesterday, I lost my momentum and decided to make them first thing this morning instead.

So this morning I got up and gathered my ingredients.

First, I chopped the red bell pepper, onion and two cloves of garlic.

I also chopped up one chipotle chile and set it aside.

I poured a couple tablespoons of olive oil into a large skillet and turned the heat to medium.

Next, I added the onions and red bell peppers (not the garlic yet).

I cooked the onions and peppers over medium heat, stirring regularly. This is what they looked like after five minutes.

But I kept cooking them until the onions were just slightly brown and the peppers were getting soft. After seven minutes, I added the garlic and one chopped chipotle chili and cooked, stirring, for one more minute.

I didn’t forget the chili powder, I just ended up not needing it after all.

I was tempted to add more salt at this point but decided that since I wanted to season the ground beef as it was cooking, I would wait until the end to decide if it needs extra salt.

Since I wanted the sauce to be somewhat similar in appearance to what comes out of the can, I decided to puree the mixture in a blender. I let it cool slightly then spooned it into the blender.

I then pureed the sauce until it was fairly smooth.

After it was the consistency I wanted, I just let the sauce hang out in the blender while I prepared the ground beef.

I started by rinsing and re-using the same skillet I had used for the sauce. I heated the skillet over medium heat and crumbled about one pound of ground beef into the pan.

While it was cooking, I seasoned the meat with half a teaspoon salt, some fresh ground black pepper, and a generous pinch of crushed red pepper. I cooked the meat until it was almost fully cooked but still a little pink in some spots.

As you can see, my beef wasn’t very lean! But that’s ok, because I just poured off all the fat.

After draining the fat off the ground beef, I poured in all of the sauce from the blender.

I stirred it all together and set the heat to medium-low.

I cooked the mixture, stirring constantly until it was bubbling and had thickened enough to where it was ‘moundable’ enough for a sandwich. Then I turned off the heat.

Now it was time for the cheese! I chose yellow cheddar over white because it matched the color of the sauce. 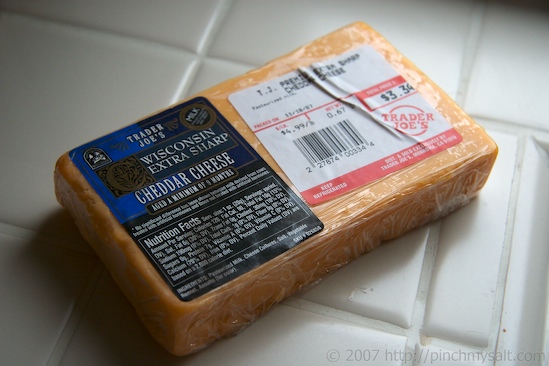 I shredded about one cup of cheese (3 oz. or so) and added it to the sauce mixture.

I gently stirred in the cheese and my Ultimate Manwich filling was finished!

It was now ready for a bun.

Guess what I ate for my birthday breakfast?

Yes, I really did eat this at 10:30 a.m. for a late breakfast. I hadn’t eaten yet and believe me, this sandwich was pretty irresistible. I couldn’t finish it all but that’s because I had overloaded it with meat for photographic purposes, but I’m pretty sure that Jason would have eaten the entire thing if he were here.

So, that was Jason’s Ultimate Birthday Manwich. And guess what I have decided to call it?

I had to name the sandwich after him because even though he doesn’t have a food blog, Jason was nice enough to create and name a sandwich after me in honor of my birthday. That’s right, Larry David isn’t the only one. There is now a sandwich called The Nicole.

Hope you have enjoyed my saucy beef sandwich experiment! Happy birthday, Jason and happy birthday to me as well.

To reduce the heat for kids, you can use less of the chipotle chili and adobo sauce or even omit this ingredient entirely. You can also leave out the pinch of crushed red pepper.